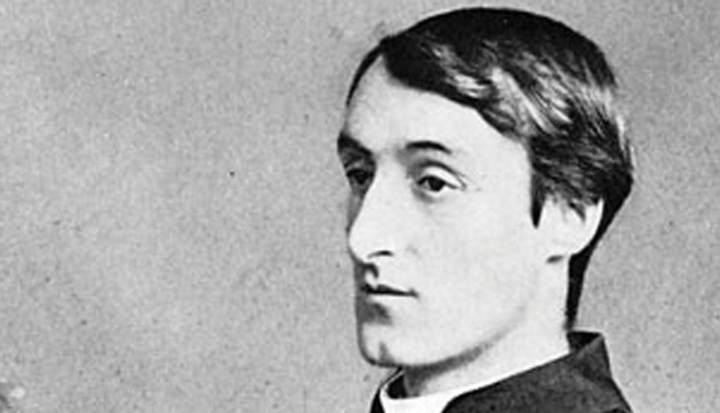 “Glory be to God for dappled things.” So begins “Pied Beauty,” a poem by 19th-century Jesuit priest Gerard Manley Hopkins. The poem praises God with the observation that “all things counter, original, spare, strange” are worthy of appreciation rather than derision. Packed with fresh imagery delivered through tight syntax, the poem feels out-of-time, the work of an imaginative author in love with God.

I was first introduced to Hopkins’ poetry as an undergraduate by a professor who was quite comfortable articulating her atheism. Hopkins was presented to us as a genius of language, a writer who shattered the reserved conventions of Victorian literature. I love his inventive wordplay, but what first attracted me to Hopkins was his willingness to praise God. The divine is not quite absent in contemporary poetry, but God is usually spoken of in ironic terms, as a metaphor or as some nostalgic belief that has been replaced with a secular devotion to art.

The poetry of Gerard Manley Hopkins showed me that it is possible to wed the intellectual and emotional strands of Catholicism. For years I was quite satisfied with the intellectual element of the faith. My father’s Jesuit education and consideration of the priesthood influenced my perception of what belief meant.

But the Bible is perhaps the ultimate living text, so layered that it holds many interpretations and surprises, even to the most veteran observer. And faith without emotion is mere scholarship. The emotional pull of faith—the acceptance of ambiguity, the desire to sacrifice oneself to mystery—is what makes Catholicism unique.

Born in 1844, Hopkins converted to Catholicism in 1866 while studying at Oxford. The conversion of John Henry Newman had started a movement of Anglican intellectuals to the Roman Church. In fact, Hopkins wrote a letter to Newman lamenting his parents’ rejection of his beliefs: “Their answers are terrible: I cannot read them twice.”

Hopkins was studying under Matthew Arnold and Walter Pater and had begun a close friendship with Robert Bridges, the future poet laureate of England. Hopkins became a Jesuit, but was not an exemplary priest; he was no preacher, no stirrer of souls. Rather frail, Hopkins was relegated to teaching elementary Latin and grading nearly 5,000 examinations a year.

His artistic sense was in constant conflict with his religious sense. Although the result of this paradox was poetic genius, it tore Hopkins apart. Before joining the Jesuits, he attempted to burn all of his poems. He “resolved to write no more, as not belonging to my profession, unless by the wish of my superiors.”

A newspaper account of the destruction of The Deutschland, a German steamship bound for New York, awakened Hopkins’ poetic pulse. He was particularly moved by the death of five Franciscan nuns, exiles from Germany who bore witness to their faith until the end. “The Wreck of the Deutschland” is Hopkins’ longest poem, at 35 stanzas. The final verse begins: “Dame, at our door/Drowned, and among our shoals/Remember us in the roads, the heaven-haven of the Reward.”

Though art and God seemed incompatible to him, Hopkins unified the two in verse like no other poet before or since. According to critic W.H. Gardner, it is best to think of Hopkins as a poet of nature, a poet of innovation, and a poet of faith. I would add that Hopkins is a poet of strangeness, and I mean that word in its best possible connotation. Christ’s presence in the gospels is a strange event: He shocks and upends the social and political order, forcing all to reconsider traditional assumptions about the world.

In much the same way, Hopkins’ poetic strangeness allows him a level of piety that might seem melodramatic for other artists. One of the least appealing moves of writers is preachy devotion; some wish to be congratulated for their faith. Hopkins taught me what it means to be authentically, fully, and even ecstatically religious as an artist. Consider “God’s Grandeur,” which begins “The world is charged with the grandeur of God.” A powerful line. God is not simply present in the world; God is grand, God charges the world with God’s presence.

For Hopkins, God is not concept but action. God is a verb. In “The Windhover,” a speaker is in awe of a falcon’s peculiar flight: “High there, how he rung upon the rein of a wimpling wing/In his ecstasy!” In contemporary poetry, usage of an exclamation point is apostasy. For Hopkins, it is natural.

As a poet and writer, Hopkins inspires me to see that language does not merely document the observed world but is a force to transform a reader’s perception and appreciation of that world. When I feel like I am becoming lazy as a writer—when my descriptions are plain or I lapse into cynicism—I reread rich poems like “Harry Ploughman” to renew my art. Hopkins taught me that writing is a vocation, an activity to which devotion is similar to prayer.

Although I have learned much from him, I hesitate to speak publicly about my faith with the same verve as Hopkins, and that is a shame. Believers have allowed a misguided fear of secular culture to make faith a scandal. I do not mean to merely implicate unbelievers here. Christians often choose superficial, pointed pronouncements of belief as rhetorical bludgeons, as if they can shake others into accepting Christ.

Hopkins’ passion does not reside in a hard-headed desire to proselytize. Hopkins lived and breathed God. His poetry was birthed deep in the gut and shouted on the silent page.

Hopkins died in 1889 of typhoid fever. His poems were not published until 1918. Although he guarded his art for fear his poems were vain acts, his verses are documents of charged belief. I am remade by his words of divine appreciation: “He fathers-forth whose beauty is past change:/Praise him.”