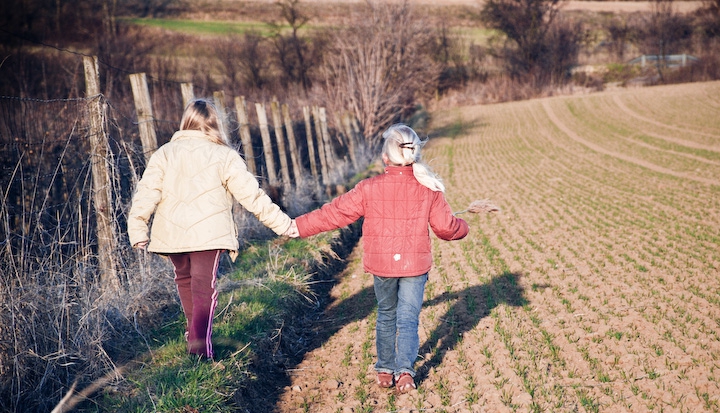 You “fall into” love, but you do not “fall into” friendship. Yet you can “fall out of” friendship. At least the dictionaries and phrase books are ready for such an experience. We talk about people no longer being friends; they “had a falling out.”

What is different, what is special about friendship that makes it irregular to fall into it but not to fall out of it? One clue is this: you have to work at being a friend, while you cannot help being in love.

Max Scheler, the late German philosopher on whom Pope John Paul II wrote his doctoral dissertation, helps us think through what “falling in love” means. Love is the primal act through which we see and know things differently because we abandon ourselves so that we can participate in another being. Falling into and being in love mean a change of heart, so that we see all the world with new eyes and become open to new values. Scheler compares all this to repenting. Thus falling into and being in love are true liberation from the old ways of being, seeing, knowing, and holding to the self.

Now, I catch myself doing what the philosophers and theologians tend to do: they set out talking about friendship and end up talking about love. The act of sliding from the one topic to the other can provide a second clue to the nature of friendship and to the care and feeding thereof. Once more, then, back to the difference between love and friendship and back to our metaphor of falling in and falling out.

Scheler likes to talk about how being in love is finding oneself on a whole new level of existence. Yes, level—like that of a mountaintop. People see and know everything from a vastly different perspective than when they are on the plain, in the valley, or caught in the narrows. Yet, to make the metaphor work all the way, we have to picture the person who has fallen into love as being dropped suddenly—call in the helicopters!—to that peak from which everything is and looks new.

Not so with friendship, which must work without the figurative helicopters because it involves a slower climb. Here I seize the idea of repentance as Scheler saw it and use it not to describe falling into love but attaining friendship. Repentance, a series of acts, represents an ascent. Just as when climbing a mountain, we see both the summit’s approach and the valley sinking beneath our feet—each picture enters under the control of the one act. So it is with repentance: one repents and in repenting sees one’s former selves fall away.

That’s it! That’s where friendship comes in. You do not alight on a peak experience, you ascend to it. But you can fall off the peak or fall from whatever point was attained—just as you can fall out of love.

I do not want to downplay the value of suddenness in the experience of finding friendship and being a friend. Watch the child insecure in her selfhood, who comes running with a smile on her face and another child’s hand in her hand: “I have just found a best friend!” Recall the alcoholic who finds the first experience of friendship in support groups of a life-transforming experience. Know that your snubbing of a friend or breaking off a vital friendship for selfish reasons can be shattering in its abruptness. Still, we reserve a different sort of language for friendship than for love.

I catch myself a second time slipping off into language that compares friendship to love. This tendency, common to many, suggests why the philosophers and theologians do not deal much with friendship. They favor the grand-scale experiences, so they use rivers of ink to develop the concepts of hate and love. The moralists, too—professional and populist alike—skip over friendship and devote themselves to sex.

When have you not seen sex as a cover headline on the tabloids at the checkout counter? When have you ever seen friendship, unless it is of the “great and good” sort, which is a snide code for “being in a sexual relationship with”? (Friends, by the way, can be in a sexual relationship with each other; some spouses are each other’s best friends. But their friendship is a gift or achievement separate from their being in love or having sex.)

So two cheers for friendship; sing for a moment its praises. Think for a second of how it compares to music. Bach—as in J.S.—once said that music was God’s highest gift to God’s sorrowing creatures, a gift that gave them a joy worthy of their destiny. So it is with friendship. We are created for joy, but we have fallen: fallen out of love, out of friendship, and off the higher levels of existence. But we have a destiny, and friendship, like music, gives us in the midst of fallenness some joy worthy of that destiny.

After sounding the hurrahs and hallelujahs for friendship, however, there remains the task of seeing more of what it means, how it happens, what is distinctive about it. I said that it has to be worked at. Yet that notion of working is very delicate and puts one in a precarious situation. For working at friendship implies a certain grimness as if one strained results from a certain self-obsession. But self-obsession would deny the nature of what one seeks to attain and does attain when finding a friend, having a friend, or being a friend.

Friendship involves an element of play, of liberation from the self-enclosed self. Let a friend work too hard at a relationship and we find ourselves withdrawing because we fear we are being used. Friendship is a teaming up that demands that each partner become a “Thou.” But when friendship is manifestly worked at, compulsively offered and demanded, I become an “It”—a device, a means.

Watch someone work at friendship, and you will see someone who is climbing the figurative mountain but being literally so engrossed in the act of climbing—the use of muscles, the hanging on to rock ledges—that he or she never experiences the exhilarating view from each new level.

That is why it is preferable to speak of friendship, of being a friend or having a friend, as a way of being more than doing. Having already drawn on a German source, we can draw on a French one, Gabriel Marcel, on whom the pope did not write a doctoral dissertation. Long ago I fell in love with Marcel’s patented concept of disponibilité. This means that I came upon a new way of seeing and knowing (and aspiring to being), when that concept imposed itself on my consciousness.

No, I cannot translate disponibilité—no one can, everyone says. Yet everyone who deals with the concept has to try. Certainly it carries the connotation of “being at the disposal” of someone else. The most frequent English coloring of the word has to do with being available.

Being available, in the Marcelian sense, involves an attitude, a posture, a signaling that draws on the deepest elements of the self. Disponibilité does not mean standing around with nothing to do and engaging in the public-relations stunt of smiling at everyone and tagging along after them. It cannot mean not being fully scheduled, nor lacking a rich life wherein zones of privacy and reserve get protected. And by no means can it mean that one is never to find solitude and silence. The person who is available, who bears the qualities we associate with disponibilité, can instead engage in what I like to call “creative schedule interruptions.”

That is what a friend does. In the midst of busyness, being occupied or overscheduled, the friend is someone we count on to know to what and to whom to give priorities.

One way to throw light on this explanation is to notice why it is that celebrities do not have friends. Famous people can have friends, but celebrities cannot. The people we call celebrities have claques, groupies, admirers, reinforcers of fragile egos. No one who belongs to such groups can go up to a celebrity and say, “This time, my friend, you have gone too far!” Or: “Come off it!” Or: “Why are you down today? Can my being with you help lift you?” The problem is that the celebrity has no disponibilité. He or she is never genuinely available to others or to the Other. The celebrity is a god, of a sort, and does not need humans and is not amply human.

If the celebrity cannot be a friend because he or she is a god, what about God? Can God, the real God beyond gods, be a friend? That question gains importance when we picture that whatever else God is to the faithful, God is what medievals called an exemplum, an example from which one measures.

“God is love,” we hear on the highest authority (though not “Love is God”). God is, imparts, and exemplifies what humans mean when they talk about Beauty and Truth and Goodness and all those capitalized terms. What about God being, imparting, and exemplifying the middle-sized, non-capitalized things, such as friendship?

Here God breaks the rules of middle-sized exempla, for it is legitimate (if rare) to speak of God as Friend. There are also a couple of instances where Christians, who have a care about Jesus of Nazareth as an exemplum, an embodiment and a model, connect him with friendship. For instance, the gospels picture Jesus being at the disposal of smelly company: the “friend of tax collectors and sinners.” Jesus pointed to the character of friendship by being ironic in addressing his betrayer as “Friend.” He was caught crying only once, when “our friend, Lazarus” had died.

In the Gospel of John there is the single breakthrough where Jesus calls his apostles friends. In the same passage (John 15:13-15), the evangelist overhears Jesus defining the most profound disponibilité, or availability: “No one has greater love than this, to lay down one’s life for one’s friends.” So love and friendship, at certain levels, do get tangled up with each other.

Friendship, not fallen into but attained through countless steps or acts in which two or more people are available to each other, acquires a beauty of the sort the sterling silver spoon acquires through the acquisition of thousands of little mars, scratches, scrapings, and abrasions. The first of these to occur seems to destroy the beauty. So can the first acts of friendship when tested: it makes demands. But, when responded to, the second and the thousandth acts of response contribute to the more richly figured beauty that comes with a life well lived. In relationship.