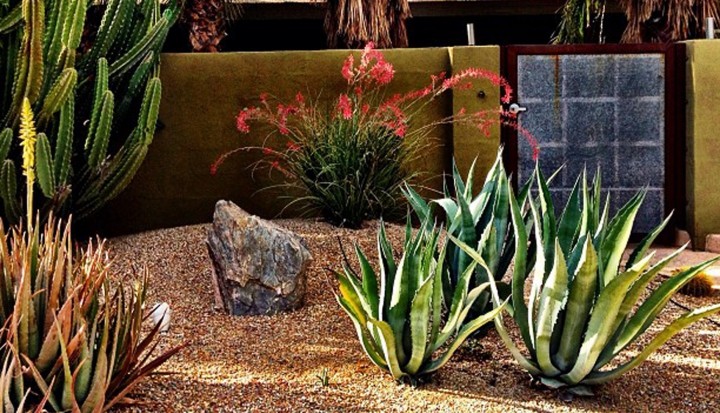 I sat down on my parents’ front lawn in Los Angeles and breathed in the fresh air. I dug my hands into the dirt, relishing the feeling. Then I began tearing out the grass. I despised the grass, in particular the amount of water it wasted in California’s record drought. I hated how yellow, brittle, and bald it was. I hated how difficult it was to remove, because of the thick roots that ran deep.
But as I sat on the grass, tearing it up with sore arms and back, my rage slowly dissipated. I focused on the task at hand and thought about the desert garden I would plant. I envisioned a drought-tolerant garden full of cacti and succulents.
Three weeks earlier, I had arrived from New York City. I had just been fired from my job as an assistant editor and been diagnosed with bipolar II disorder, and I was reeling emotionally and mentally. Once I was in Los Angeles, I realized that I needed to focus on my recovery. I needed to stay.
During those early months in Los Angeles, gardening allowed me to envision a future that was brighter than the present. After I removed the grass, I was able to move on to what many gardeners find to be the most exciting part of gardening: planting. I went to different nurseries and succulent fairs, seeking out exotic and strange plants that would survive with little water. I bought my favorites—golden barrel cacti—and imagined them growing into the large field I admired at the garden store.
Depression had tricked me into believing I was alone, but gardening drew me outside and into the world. I began to form deep connections with people around me. My mom and I collected numerous varieties of plants. My dad borrowed a pickax and began hacking away at the other half of the lawn. When family friends learned of our project, they started to donate plants. They gave us beautiful red aeoniums and ground coverings that soon spread over the bare soil.
I met Mike and Diane, a retired couple who stopped by to encourage our hard work. They had lived in the neighborhood for 30 years, but never crossed paths with my parents, who lived right around the corner from them. Dedicated environmentalists, Mike and Diane had removed their lawn decades ago. Their front yard is populated with drought-tolerant shrubs and edible vegetables and trees. Today, they are close friends of mine. They allow me to use the studio in the back of their house as an office and have given me small plots of land to plant vegetables and herbs.
People often say that California has no seasons, but gardeners know better. Each season gives me something to look forward to. Because of the mild weather, our growing season is remarkably long. In September, I plant greens like kale and chard that can withstand the cold; a little frost even makes them taste better.
I am grateful and ecstatic whenever it does rain. My family installed six water barrels and the first time it rained, we excitedly stepped outside in raincoats with flashlights to check on their progress. We gleefully reported when one barrel filled up. During the drier months, we use this water for our plants and trees.
In his recent visit to the United States and in his encyclical Laudato Si’, Pope Francis reiterates his message of caring for the planet. His words are a mandate to all of us—not just politicians and policymakers, but everyday people. Taking care of our planet is a social justice issue. We have a moral and spiritual responsibility to care for our common home. And so, in California, we are not only conserving water, but increasing biodiversity with native plants and reducing our use of fossil fuels. With fewer lawns, fewer people use gas-powered lawn mowers and leaf blowers. Growing edibles also cuts down the amount of fossil fuels it takes to transport food to grocery stores and markets.
When I first arrived in California two years ago, my life felt so small. I felt isolated and purposeless, but gardening has given me joy, purpose, and a community. I draw inspiration from my plants. When we first planted our succulents and cacti, I didn’t realize how much water they would need to establish themselves in July’s bruising heat. Those that really had trouble, we pulled and gave them shade and water. And then, with just a little care, they rebounded, as strong as ever.
The plants that survived that first summer are truly resilient. They have established deep roots and need little water, even during the summer. I, too, have learned to take care of myself and have survived the darkest periods of my life. I am stronger emotionally, mentally, and spiritually.
This article appears in the January 2016 issue of U.S. Catholic (Vol. 81, No. 1, pages 45–46).
Image: Flickr cc via ltenney1225
Tagsecological justice encyclicals Personal spirituality Practicing Catholic

Christine Lai is a writer living in Los Angeles.