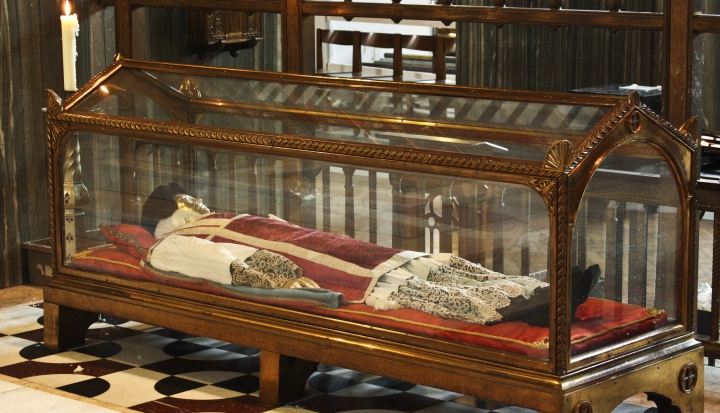 The word relic denotes antiquity, but in just the past couple years, this centuries-old tradition has been causing a bit of medieval-style controversy. In September of 2014, the beatification process for Archbishop Fulton Sheen was postponed indefinitely, largely because of a dispute over Sheen’s body. (Sheen was an Emmy Award-winning television and radio personality who became a midcentury pop culture icon preaching and teaching on Catholic theology, making him one of the world’s first televangelists.) While the location of the archbishop’s body is not in question—he’s buried beneath St. Patrick’s Cathedral in New York City—the future location of his corpse is something of a bone of contention.

The Diocese of Peoria, Illinois, which Sheen first called home, is asking that his body be returned to further the cause of beatification. Cardinal Timothy Dolan of New York City has been hesitant to hand over this precious cargo, citing Sheen’s last wishes that he be buried in New York. While the charismatic Sheen’s fame lay in his ability to modernize the way the Catholic Church reached out to the world, the controversy over the archbishop’s body seems ancient. In reality, it is only the most recent example of a fascinating tradition that reaches back to the dawn of Christianity.

As Christianity came to dominate the Roman Empire, the Christian focus on the physical remains of departed saints revolutionized the geography of Christendom, establishing the tombs of great saints as centers of pilgrimage as well as trade and commerce. Bodies of saints were considered something like public Christian property: Their bones and flesh were often dismembered and distributed across the globe for veneration among the faithful.

A medieval Christian city could thrive or wither depending on the provenance of the bones buried beneath the cathedral floor. While the church in Rome was literally built upon the ”rock” of St. Peter, other claims to such spiritual authority have rested on less solid foundations.

The Venetians, hoping to expand their reach in Northern Italy and across the Mediterranean, decided they needed to adopt a patron saint whose spiritual pedigree matched their commercial success. They settled on St. Mark and his lion, despite the fact that the evangelist’s tomb rested across the sea in Egypt. Undeterred, Venice orchestrated a secret mission to exhume and relocate the remains of St. Mark to Venice. Wrapping the saint in pork to deter suspicious but pious Muslim custom agents, they spirited Mark’s bones back to Venice.

In recent years, scientific achievements have given scholars new ways to analyze such popular relics as the Shroud of Turin and the miraculous tilma of San Juan Diego. Despite a rising tide of skepticism, the new scientific treatment of these relics has raised awareness of the importance of physical remnants, even beyond traditionally religious circles. This is something that Archbishop Sheen, the modern master of Catholic evangelism, would likely smile to see.

Hardly lost to history, the graves and relics of saints give us a proximity and intimacy with the dead that is impossible to experience at a distance. When Jesus rose from the dead, Thomas refused to believe until he could touch Christ’s risen body with his own hands. As Catholics in a physical world with roots extending far into past, we crave the same kind of intimate connection.