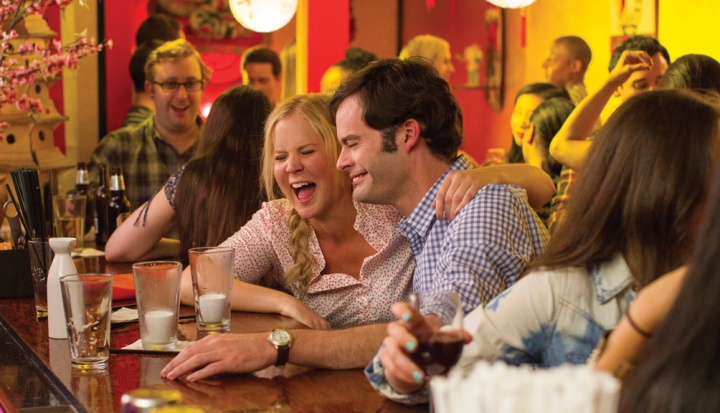 This summer, comedy fans were promised that Amy Schumer plus Judd Apatow would equal comedy gold. Schumer’s Comedy Central sketch show Inside Amy Schumer has become essential viewing for the culturally savvy, while Apatow’s resume includes directing Knocked Up, producing Bridesmaids, and, along with Lena Dunham, creating the HBO series Girls.
That’s why, on a rare night out, a friend and I bought tickets for Trainwreck, a film I’d otherwise have waited to see on the small screen from the comfort of my own couch.
Walking out of the theater, we commiserated that despite how Schumer is enjoying widespread acclaim for her deep commitment to feminist comedy, it was two male characters, played by Saturday Night Live alum Bill Hader and basketball superstar Lebron James, who kept the film from being a, well, total trainwreck. We didn’t even stay for the credits, a practice that for me is practically ritual.
The film was funny in spite of Schumer, disappointing since Inside Amy Schumer recently won a Peabody Award for its “smart, inquisitive, irreverent, and important brand of culturally aware humor.” The show’s segments are routinely shared and celebrated online by outlets such as Jezebel and New York Magazine, indicating her appeal among younger audiences, especially women.
One of Schumer’s schticks, if you will, is to take tired comedy tropes, stereotypes, and many of our culture’s sexist blindspots and satirize the hell out of them. Her comedy is smart, critical, and an important voice in contemporary feminist dialogue. It is also gross, often to the point of vulgarity, a style she stays true to on the big screen.
But it isn’t the sophomoric situational humor that derails this film about a “trainwreck” who indulges in countless vices, mainly in the form of casual sex and binge drinking. Instead it’s the almost sociopathic self-centeredness of Schumer’s character (also named Amy) as well as her extreme lack of depth. She treats people like garbage and has zero interest in anything or anyone that does not immediately serve her. “Ladyjerk” is how Caroline Belden accurately refers to her in a Commonweal review of the film. What’s worse is that it’s all played for laughs.
That’s also a problem with the title character of The Mindy Project, a TV show by Mindy Kaling, where she also plays a character with her own first name. Mindy Lahiri is a successful OB/GYN in Manhattan, addicted to trendy clothes and tabloid culture. Like Amy of Trainwreck, Dr. Lahiri is self-involved and shallow. Kaling herself described her character as “delusionally confident” and “unapologetically selfish.” Her antics are PG-13, more suited for prime time TV, and no less troubling than Amy’s. (Fox cancelled The Mindy Project after three seasons, but a fourth season is in the works for Hulu.)
Some see these kinds of characters as a pendulum swing away from archetypes—like the girl next door, brought to you by nearly every romantic comedy ever produced, or the manic pixie dream girl, a trope made famous first by Elizabethtown and often seen in dramas with a “sensitive” male protagonist, such as Garden State and Almost Famous. Both types play to male characters’ interests, needs, and desires. By placing self-obsessed narcissists in starring romantic comedy roles, Schumer and Kaling are credited with subverting a narrative that claims to be about women but really still serves the interests of men.
However, Trainwreck and The Mindy Project try to have it both ways. Rather than a clearly articulated satire of romantic comedy, viewers are invited to emotionally invest in Mindy and Amy in spite of themselves, rooting for them to land the guy and live happily ever after. It’s easy to speculate that selfish character traits were the only subversive element that survived the notes from producers and studio executives along the way.
And if that is the only feminist blow these characters are allowed to strike, what does that say about the state of gender relations? We’ve gone from “free to be you and me” to “free to be a ladyjerk.” Just how much progress have we made if what we celebrate is that if a man can care only about himself, so can a woman?
Just because some men are jerks doesn’t mean our prominent female characters should be jerks too, especially when that jerkiness is what’s meant to make us laugh. It feels too much like mean girl behavior to me.
Some writers, such as Belden in her Commonweal review, applaud Amy for being “unapologetically herself” in the film. And while Belden argues that Amy doesn’t seem to fall into the “falsely supportive” mentality of “you do you,” it’s precisely this attitude that Schumer, Kaling, and their fans embrace. Only instead of cheering on something quirky, it’s something jerky.
Perhaps it’s unfair to ask for more from these characters. Shouldn’t Amy Schumer and Mindy Kaling get to create whatever characters they want to create, without the burden of having to speak on behalf of women? They’re comedians, after all, and what they create is first and foremost meant to make us laugh.
So instead of expecting, I’ll keep on hoping for something better from these supremely talented writers.
This article appeared in the October 2015 issue of U.S. Catholic (Vol. 80, No. 10, page 38–39).
Image: Courtesy of Universal Studios
TagsCulture in Context TV and film