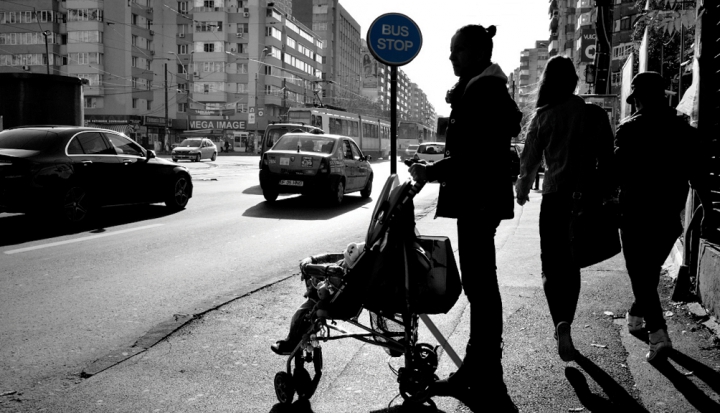 We had been conversing pleasantly when the bus driver turned to me and said, “I never meet people like you on this bus.” I wanted to ask what he meant, but I suspect I know. My two children and I often stick out. In almost a year of regularly riding the bus in Austin, Texas I have yet to see another white woman with kids. In fact, I rarely see any white women at all.
My kids and I take the bus a lot. We have a car, but my husband uses it for work. When we moved to Austin a little less than a year ago, we were conscientious in choosing a location close to major bus lines so the kids and I would have some freedom. We ended up renting a house in a low-income part of the city, an area known for having the highest crime rate. The stores have bars on them. Some of the white families in the neighborhood teased us when we moved in, saying, “Welcome to the ghetto.”
I have to admit that my heart sank as we drove through our neighborhood that first day. How could I raise my kids here? Trash lined the streets and clogged the gutters. Broken-down cars sat rusting in the grass.
I felt even more uncomfortable the first few months of riding the bus. My daughter would cling to me as we took our seat next to a bearded homeless man with all his possessions crammed in plastic bags, smelling as if he had spent days in the unforgiving Texas heat without a bath. She would stare wide-eyed at a toothless woman’s gaping smile, then turn and whisper, “Where are her teeth?” I felt isolated realizing how few people spoke English and how little I was able to communicate in Spanish.
Although we felt uncomfortable at first, it has been our experience of riding the bus that has integrated us into the neighborhood. It has taught us powerful lessons about race, class, privilege, and most important, solidarity.
Solidarity is a tricky word to define. It is not a vague feeling of compassion but rather, as Pope Pius XI described it, an “intimate conviction” that all of us are part of the same human family. In Tattoos on the Heart (Free Press), Jesuit Father Greg Boyle writes that solidarity is achieved when people “break down the illusion of separateness” and “[work] for kinship rather than just offering service.” And Pope Francis, who has made solidarity a central theme of his papacy, describes it in terms of an encounter with others, as a “fraternal love capable of seeing the sacred grandeur of our neighbor, of finding God in every human being.” Solidarity pushes us to appreciate the invaluable humanity of our neighbors, not by romanticizing them but by coming to see them as kin—flawed and needy, but part of our family.
Riding the bus has challenged me to realize the implications of such a concept of solidarity. I remember walking to a bus stop in a particularly rough part of town one afternoon. Ahead, I saw a group of men drinking and shouting profanities at one another. I considered my options, but I had to catch this bus. So I walked forward. As I approached, one of the men shouted to the others, “Ya’ll gotta stop. We got babies over here.” He smiled at me and said, “I remember when mine were that little.” When the bus came he carried my stroller.
On another occasion a homeless man, Mike, told me about how the city has changed over the decades and how hard it is to find stable housing. I listened sympathetically and helplessly. During a lull in the conversation, I mentioned to my daughter that my lips were chapped from waiting at the bus stop in the wind. Mike started digging in one of his many bags, pulling out a new tub of lip balm. “I got lots of these,” he said, smiling. “You need it more than I do.”
In both of these encounters, I was treated as a neighbor in an unexpected way. It challenged me to overcome my own fear, mistrust, and prejudice so that I could act neighborly in return. I have indeed been challenged by the examples of people like Father Boyle and Pope Francis. But in the end, it is my neighbors themselves who are teaching me the most about solidarity.
This article appeared in the September 2015 issue of U.S. Catholic (Vol. 80, No. 9, page 8).
Image: Flickr cc via Jake Stimpson
TagsCatholic social teaching Economic justice The Examined Life