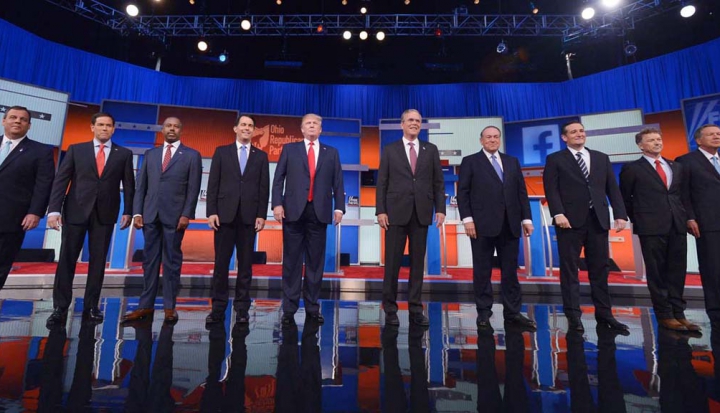 “Politics is a noble activity. We should revalue it, practice it with vocation and a dedication that requires testimony, martyrdom, that is to die for the common good.” – Pope Francis

Like many other progressives, I blame Fox News for abetting much that has gone sour in American public life. Unlike many of my fellow progressives, I also blame Jon Stewart’s snarky smugness. What Fox did to 17 potential future presidents last Thursday trivialized the candidates and, by implication, trivialized their dedication to public service. The belittling political “humor” of Jon Stewart’s Daily Show stokes a brand of political cynicism that is little more than a sneer masquerading as a chortle. American political life deserves better.

The Fox candidates’ event was not a forum for the discussion of policies and the common good. It was neither a debate about ideas nor a venue for the discernment of who might best serve the nation in its highest electoral office. From the opening moment in both segments of the event, it was a kind of game show, rigged for low entertainment—a race-to-the-bottom reality TV show replete with witchy “gotchas” and the salacious prospects that someone would be kicked off the island.  Following the cable network’s now long-established formula perfected by Bill O’Reilly and Sean Hannity, last Thursday night’s programmers dished out a stew of red meat. It was attack after attack, with no follow-up and never any effort to pursue matters in depth or with honest reflection. The old American Idol contest seems like an apt comparison, with Chris, Bret, and Megyn all pretending to be Simon. The “debate” demeaned not only the candidates but our political process itself.

I am not a Republican, but I recognize what Fox News apparently cannot. The GOP candidates for presidency are among our nation’s best and brightest governmental leaders, most with long track records of service to America’s citizens and the republic itself. Yet, Fox intentionally afforded no opportunity for any to disclose their statesmanship. Thursday’s event diminished each of these potential presidents. Citizens of any political persuasion should attend carefully to these candidates’ diagnoses of what ails the country and should thoughtfully assess their proposals for the common good. Fox News did not give us a chance to do so.

As for Jon Stewart, we should rejoice that his Daily Show is no more. Don’t get me wrong; I love comedy and humor. I also love political humor. Stewart, though, seldom achieved real humor. Humor raises the human spirit and degrades no one. Humor proceeds from a kind of equality, where we recognize our own comic foibles in the human condition, where we laugh with and not at others, and where ultimately the joke is on us all. Stewart, very differently, proceeded from a smug satisfaction about himself and from an unreflective self-righteousness about the superiority of his own in-group. From such comes low sarcasm, not satire. He mocked too often. For all it’s nodding toward a supposed ideal of diversity, the Daily Show was at times only a half-step away from bullying as it looked down its nose at those with values and mores different from Jon Stewart.

Comparing Stephen Colbert’s show with Stewart’s offers some traction here. Others have noted the difference in demographics between the shows, with Colbert appealing more to millennials and Stewart to gen-Xers, telling perhaps of a difference in idealism or maybe in generosity of spirit between the generations. Colbert, however, was consistently both funnier and more uplifting, because his comedy always began and ended by finding himself to be the joke.

The Daily Show with Jon Stewart and the Fox News presidential debate last Thursday are evidence of a larger problem plaguing American public life.  Public service is devalued. The practice of politics is trivialized. Governance is reduced to a game show or a joke.

As the above quote from His Holiness evidences, our church understands politics as a noble calling. It is not a necessary evil to be suffered. Politics for the church is moral and an essential activity of all human persons. Its essence is to discern what is genuinely good for the human community and, thereby, to build civilization. Catholicism’s renowned Doctor communis, Saint Thomas Aquinas, taught that politics were divinely ordained in human nature, that they are a fundamental part of what we were created to be by God, and that had Adam not sinned even paradise would have been a political life.

These teachings of the church about politics and governance are ideals, of course, from which any reality would fall far short. But, thanks to Fox News, The Daily Show, and so much of the same ilk in America’s public life today, we should worry that even as ideals we’re giving up on what politics is called to be.

Image: Fair Use via Fox News