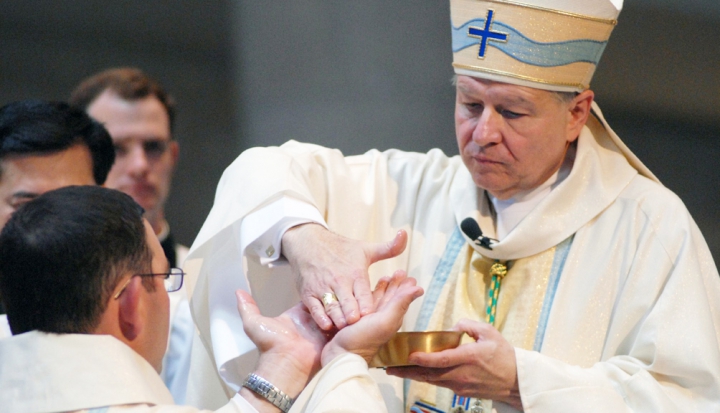 Have you ever wondered why a religious sister chose to join the Dominicans instead of the Poor Clares? Or why a priest entered a religious order instead of being ordained in his local diocese? Or why a man became a Franciscan brother?

For men and women discerning religious life, there are an almost overwhelming number of orders to consider, each with its own unique mission and lifestyle. Today, there is even a mobile app that helps people in discernment find the order that is the best fit for them. Whether someone feels called to minister around the world, serve the poor, stay in a small community, or pray throughout the day and night, there is likely a religious community in which he or she will feel right at home.
During this Year of Consecrated Life, we asked a selection of priests, brothers, and sisters to share the stories of how they found their religious order and why it is a perfect fit. Each person’s story, like the community in which they live, is unique.

God's love in a suffering world

By Sister Yolanda Tarango, C.C.V.I., who is currently the executive director of Visitation House Ministries, working with homeless women and children in San Antonio.

As a Sister of Charity of the Incarnate Word, I am happy and grateful to be part of a group of women who make a difference in the world.

As a young Latina in West Texas I was first drawn to the Incarnate Word Sisters because of their missionary zeal. They were committed to giving their students a first-rate education, which would change the future of my Hispanic community. I was inspired by their tireless dedication to service and commitment to the poor. When they were not teaching in the classroom they were involved in outreach to the poor and teaching us, their students, to recognize Jesus in the face of the poor and vulnerable.

We are an international and intercultural congregation that has created a variety of  ministries that responding to current needs, some of which have grown into large institutions. We work in close and direct service with our struggling and disenfranchised sisters and brothers wherever we find them.

What I love most about my congregation is the missionary spirit that is articulated in our founding call and that we are committed to living daily. “Our Lord Jesus Christ suffering in the poor, sick, and infirm of every kind seeks relief at your hands.” Though I might have been able to respond to this call as an individual, I have experienced the joy and gratification of being part of something bigger than myself and belonging to a group with a common purpose.

As our ministries have expanded, we have drawn into our community of service the many dedicated lay women and men who are our coministers. Together we respond to the mission of bringing God’s healing love and compassion into a suffering world.  This has helped me to understand that our congregation is characterized by our loving service in the world and not only by the number of sisters in our community. Our charism is to make the love of God a real and tangible presence in the world today, and I thank God for inviting me to live this call as a Sister of Charity of the Incarnate Word.

An abundance of joy

By Sister Xiomara Méndez Hernández, O.P., a Dominican Sister of Adrian, Michigan who serves as a chaplain at St. Rose Hospitals in Henderson, Nevada.

At times I believe that I was born with a smile on my lips. Growing up in Santo Domingo—the capital of the Dominican Republic, where we have summer almost all of the year—I remember that my mom would say to me, “Xiomara, close your mouth. The sun will burn your teeth.” This was because I was constantly smiling for no a particular reason.

When I was a teenager, I attended a retreat that was titled: “I came that they may have life, and have it abundantly,” based on John 10:10b. This verse resonated in me and touched me deeply. And it still does, as I reflect on the meaning of Jesus’ message. Joyfulness is at the essence of our lives, even in the midst of suffering.

Before I met the Dominican Sisters of Adrian, Michigan, I had no intention of becoming a religious sister because, in my experience, I rarely saw any sister being friendly or smiling. During Lent of 1994, I attended a retreat directed by Dominican Sister Ana Felíz, which included a liturgical dance by Dominican Sister Luchy Sori. I did not know they were sisters at the time because neither of them wore a religious habit. But Ana’s words were a call and invitation to develop a personal and close relationship with God and Luchy’s dance set my heart on fire. I was curious to meet them.

In time, I was invited to their home along with other young women to talk about discernment in our lives. While sharing and praying with them, I began to feel a call for the first time. With the Adrian Dominicans, I encountered sisters who were full of joy, women who work with love, passion, and compassion for justice and peace—and who also knew how to celebrate life.

At that time, I had decided to resume my studies for a master’s degree in fashion design, but a few years later I joined the sisters. Being Dominican by birth and now by religious vocation made me a double Dominican, which doubled my joyfulness.

Recently, a group of us were reflecting on how we experience this Dominican joyfulness in our ministry. We all agreed that it was in walking with one another, and with the poor, the suffering, and the marginalized.

Today, I feel very blessed to be a Dominican Sister of Adrian: a presence of this joyfulness in wherever I go and in whatever I do.

Living the life of a superhero

By Father José Lucero, S.D.B., the vocation director of the USA West Province of the Salesians of Don Bosco.

At the age of 19 I felt a strong call to serve young people. I also felt that God was calling me to live in community. The Salesians both serve youth and live in community, and so I heeded God’s call to become a Salesian.

The sole mission for Salesians is to save souls. Our founder, St. John Bosco, gave us the motto, "Give me souls, take away the rest." Our task is also to educate youth to become good Christians and honest citizens.

We educate using the "preventive system." This method of working with youth is based on three major components of relating to them: reason, religion, and loving kindness.

Unlike the repressive system which would be more of "do as I say, not as I do," method, we reason with youth, hence preventing misdeeds. Ours is a method that includes education, teaching the why and how, and instructing in the ways of our Lord, which is where religion comes in.

Through loving kindness we invite youth to consider that God calls them to greatness and wants to use their ordinary lives in extraordinary ways. This begins to happen when they see that we Salesians believe in them. It is empowering as they  allow us to accompany them.  Eventually begin to see that they too are Salesian, and are included in the mission of Don Bosco.

We live our religious life in the style of Don Bosco, which is with joyful optimism, and youth spirituality is our charism. So youthfulness and joyfulness beget what we like to call "Salesian joy," which becomes contagious. Being a Salesian is like living the life of a superhero in the sense that we affect the lives of youth wherever they are; schools, parishes, youth centers, juvenile halls, gangs, the poor, and the poorest of the poor, as well as those on the fringes of society.

To read additional discernment stories of people in religious life, view the original article, which appeared in the August 2015 issue of U.S. Catholic (Vol. 80, No. 8, pages 23–27).