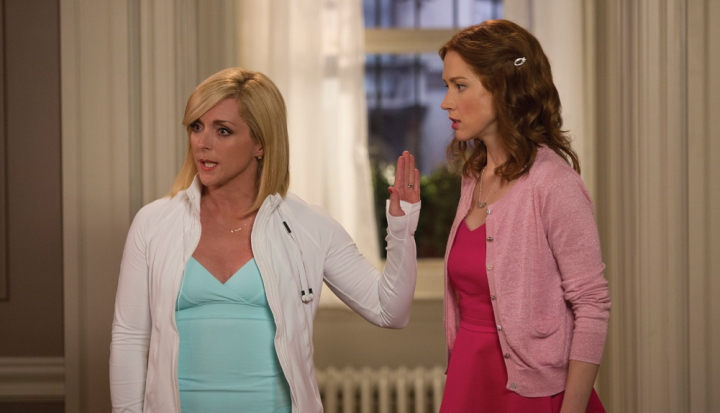 When it first became available in early 2013, the Netflix original series House of Cards lost me at the prologue. The show, with its ultra-cynical take on Washington and American government, has completed three seasons with Kevin Spacey starring as plotting and ascendant politician Francis Underwood.
The show’s creator Beau Willimon told NPR’s Fresh Air that the grim opening scene that lost me as a viewer—in which Underwood breaks a suffering dog’s neck—was actually intended to do just that. By immediately setting the stage for Underwood’s brutality-as-necessity, he offered a crystal clear warning: Proceed at your own risk. So I opted out. I’m neither entertained nor challenged by an absence of redemption in such narratives.
Fortunately, Netflix released another original series that’s decidedly more optimistic about the human condition. Unbreakable Kimmy Schmidt, starring the endearing Ellie Kemper, is that 20 minutes of sunshine during a cold, overcast week, from its costuming and set design to its theme song and opening credits.
Faith in humanity is rare on TV, even in comedies. Cynicism and sarcasm rule the day. From AMC’s Mad Men to HBO’s Game of Thrones, viewers have come to expect the worst in TV characters. One of my favorite comedies, HBO’s Veep, relies on outrageously inept characters, as does Fox’s recently cancelled The Mindy Project (now on Hulu), which stars Mindy Kaling as a vapid and self-centered OB/GYN. Kimmy Schmidt offers something different: the idea that people, despite our failings, are amazing.
Here’s how Kimmy’s story starts: Four women in long, matronly dresses gather around a tree in a dimly lit room. To the tune of “O, Christmas Tree,” they sing, “Apocalypse, apocalypse, we caused it by our dumbness.”
Suddenly federal agents burst into what we learn is an underground bunker where the “Mole Women” (as they’re later dubbed) have been held captive for 15 years. Their captor is doomsday cult leader the Rev. Richard Wayne Gary Wayne, leader of Savior Rick’s Spooky Church of the Scary-pocalypse, a characteristically ridiculous name concocted by the show’s writer and cocreator Tina Fey, well known for her zany yet cutting humor.
The raid literally lets light into the darkness and beams of sunlight greet Kimmy as she emerges from captivity, back into the world she’d been led to believe was scorched and burned thanks to human folly. (That image is replayed at the beginning of each episode while the theme song plays, “They’re alive, dammit. It’s a miracle.”)
“But it’s here. It’s all still here,” Kimmy exclaims, as if regaining her sight after years of blindness. And indeed she is. At 29 years old, she’s experiencing a world she hasn’t seen since she was 14.
In those first five minutes of Unbreakable Kimmy Schmidt we are treated to a counterpoint to the pessimism found in popular post-apocalyptic narratives. Instead of bombed out and burned familiar landmarks, re-imagined in a dark and devastated future, we are treated to images of green grass, a blue sky, leaves on trees rustling in a gentle breeze: It’s the world exactly as we know it—incredibly normal.
In Kimmy Schmidt’s post-apocalypse, our modern world is a brilliant and beautiful gift. “We’re running! Outside!” Kimmy shouts while jogging alongside an unassuming New Yorker getting in what was an otherwise mundane workout in Central Park. She laughs hysterically at automated faucets and hand dryers in a public bathroom. A simple hand motion and there is running water and blowing air, not only luxuries to a person stuck inside a bunker for a decade and a half, but signs of life itself.
But it’s not all roses and butterflies, or cheerful pink cardigans and light-up Sketchers (the youthful shoes and bright clothing that become Kimmy’s signature post-bunker look). Kimmy’s employer, Jacqueline Voorhees, is a Manhattan housewife who sincerely thinks she must be beautiful on the outside in order to feel happy on the inside, and goes through great pains (quite literally) to achieve it. Kimmy’s roommate, Titus Andromedon, is a supremely talented actor who moved to New York City from a small Mississippi town in pursuit of big dreams in the theater. Instead, he performs for pocket change in Times Square in a knock-off Iron Man costume. Xanthippe Voorhees, Jacqueline’s stepdaughter, is an unhappy teenager who tries to impress her friends by pretending at promiscuity, drinking, and drug use. And there’s Dong Nguyen, who Kimmy befriends in a GED prep class. He is in love with an oblivious Kimmy, who ultimately just wants to be friends.
The characters are nutty, the dialogue outrageous and sharp. In the hands of less competent writers, Jacqueline might be just another wealthy socialite and Xanthippe another over-privileged rich kid at whom to roll our eyes. Titus and Dong would actually prop up the stereotypes they’re meant to dismantle. And Kimmy would be another Gidget or Pollyanna who, while entertaining, are little more than caricatures of women who believe in the power of positive thinking.
Though saturated with humor, Unbreakable Kimmy Schmidt has a message. “We’re not garbage. We’re human beings,” Kimmy tells Today Show’s Matt Lauer (playing himself) in an interview following her release from captivity. She stares right into the camera. It’s this conviction that drives Kimmy for the entire season, to help old friends, new friends, and, of course, herself. But it’s not about necessity and the need to survive in a cynical world. She left that life behind in the Rev. Wayne’s bunker. It’s because she believes people are worth it.
This column appeared in the July 2015 issue of U.S. Catholic (Vol. 80, No. 7, pages 40–41).
Image: ©Netflix/Eric Liebowitz
TagsCulture in Context TV and film