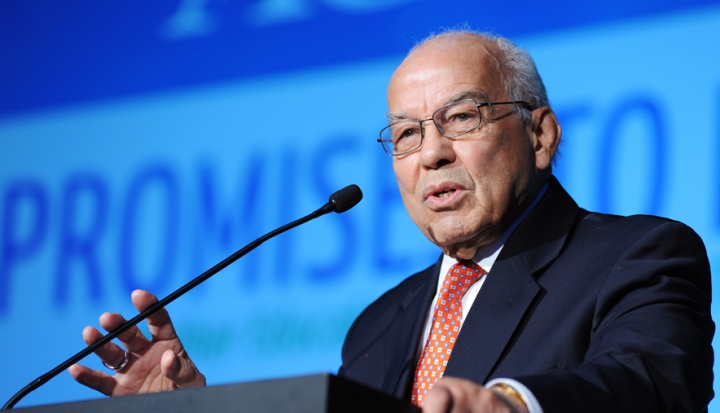 On April 4, 1968—the day Martin Luther King Jr. was assassinated—Norman Francis was in Philadelphia meeting with leaders of the Sisters of the Blessed Sacrament. Francis, who had worked for 10 years in administrative positions for the sisters at Xavier University of Louisiana, had previously turned down two offers to become the university’s first black lay president. But on this historic day, he changed his mind.
“It was, in part, coincidental,” says Francis of his accepting the presidency on the day of King’s death. But events that day triggered a personal epiphany, he says. It cemented in his mind the connection between equal rights and education—and just how he fit into the equation. “Education is the road out of poverty, without question,” Francis says.
That was certainly true for Francis, whose parents never finished high school and who began his career shining shoes at the corner of Main and Jefferson in Lafayette, Louisiana. In 1952 he graduated from Xavier, the only historically black Catholic university in the United States. Three years later Francis became the first black man to earn a law degree from Loyola University Law School in New Orleans after working with Jesuit faculty to pressure the school into allowing African Americans to enroll. But Xavier proved to be his true calling.
“I guess I could have been a millionaire lawyer,” Francis says. “But the sisters saw something in me and took care of what I was supposed to do.”
Nearly half a century later, Francis’ name is virtually synonymous with Xavier. He has gained a national reputation and served as an advisor to eight U.S. presidents on education and civil rights issues. And now the longest-tenured college president in the United States—after 47 years of service—is retiring. When asked why he’s stepping down now, Francis responds with his trademark wit: “I could have left after 20 years, but who wants to hire a 58-year-old former college president?”
St. Katharine Drexel founded Xavier as a four-year college in 1925 to change racial attitudes and shatter minorities’ cycle of poverty. For Francis, that vision stood in stark contrast to the institutional church he’d experienced growing up, when he and his family were required to sit in the back of the cathedral in Lafayette. “The people in the high church were not prepared to take the grief,” he says. “I was marginalized legally by the Supreme Court, but I learned from my parents to look past what was taught in the church—to God.”
In the 1960s, individual priests and nuns “carried the flag” for the cause, marching for desegregation and voting rights. Among them was Francis’ brother, Joseph—the auxiliary bishop of Newark, New Jersey at the time—who took part in the second civil rights march in Selma, Alabama.
Francis himself was a leader in the National Student Association and counsel with the law firm representing the Congress for Racial Equality (CORE). As Xavier’s dean of men in 1961, he housed the Freedom Riders after their bus was bombed in Alabama. “These were groups not thought well of by those who thought you should keep your mouth shut,” Francis says.
Early experiences like these strengthened Francis’ commitment to education as a path to equality. He’s served as president of the American Association of Higher Education and the United Negro College Fund. He’s also rubbed elbows with powerful world leaders. In 2006, President George W. Bush presented him with the nation’s highest civil award, the Presidential Medal of Freedom. And Francis dined with Barack Obama back when Obama was just a U.S. senator.
Under Francis’ leadership, Xavier became a world-class university with a campus that has grown from the size of a city block to more than 60 acres. The enrollment has nearly tripled. Xavier today ranks first in the nation for the number of black students who complete medical school and third for the number who earn pharmacy degrees.
Francis takes great pride in Xavier, where he’s been a fixture since he arrived on campus as a freshman in 1948. He has also led the university through some of its most challenging times, surviving everything from racism to the ravages of Katrina.
Yet Francis doesn’t like to take credit. “I tried to hire people smarter than me and got out of their way,” he says. “It was like playing poker with four aces and a wild deuce!”
The jovial Francis turns serious when talking about racism, an issue that has persisted throughout his presidency. Despite all that has been gained since that fateful day in 1968, Francis says, the march toward racial equality in America will still go on even after his retirement.
“Race, color, and gender still matter in this country. That’s not a racist statement, just a matter of fact,” he says. “At 84, I can see that we have not closed the gaps for most Americans, especially for blacks. We haven’t moved as fast as I thought we would have. We have not lived up to our responsibilities as a people in a democratic nation.”
But he has faith in the future and hope that new leaders will carry on his legacy. “Some people still think everyone can just pull themselves up by their own bootstraps,” Francis says. “But from the president to the pope, there’s a new focus on disparity. We’ve got a new generation of young people more open to change. And some people are starting to see it: Hell, we don’t have bootstraps.”
This column appeared in the June 2015 issue of U.S. Catholic (Vol. 80, No. 6, page 47-48).