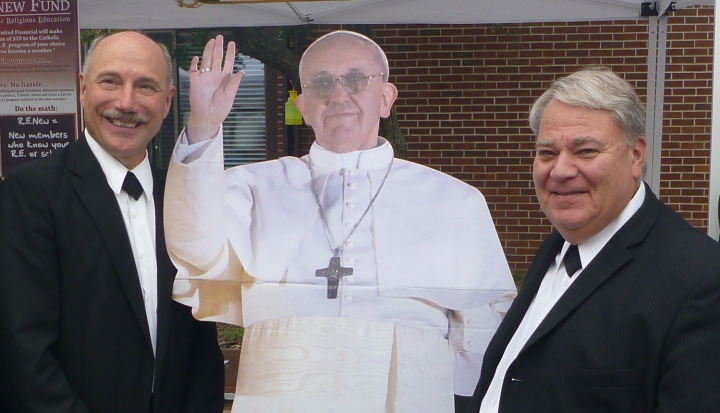 Have you met Flat Francis? In an effort to drum up excitement about Pope Francis’ visit to the United States in the fall of 2015, the Catholic Extension Society launched a media campaign encouraging people to take photos of themselves with “Flat Francis” and post them on social media. There’s only one problem with Flat Francis. He’s FLAT! He’s one dimensional. And while that works nicely for social media, in reality, it’s not good to be one dimensional. Rather, we need to be well-rounded.

This is especially true for us catechists. In fact, the General Directory for Catechesis (234 & 238) tells us explicitly that our formation must be an absolute priority and that such formation needs to focus on three dimensions: being, knowing, and doing (although they used the phrase savoir faire, which basically means the ability to be graceful in social situations.) These three dimensions give us depth—not the illusion of it, as in a 3-D movie theater, but real depth.

The first dimension of our formation is being, which simply means that we need to be healthy spiritually. The bottom line is, you can’t give what you don’t have and we are called to share our relationship to Jesus with others. When we think of deepening this relationship, we think, perhaps, of going on retreat. Unfortunately, not all of us have the privilege or the time to do so. However, we still need to take pauses to pay attention to our relationship with the Lord. There are many opportunities available today for busy people to stop and take a breath. I encourage you to look at the 3 Minute Retreat, available from Loyola Press, as well as another site called Other 6; both give you an opportunity to take a pause in your day and to be grounded in God. Likewise, the Irish Jesuits have a wonderful site called Sacred Space that enables you to reflectively pray online. Finally, I recommend a book that I recently co-authored with Julianne Stanz (Director of the Office for the New Evangelization, Diocese of Green Bay) titled The Catechist’s Backpack: Spiritual Essentials for the Journey as a way to pause, reflect, and grow in your spiritual journey as a catechist.

The second dimension of our formation is all about knowing. Our faith is not simply a feeling: It has content. In our ongoing formation, we need to commit ourselves to deepening our knowledge of the Catholic faith and to find words to express that faith in a way that speaks to people’s lives. Let’s face it: It sometimes feels as though we need to have a graduate degree in order to understand some Catholic theology. What’s an average catechist to do? I highly recommend that you deepen your knowledge of the faith by taking advantage of some of the books I’ve written, beginning with A Well Built Faith, which basically expounds on the four pillars of the Catechism in very simple terms. Likewise, my books Practice Makes Catholic and The Bible Blueprint can help to deepen your knowledge of Catholic practices and the Catholic approach to Scripture, respectively. Then, having whet your appetite for more, I encourage you to move on to the United States Catholic Catechism for Adults, from our U.S. bishops, and of course the universal Catechism of the Catholic Church. Remember, we are never done growing in knowledge of our faith. It is not a goal to accomplish, it’s a way of life.

Finally, we turn our attention now to the final dimension, which the Church refers to as savoir faire, or doing things with a flair. For a catechist to have savoir faire is to be able to transmit the message of the Gospel with style so that our catechesis is engaging and transformative. We do not have to become entertainers or master educators. However, we do need to be skilled at effectively transmitting ideas and engaging those we teach in a manner that truly touches their hearts and minds and calls them into relationship with Christ. In my books, The Catechist’s Toolbox and Beyond the Catechist’s Toolbox, I focus on a number of skills needed to become a more effective catechist. Likewise, I have a number of free recorded webinars archived on my blog, Catechist’s Journey—webinars that will help you to develop the skills you need to deliver the word of God with savoir faire!

The last thing we want to be as a catechist is flat! By paying attention to these three areas of our formation, we can truly become three dimensional catechists.

This is a web-only article that accompanies the print feature “Teaching it forward: Religious education reimagined” which appeared in the June 2015 issue of U.S. Catholic (Vol. 80, No. 6, pages 12–17).

Joe Paprocki is the National Consultant for Faith Formation for Loyola Press. He is a catechist and blogs about the experience at www.catechistsjourney.com. His latest book, Under the Influence of Jesus: The Transforming Experience of Encountering Christ, is available from Loyola Press.