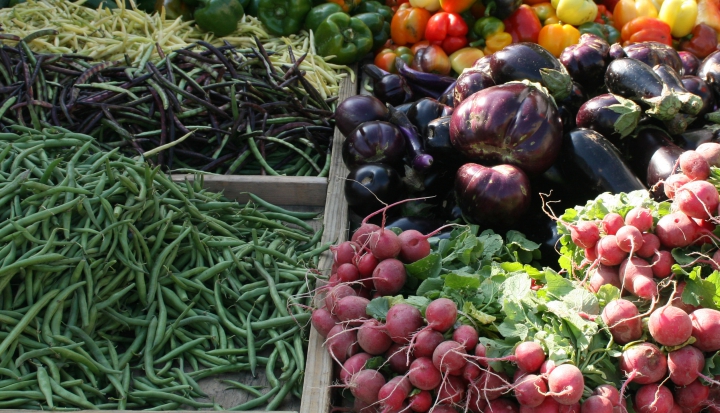 Purchasing your food should be a decision that's about something besides convienence and price. Where and how you purchase your food can have widespread consequences. The choices we make in our eating habits—what we consume, where we buy it, how it is grown—can have a great environmental impact that extends far beyond our local community.

For Catholics, these choices are also matters of faith, argues moral theologian David Cloutier. In his book Walking God’s Earth: The Environment and Catholic Faith (Liturgical Press), Cloutier discusses the link between the gospel message and the green revolution, offering suggestions for Catholics on making small lifestyle changes that can drastically alter their carbon footprint.

In this web-exclusive excerpt of his interview with U.S. Catholic, Cloutier talks about the impact of our eating choices and changes we can make to adopt a more eco-friendly diet.

What do our eating choices have to do with caring for the environment?

I think focusing on food is important because it's such a fundamental pattern in every person's life. Three times a day or more, we prepare food for ourselves or find food for ourselves in some way. If we are able to change that pattern and think differently about what we're looking for when we try to find something to eat, that itself can make a lot of difference in some of the larger environmental problems.

I'm the president of the board of directors of a food cooperative in my city. We work closely with more than 100 local producers to provide sustainably grown food that is from the local area or that is seasonal.

I work with farmers who are committed to taking care of the land that they're farming on. Often, these are small farmers. There are a lot of Amish farmers in our community who are interested in passing on their farm from generation to generation. That's clearly the best way to insure that people farm sustainably, because if they don't, they will have nothing to give to their children.

What should people consider when choosing to buy their food?

Finding outlets to provide sustainably grown foods—farmers' markets, food cooperatives, and also larger businesses which are interested in providing these things—is important. I don't think that the ideal is to spend all of your time cultivating a little personal garden in your backyard, getting some chickens, and growing your own crops. That's fine if you want to do that—it is probably a better hobby environmentally than a lot of others. In fact, working on that sort of scale can be good for the environment.

But it is not necessary for people to grow their own food. What people should be doing is supporting farmers and food producers who are committed to these environmental ideals.

Can you give an example of how food production impacts the environment?

One concrete example of an important environmental issue related to food is the nitrogen cycle. People almost never think about this. I don't know that I've ever seen a big headline story or a big United Nations world conference on the nitrogen cycle.

Nitrogen is the fundamental nutrient that is necessary to grow crops. For a long time people worried that the world would become overpopulated because there was a limited amount of nitrogen in the soil, and if you used up the nitrogen by farming the soil too intensively, you lost the farmland; it became barren.

Early in the 20th century, German scientists were able to crack the chemical bond of nitrogen in the air—which is a very strong bond, so it took a lot of energy to do that—and put the nitrogen from the air in bags. We call that fertilizer, because it makes the soil fertile by adding nitrogen to it. In principle there is nothing wrong with doing that on a small scale.

Of course, the advantages of just throwing a bunch of nitrogen on the soil were very high for farmers. It produced increased yields. That meant they didn't have to worry about managing crop rotations or letting their fields lie fallow, like it says in the Bible. Increasingly, all of our plant crops were grown with nitrogen fertilizers.

Why is this a problem?

There's a dead zone at the mouth of the Mississippi River, that all of our fine Illinois grain farms contribute to, that is the size of New Jersey. This ultimately means that the oceans can't sustain marine life, and so we run into difficulties with various fish species not being able to reproduce or find the microorganisms that they rely on. Eventually, fisheries declined and then collapsed.

Do we think about the fisheries? No, we don't. We think, "Oh well, if there's not fish in the store or if it's really expensive, I'll just buy some chicken." But especially in small islands nations, fisheries are absolutely essential to life. People would not be able to live in Japan without fish. There's not enough land to do the kind of things that we're able to do in the United States.

All of this can quickly become a huge overwhelming problem—dead zones in faraway rivers, and island nations on the other side of the planet—but ultimately those problems come back to the overuse of fertilizer.

So what is the alternative?

If we commit ourselves to growing crops organically, one of the primary criteria for organic certification is not using nitrogen chemical fertilizers. We are perfectly able to grow crops without those fertilizers, but it often involves methods that are somewhat more expensive, require more human labor, and require us to rest the land, as the Bible commands.

That means we'll have to pay a little more for our food or buy a little less food. I suggest people might want to make that choice.

A second problem is that we grow so much corn, but not because we eat that much. Do you know where all the corn is going?

Yes, all of the corn is going into livestock, and the return that we get on that in terms of nutrition is significantly less that if we were eating the grain itself. The return in terms of calories and nutrition is a lot less, which makes sense because part of what the corn is doing is allowing the cow to live in a certain way, and that uses up some of the calories before we slaughter the cow.

Many people are concerned about eating meat because of cruelty to animals. That’s an important concern because of the way in which animals are treated in our system. But there’s also an environmental impact to the overconsumption of animals.

It's one of the reasons that we have to have these very, very large monoculture farms where we grow a lot of corn in order to provide for a livestock. And we have so many cows. In fact, it turns out cows are as bad as cars when it comes to pollution.

If somebody wants to drive a more fuel-efficient car to help the environment, another thing they could do would be to eat less beef. Cows are methane machines, and methane is an even more potent global warming gas than the carbon dioxide that comes out of burning petroleum.

Are you a vegetarian?

I am not trying to suggest that fertilizers themselves are evil or eating meat is evil. Rather, it suggests that we use too much fertilizer and we eat too much meat. This is the pattern that we've gotten ourselves into. It would be good for us in many ways, but particularly environmentally, if we were to change that pattern.

This is a web-only interview that accompanies the print interview with David Cloutier titled “Choose life: The environmental edition,” which appeared in the June 2015 issue of U.S. Catholic (Vol. 80, No. 6, pages 24-28).