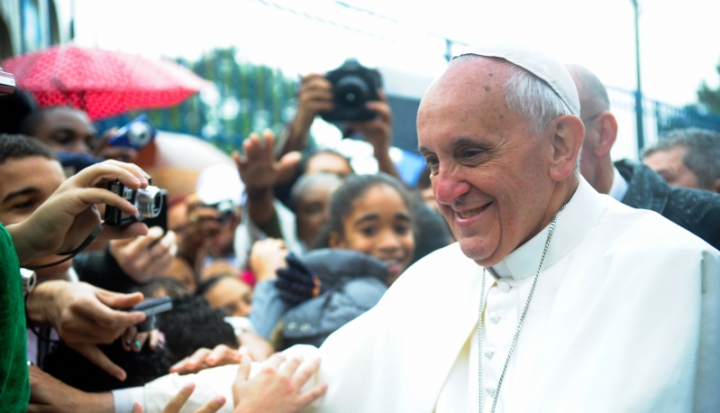 On June 18, Pope Francis will publish the Church's first enyclical on ecology. While for many this is an exciting and unprecedented move, others have already started criticizing the pope. Among the strongest critics are people who argue that Catholics do not have to take this document seriously—that some of its teachings may not be made with the charism of infallibility and could therefore be ignored.

Pope Francis’ office and popularity means that his encyclical will probably raise human-caused climate change to a level of global consciousness that has never before been seen. However, when preparing to read and understand this upcoming document, it is important to also keep in mind levels of papal teaching. Only when Francis’ upcoming encyclical is correctly placed within this framework can it truly be understood and taken seriously. The following essay attempts to till the Catholic land ahead of the pope’s encyclical, in order that the document might grow to its full potential and help produce the fruit of a stable, habitable climate in which justice and peace can flourish.

Before looking at how Pope Francis’s encyclical fits in the Church’s levels of teaching authority, let’s first review how the Catholic Church understands climate change. In 1981, the U.S. bishops published a statement titled Reflections on the Energy Crisis. This document explicitly recognized the reality and severity of anthropogenic (human-caused) climate change, and called for people of faith to address this challenge as a moral issue. The bishops recognized the widespread scientific consensus regarding climate change. (NASA points out that 97% of active climate scientists agree that the current climate change is “very likely” the result of human actions.)

In addition, the Church’s is aware that the adverse consequences of climate change—including food and water stresses, rising sea levels, more frequent severe weather events, and widespread human fatalities—undermine core commitments of Catholic social teaching. In other words, there is a connection between what happens to our environment and what happens to the poor and vulnerable around the world. The Church is dedicated to protecting human life and dignity, exercising a preferential option for the poor, caring for Creation, and promoting the common good in solidarity with all persons. Since 1981, this teaching of the Church has been affirmed by, among others: Saint John Paul II, Pope Emeritus Benedict XVI, Pope Francis, the Pontifical Academy of Sciences, U.S. Conference of Catholic Bishops (USCCB), German Bishops’ Conference, Irish Catholic Bishops’ Conference, and dozens of individual bishops around the world. As the USCCB declared in its pastoral letter Global Climate Change: A Plea for Dialogue, Prudence and the Common Good:

In facing climate change, what we already know requires a response; it cannot be easily dismissed. Significant levels of scientific consensus—even in a situation with less than full certainty, where the consequences of not acting are serious—justifies, indeed can obligate, our taking action intended to avert potential dangers. In other words, if enough evidence indicates that the present course of action could jeopardize humankind's well-being, prudence dictates taking mitigating or preventative action.

Church Teaching Authority and the Response of the Faithful

The Second Vatican Council’s Dogmatic Constitution on the Church, Lumen Gentium, reminds us that Jesus formed the apostles into a college with authority over the whole Church and placed Peter at its head (nos. 19-22). Additionally, the Church asserts that, as Peter’s successor, the pope has a distinct vocation as “supreme teacher of the universal Church” (Lumen Gentium 25). The Second Vatican Council’s Pastoral Constitution on the Church in the Modern World, Gaudium et Spes, repeatedly emphasizes that part of the Church’s fundamental vocation is to share its teachings with the world in order to help shape public discourse and policy in ways that protect the common good and promote the flourishing of all persons—especially the poorest and most vulnerable (see especially Chapter IV: “The Role of the Church in the Modern World”).

In several of his works, theologian Richard R. Gaillardetz summarizes the four categories of teaching authority and corresponding levels of assent that have been outlined in post-conciliar Catholic ecclesiology. Drawing especially on Lumen Gentium, Ad Tuendam Fidem, the Congregation for the Doctrine of the Faith and commentary by Cardinal Joseph Ratzinger, Gaillardetz describes the following descending levels of ecclesial authority and assent:

Given his office as head of the college of bishops, the pope is able to exercise all four levels of ecclesial teaching authority. To this end, popes typically use encyclical letters to reiterate dogma, address doctrine, and offer judgments. As such, the solemnity of an encyclical is surpassed only by apostolic constitutions (papal bulls), which popes typically use to define dogma.

Presuming that Pope Francis addresses human climate change in his forthcoming encyclical, he will likely do so with an unprecedented level of papal authority. Saint John Paul II repeatedly addressed climate change as a moral issue, but never did so in a papal encyclical (1990 and 1999 World Day of Peace Messages). Pope Emeritus Benedict XVI spoke about climate change in his 2009 encyclical Caritas in Veritate (no. 50), but this reference was part of a much larger reflection on integral human development.

Pope Francis, on the other hand, has already confirmed that the encyclical will center on ecology. Given that this is the case, and that Francis has already showed an emphasis on anthropogenic climate change, it is likely that he will go further to addressing this issue than Benedict ever did.

Given the Church’s framework of ecclesial authority and assent, any teachings specifically about climate change that Pope Francis makes in his encyclical will likely constitute a prudential judgment (the fourth level of Church teaching) that is made while keeping in mind Catholic dogma and doctrine. If this is the case, Catholics will be called to receive this teaching with thoughtful consideration marked by sincere openness, humble deliberation and deep prayer. Only after reading the encyclical with this disposition could Catholics morally dispute any such teachings about climate change.

Some people have raised questions about whether the pope can speak with ecclesial authority about climate change and the extent to which the faithful would have to adhere to any such teachings. In particular, some of these voices have attempted to minimize the authority proper to prudential papal teaching and are under the impression that Catholics would be free to quickly dismiss any such teachings in good conscience. In light of Church teaching about ecclesial authority, however, this opinion clearly fails to satisfy the Church’s criteria for faithful reception of papal teaching. As such, these people are at odds with Church teaching about ecclesial authority and assent, and their opinions should not be listened to.

Pope Francis has already built on the precedent of Saint John Paul II and Pope Emeritus Benedict XVI. He has used less authoritative venues to exercise the ordinary papal magisterium and affirm a “definitive and ineluctable ethical impetrative to act” on anthropogenic climate change. All these previous actions suggest that his upcoming encyclical on ecology will continue to recognize climate change as a moral issue. When done in this forum, he will be speaking with a groundbreaking level of papal authority on the subject, calling people of faith and goodwill to address this challenge.

This encyclical will have the ability to inspire faith-based environmental action and make a positive change in the world. However, this will only happen if Catholics recognize the authority of the document and receive its teaching accordingly. Some commentators have already mischaracterized the authority with which various papal teachings are imbued, arguing that Catholics are not responsible for receiving these messages thoughtfully and carefully.

If Pope Francis does use the upcoming encyclical to address human climate change, I hope that Catholics will be inspired to receive it appropriately, taking into account their responsibilities when it comes to Church authority and assent. Only then can this encyclical reach its potential to inspire a unified, faith-filled response to one of the world’s most urgent and pressing problems.

Note: This article builds on “Church Authority and Assent: Clarifications Ahead of Pope Francis’s Encyclical” at Political Theology Today and “Preparing for the Storm: Anticipating and Countering the Likely Attacks on Pope Francis and His Environmental Encyclical” at Millennial Journal. I am grateful to Richard Gaillardetz, Ph.D., the Joseph Professor of Catholic Systematic Theology at Boston College, and Daniel J. Misleh, M.A., Executive Director of the Catholic Climate Covenant, for valuable feedback on earlier drafts of this essay.

Daniel R. DiLeo is a Ph.D. student in theological ethics at Boston College and project manager of the Catholic Climate Covenant.