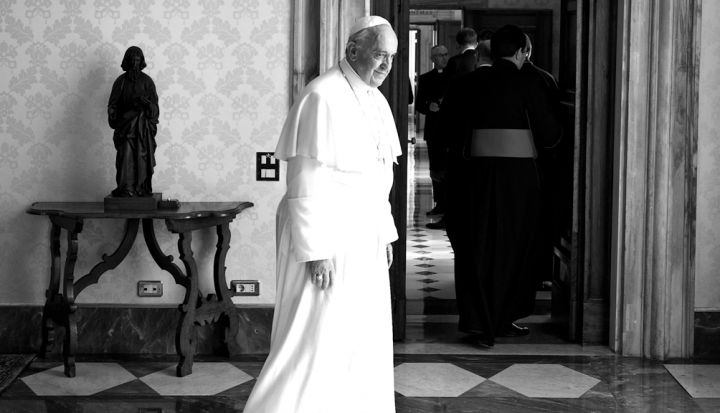 U.S. Catholic subscribers are big fans of Pope Francis, but some Catholics not so much.

As Pope Francis finishes up his second year leading 1.2 billion Catholics, a brief tour of his mainstream media portrayal doesn’t exactly indicate any impending drop in popularity. Francis—the Kia Soul-riding, cafeteria-eating, shower-installing super pope who regularly loses his hat on windy days—simply must be everyone’s favorite. Because, really. How could you not like this guy?

A recent U.S. Catholic reader survey indicates, however, that differing opinions on the papacy are, when present, extreme. When asked to grade Pope Francis, most respondents either gave him an “A” or an “F,” with few marks in between.

Among those surveyed, 55 percent have a favorable view of Francis and 9 percent have a mostly favorable view, while 14 and 22 percent describe their views as mostly unfavorable or unfavorable, respectively. It’s worth noting, however, that results from our more broadly conducted survey of 1,535 uscatholic.org visitors include opinions of those who are not U.S. Catholic subscribers. When considered on their own, U.S. Catholic subscribers weigh heavily in favor of Pope Francis, with nearly all expressing favorable (91 percent) or mostly favorable (5 percent) views of the pontiff.

The high ratings are certainly understandable, as papal media coverage has been extensive, even if sometimes missing the mark. While he’s often lauded for frequent almsgiving, Francis is occasionally misinterpreted and, in some cases, misattributed. For instance, late last year much of the public applauded Francis for saying something along the lines of “all dogs go to heaven,” which the Vatican confirmed never actually happened. But that didn’t stop the New York Times, among other major media outlets, from initially reporting on it.

Even so, the largely positive media coverage of Pope Francis was a big help in reforming the church’s image, say 49 percent of those surveyed. Eighty-four percent of U.S. Catholic subscribers share this sentiment. And 86 percent of surveyed subscribers (and 69 percent of all those surveyed) say they have paid closer attention to Catholic news since Pope Francis was elected. Nancy King of West Chicago, Illinois says the positive media attention “has been helpful, but it has also been frequently misrepresented, so ironically both things are true.”

It seems the media’s portrayal of Francis has contributed to a growing unease among conservative Catholics. Among those surveyed, many say they aren’t sold on the Argentine pontiff. And those who hold negative views don’t hold back, as many share hopes that his papacy is a short one. “I wish he’d just convert to Catholicism!” says one commenter who is apparently more Catholic than the pope.

But what continues to captivate the majority of Catholics—as well as the mainstream media—is Francis’ pragmatic style of leadership. Ninety-six percent of subscribers say they have been inspired by Pope Francis’ humble and simple lifestyle. And when asked what they admire Pope Francis for most, more than 200 respondents mention his humility.

“Pope Francis is challenging me to live a humble and joyous life, to understand the teaching of the gospel but more importantly to live it,” says Robert Klick of St. Louis.

Klick is not alone in saying that Francis inspires strong faith, as 59 percent of all surveyed say they are more interested in Catholicism since Pope Francis was elected. And 31 percent say they have attended Mass more often since Francis’ election.

“Pope Francis’ remarks on love, mercy, and becoming less judgmental are refreshing,” says Sister of Mercy Ellen Turner of Portland, Maine. “I think his reminding us that we all need to be more prayerful and more in touch with the poor and needy are huge reminders of Jesus’ message. Looking closely at the gospels, I think Jesus was just trying to teach us how to get along. In 2,000 years we haven’t learned that lesson.”

Anne Amico of Commack, New York hopes the church continues to follow Francis’ vision. “I’m scared that we will revert to the grandeur, pomp, and circumstance after Pope Francis,” she says. “I’m afraid that not everyone feels the same way.”

Amico might, then, be reassured that many others surveyed also express concern that Francis actually isn’t moving fast enough. Andrew Russell of Appleton, Wisconsin says he hopes “Pope Francis will live long enough to carry out the reforms that he has started, and that his successor will continue them.” Hundreds of commenters say they regularly worry about Pope Francis’ health and age—he turned 78 in December 2014—and that they, like Amico and Russell, want reassurance that he will be succeeded by a pope who shares a similar style of leadership and vision.

But even those who hold favorable views of Francis’ papacy express concern with the amount of attention Francis devotes to women in the church. While Francis has repeatedly referenced the “feminine genius” and called for a “deeper theology of women” in the church, he, however well intentioned, has also made some arguably cringe-worthy comments about women (e.g. that women theologians are “strawberries on the cake”). Father Jim Schexnayder of Oakland, California says, “More action is needed to include women in leadership in the Vatican and in ministry such as the permanent diaconate.”

Still, most of those surveyed seem to think Francis means business when it comes to reform. Seventy-seven percent of those surveyed say Pope Francis represents a major change in the direction of the church. Another 77 percent also say they believe Francis will make major reforms in the Vatican during his papacy.

While Francis is a glimpse of hope for some, he is an unwelcome sign of change for others. In the last year, and especially following the Synod on the Family, cardinals and bishops found themselves working to calm nerves of conservative Catholics shaken by the conversation at the late 2014 synod. Francis encouraged open debate at the meeting of bishops, which worried many conservatives who argued that open dialogue could undermine church teachings.

“The remarks he makes about conservative Catholics and especially traditionalists are harsh if not mean-spirited,” says Rachel Gohlman of Lake Wales, Florida. “As the head of the church, he should be in love with our traditions, not deriding them.”

Francis’ often quoted “Who am I to judge?” comment in regard to homosexuality has certainly drawn criticism from conservative Catholics over the last two years. (The full quote: “A gay person who is seeking God, who is of good will—well, who am I to judge him?”) “Instead of bringing people closer to Christ, some of his comments have simply been used to justify sinful behavior,” says Christopher Rodgers of Steubenville, Ohio. Among all those surveyed, however, fewer than half say they found his comments about homosexuality and same-sex relationships troubling.

“Who am I to judge?” is also a comment to which many Catholics cling. The comment was favorably referenced more than 200 times in these survey results. And among subscribers surveyed, only 8 percent say they were troubled by Pope Francis’ comments. Marty Murthum of Attica, Michigan says one of the best surprises from Francis’ papacy is that he “gives gay individuals their long deserved dignity.”

As even just these two divergent comments indicate, divisions still exist among Catholics. Thirty-eight percent of all surveyed think Francis has already caused too much division in the church. And such concern is more prevalent among those who disapprove of Francis’ papacy.

“Because of the lack of leadership coming from the Holy Father, the church is fracturing now more than ever,” says Laramie Hirsch of Tulsa, Oklahoma.

But Francis might not be as concerned, as evidenced by his comments in an interview last year. “Fraternal and open discussion help develop theological and pastoral thinking,” he said. “I’m not afraid of this. On the contrary, I seek it.”

1. My view of Pope Francis is:

2. Since Pope Francis was elected, I am more interested in the Catholic faith.

3. I have been inspired by Pope Francis’ humble and simple lifestyle.

4. Since Pope Francis was elected, I have attended Mass more often.

5. Laypeople are getting more of a role and voice in the church under Pope Francis.

6. The comments Pope Francis has made on controversial topics often distort church teaching.

7. I have found myself paying closer attention to Catholic news since Pope Francis was elected.

8. The widespread media coverage of Pope Francis has been:

9. I believe that Francis will make major reforms in the Vatican during his papacy.

10. Pope Francis represents a major change in the direction of the church.

11. By now, I expected that Pope Francis would have made more concrete changes in the church.

13. I think Pope Francis is causing too much division within the church.

Results are based on survey responses from 1,535 USCatholic.org visitors, including 268 print subscribers.

Sarah Butler Schueller is a senior editor at U.S. Catholic.