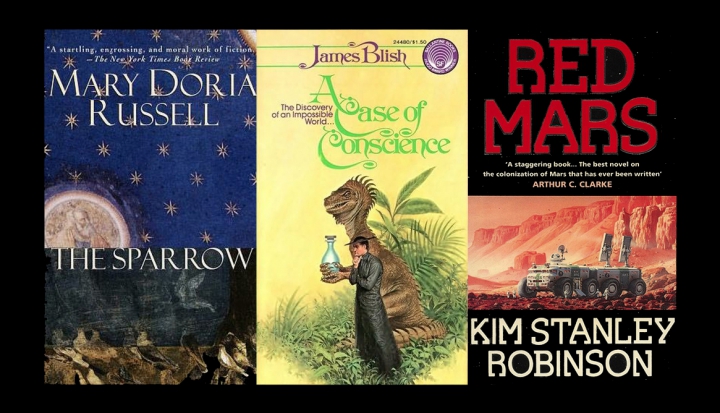 In some ways, sci-fi fans glory in the really awful. Most of us secretly want to try our hand at writing science fiction ourselves, and reading dreadful stuff that’s managed to get published gives us hope. The online sci-fi newsletter Ansible has a regular feature called “Thog’s Masterclass” featuring especially ludicrous examples of bad writing. (For example: “A swirling lava lamp of colors boiled on the screen like a hallucination that the cat had dragged in,” from Alexander Besher’s Rim, 1994.)

But what I want to mention here are widely praised books that I personally dislike. The reasons why I dislike them may be instructive. And in any event, their reputation will easily survive my criticism! 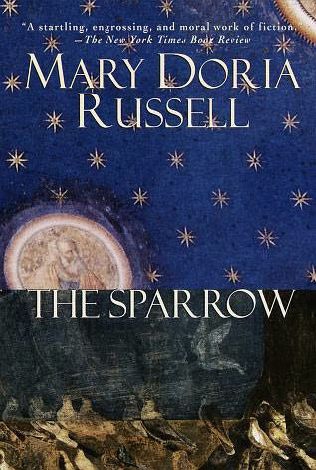 The Sparrow (Ballantine) by Mary Doria Russell: Everyone asks me about this novel of a Jesuit astronaut facing the philosophical challenge of an alien race that may or may not be “fallen.” Beyond the fact that the idea is old (see A Case of Conscience  by James Blish) and the theological speculations presented here are naïve, the real crime of this novel is that the Jesuit characters take themselves far too seriously. Our real reaction to soul-shattering events is, more often than not, to laugh at ourselves and our predicament. Usually with puns. Bad puns. 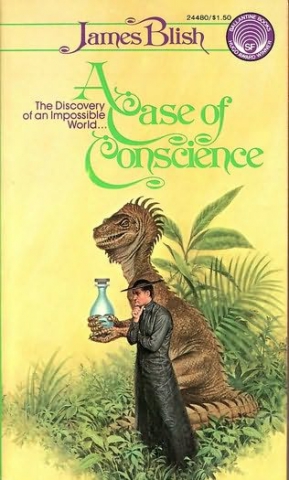 A Case of Conscience (Del Ray Impact) by James Blish: Speaking of which… Jo Walton sums up the problem with this book perfectly: “It’s like shooting fish in a barrel to point out all the things that are wrong with this book, from errors of theology and science to questions begging and jumping to conclusions. But it’s also very good.” Its goodness is that it’s a page-turner—if the things that are wrong with it don’t stop you from turning the pages. The trouble for me is that he gets both the theology wrong and the Jesuit spirituality exactly backwards. The author’s idea of what the church teaches about evolution had already been contradicted by Pope Pius XII in Humani Generis, some 10 years before the book came out. And the world-hating spirituality of the main character is not Jesuit but Jansenist: The Jansenists historically were the biggest opponents of the Jesuits. The book is popular because the author tells a good story, but these howlers stop me in my tracks. 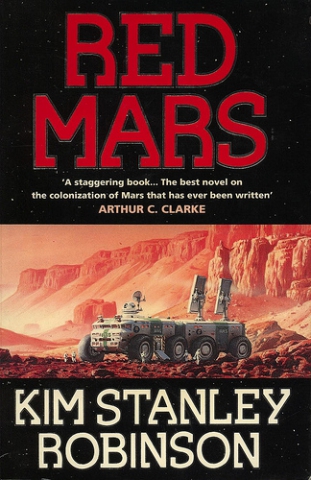 Red Mars (Spectra) by Kim Stanley Robinson: A modern classic, set on Mars, by a brilliant author who went to great lengths to get the setting right. What’s not to like? And yet, I disliked it. I only managed to finish it by skipping every third chapter, where the characters drone on incessantly about how they will set up their ideal society on Mars—something that Alexander Bogdanov first did in 1908, in a book called Red Star. Robinson’s religious characters are one-dimensional hypocrites; at least he could have made them three-dimensional hypocrites. And after he irritated me enough with these human howlers, I no longer was so tolerant of his science howlers—such as his gizmos for heating up the Martian atmosphere that violate conservation of energy: They run on solar energy; but Mars is cold precisely because the input of energy from the sun there is so weak.

The basic theme of all these criticisms? I can’t enjoy a book if it gets too many things wrong that the author should have been able to get right. I don’t mind if their speculated future turns out to be impossible—it’s astonishing how many writers in 1964 thought that 2014 would see colonies on the moon where all the engineers are men who still use slide rules! But when they get their philosophy or history or science wrong out of laziness, prejudice, or ignorance, then I don’t trust anything else the author might want to tell me. In science fiction, I am willing to suspend my disbelief of one or another scientific principle. But I can’t suspend my belief of how human beings actually behave.

TagsBooks and literature Science and technology

Brother Guy Consolmagno is an astronomer at the Vatican Observatory. He is the author of God's Mechanics: How Scientists and Engineers Make Sense of Religion (Jossey-Bass).