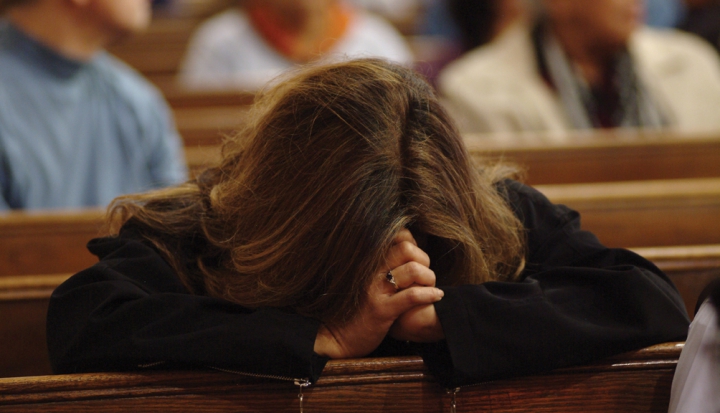 This Lent I decided to borrow from 12-step programs and do a “searching and fearless moral inventory.”

Every year I look forward to the solemnity of Lent with a feeling that’s somewhere between awe and dread. On the one hand, Lent is—as a friend of mine calls it—a palate cleanser for the spirit. It is all of the wonderful clichés and then some: a chance to start fresh, a movement from death into new life, a dedicated spiritual preparation for Easter and resurrection.

On the other hand, Lent is also the ultimate reminder—and not in a profound spiritual way—of all the little things I don’t do on a regular basis. When Lent approaches every year, I panic a little. I think of what I might give up: chocolate, caffeine, maybe swearing. But all of those tend to feel a little too self-helpy for my taste.

Some years I try to take up a practice: praying every morning, exercising more, some kind of devotional practice. Once again, these things feel so temporary. The lack of actual commitment feels like a new pair of shoes that doesn’t quite fit.

So this year as Lent approached, I found myself feeling restless. I had more or less decided not to give anything up, and I couldn’t think of anything that I could take on. But I decided to borrow a phrase from 12-step programs (Alcoholics Anonymous and the like) to attempt a “searching and fearless moral inventory,” and then see where I might stand. As I meditated on my moral inventory, a phrase rose to the surface: Mea culpa.

I started thinking about the events that have dominated our national consciousness this year: Ferguson, New York, Mike Brown, Eric Garner. I thought about the comfort I continue to feel and the armor of my white skin against the racial injustices of this world. I looked at my white son and knew that I will likely never have to talk to him about how to behave when the police pull him over because of the color of his skin. I think to myself, mea culpa.

I walk past an acquaintance of mine who is experiencing homelessness, and who has been for many years now. I know that last winter he nearly lost a toe because it was so cold and he had no place to go to get warm. I also know that he has been applying for jobs everywhere he can, but he has a criminal record and has served time in jail. Every time he gets to the background check, he gets turned away. It is winter, and he is once again on the streets. I give him a dollar or buy him a cup of tea, then move on to run my errands. I think to myself, mea culpa.

In the mornings I get dressed, putting on clothes made by overworked hands in conditions that I would not even consider working in. I remember the factories tumbling down in Bangladesh. I nevertheless put on my socks (made in India). Later in the day I spend some time looking for a new dress. I think to myself, mea culpa.

In my reflection this Lent, I do not mean to take the burden of the entire world onto my own shoulders, as if I could rid the world of all its ills. I understand that I am much too mortal for that particular feat. Instead, for me, this season of solemnity is about viewing my place in the world and working to understand my own culpability.

Maybe I did not cause racism, but I have benefited from it. I have not personally pushed anyone into poverty, but I engage in a system every day that perpetuates cycles of poverty and wealth in unjust ways. I know that I could vote with my dollars, and I still fail to do even that.

So this Lent is not so much about guilt as it is about accountability. This Lent is about understanding that I am not alone in this world. It is also about recognizing that the demand to love my neighbor does not stop just because I feel overwhelmed.

One of my favorite Jesus stories is the one about the temple and the money changers. Jesus was a man who upset the status quo precisely because it was unjust and it utterly failed to honor the one who created us. As we approach the day of the resurrection, may we all find the courage to turn our own tables. Mea culpa. Mea culpa. Mea maxima culpa.