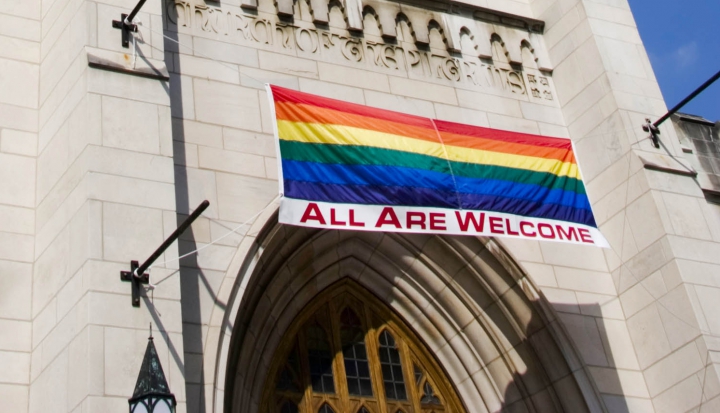 ROME (RNS) On its 15 previous pilgrimages, the Catholic gay rights group New Ways Ministry drew maybe two-dozen people to visit holy sites in places like Assisi and Rome. This year, the number of pilgrims unexpectedly doubled to 50. Chalk it up to the so-called Francis Effect, where the pope’s open-arms acceptance is giving new hope to gay and lesbian Catholics who have felt alienated from their church for decades.

What’s been even more surprising is that both New Ways and a similar Catholic LGBT organization in Britain are finding support from the Catholic hierarchy in their efforts to meet the pontiff when they both visit the Vatican on Ash Wednesday (February 18), the start of Lent, the period of penance and fasting preceding Easter.

For example, Archbishop Georg Ganswein, head of the papal household and the top aide to Pope Emeritus Benedict XVI, responded to New Ways’ request for a papal meet-and-greet by reserving tickets for the group at Francis’ weekly public audience in St. Peter’s Square. It’s not a private meeting—which is tough for anyone to get—but it’s not nothing.

The pope’s ambassador to Washington forwarded a similar request to Rome. Even San Francisco Archbishop Salvatore Cordileone—point man for the U.S. Conference of Catholic Bishops’ battle against gay marriage—had written a letter to the Vatican on their behalf.

Last December, Cordileone had a constructive meeting with Frank DeBernardo, executive director of New Ways, and Sister Jeannine Gramick, a co-founder of New Ways and a longtime advocate for LGBT inclusion in the church. But they were still surprised by the archbishop’s willingness to write a letter for them.

Moreover, British Cardinal Vincent Nichols of Westminster sent a warm blessing to a group of LGBT Catholics from London who are joining up with New Ways in Rome. “Be assured of my prayers for each and every one of you,” Nichols wrote. “Have a wonderful pilgrimage. God bless you all.”

“I feel that the positive reaction that we have been getting from the hierarchy is due to the welcoming spirit of Pope Francis, who wants to welcome everyone,” said Gramick, speaking by phone from Assisi, the pilgrims’ last stop before heading to Rome. “It’s very heartening to people who have felt alienated and rejected for so long, so we are feeling very hopeful.”

Gramick knows about rejection. In 1999, she was silenced by the Vatican for her “erroneous and dangerous” work with gay Catholics. She and the Catholic priest who co-founded New Ways Ministry in 1977 had “caused confusion among the Catholic people and have harmed the community of the church,” said the office headed by Cardinal Joseph Ratzinger, who would later be elected Benedict XVI.

The ministry’s work was called “doctrinally unacceptable.” A year later, Gramick was barred from even speaking of the 11-year probe of her work, an order she refused. As late as 2010, the U.S. Conference of Catholic Bishops referred to New Ways as having “no approval or recognition from the Catholic Church.”

Now, the group is hoping the Vatican will include them among the list of official pilgrimage groups read aloud at the audience. They’d also love to get close enough to the pope to shake his hand and maybe pose for a picture as he passes through the crowds.

If those sound like small steps, LGBT Catholics say they would, in fact, represent a huge leap forward considering how they were treated under the papacies of Benedict and St. John Paul II. Francis, on the other hand, has clearly shifted the tone of the conversation, even if substantial changes remain elusive.

The shift began with one of Francis’ signature lines, from an in-flight press conference a few months after his election in 2013, when he was asked about whether a gay man could be a priest. “If someone is gay and he searches for the Lord and has good will, who am I to judge?” Francis famously said. He even used the English word “gay,” something no pope had ever done, as most bishops prefer the more clinical term “homosexual.”

A few months later, Francis personally responded to an appeal from a gay Catholic group in Florence, telling them he enjoyed and appreciated their letter and assuring them of his blessing. Then last month, it emerged Francis met with a transgender person from Spain who had written to the pope—with assistance from his bishop—after feeling rejected by his parish because of his sex-change operation. It was a moving moment for Diego Neria Lejarraga, and many LGBT Catholics.

“This man loves the whole world,” he told CNN, referring to Francis. “I think there’s not—in his head, in his way of thinking, discrimination against anyone. I’m speaking about him, not the institution.”

Francis also encouraged discussions of the church’s outreach to gay and lesbian Catholics at last October’s summit of top cardinals and bishops on family life—discussions that produced some remarkable, even unprecedented, praise from church leaders to the faith and witness of LGBT Catholics.

At the same time, Francis has frequently reiterated the church’s teaching that marriage is only between a man and a woman, and he has ripped what he calls the “ideological colonization of the family” by the West, language that refers in part to efforts to promote gay marriage and other issues in developing countries. He has also blasted “gender theory,” which for many is a suspect buzzword of secular culture.

Still, the New Ways leaders and many gay Catholics see real reasons for hope, and not just for themselves. Since the start of his papacy, Francis has sought to shift the hierarchy’s focus away from what he said is an “obsession” with sexual issues and toward a greater concern for the poor and all those rejected by the church and society, a social justice priority that many gay Catholics also share.

In addition, LGBT Catholics see the shift toward open discussion of a range of topics as good for the church, and themselves. “While LGBT Catholics hope for changes, they are realistic enough to know that Francis may not make those changes,” said DeBernardo. “But he is doing things that will help their spiritual lives.”

DeBernardo said many gay Catholics are not looking for approval from the church as much an acknowledgment of their existence and a willingness to “treat them as human beings.”

A photo-op or shout-out at Wednesday’s audience might be one such acknowledgement. “We take the long view,” Gramick said, “and every step is progress.”