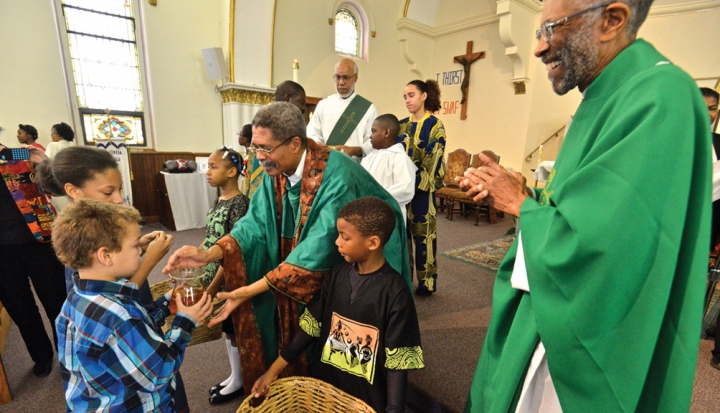 Black Catholics must challenge their fellow believers to live up to the church’s moral teachings on issues of race.

Every February we celebrate the heritage of African Americans in the United States. For Catholics, this month has a twofold significance. First, in the words of black Catholic historian and Benedictine monk Cyprian Davis, it provides an opportunity to highlight the fact that “the Catholic Church in the United States has never been a white European church.” Indeed, Father Davis documents how persons of African descent have shaped our church at every stage of its history.

They have been models of holiness who are now being considered for sainthood, such as Augustus Tolton, the first recognized black man to be ordained a priest; Henriette Delille, a woman of color who founded the Sisters of the Holy Family for black women; and Pierre Toussaint, a black man of 19th-century New York renowned for his life of charity.

Black Catholics also have been pioneers for social justice, such as Sister Antona Ebo, one of the famous “Sisters of Selma,” who was among the first American nuns to march with Martin Luther King Jr. for civil rights. Black Catholics, such as Daniel Rudd of Cincinnati, created the first sustained lay-led movement for ecclesial change in the United States, namely the Black Catholic Congresses of the late 1800s, which advocated major changes in how our church engaged its believers of color. Davis shows us that American Catholics would not be who we are without the contributions of believers of African heritage—too often an overlooked presence.

Yet this month has another significance for U.S. Catholics. It is a timely reminder of the unfinished work for racial justice in both our country and our church. Davis’ words are haunting and piercing: “The story of African American Catholicism is the story of a people who obstinately clung to a faith that gave them sustenance, even when it did not make them welcome. … Blacks had to fight for their faith; but their fight was often with members of their own [church] household.”

This observation is especially pertinent as our nation deals with the deaths of hundreds of unarmed black men at the hands of police officers, including a 12-year-old boy killed while playing with a toy gun on a Cleveland playground. While the circumstances of these shootings vary, and in some cases the judicial processes are still unfolding, there is a pattern here that is wrenching and disturbing. Perhaps, however, this pattern is seen only when one steps back from the particulars of specific situations and looks at the picture in its totality.

For black Catholics, it reflects both a pervasive criminalization of black men and a lack of empathy on the part of the majority of our citizens toward the injustice that afflicts them. For too many Americans, the tragic effects of such aggressive policing seem perhaps unfortunate but reasonable—the necessary price for security from a largely unsubstantiated sense of threat and danger.

The history of black Catholics shows that they are both proud of their Catholic faith and yet, at the same time and in the name of that faith, sharply critical of their church’s failures in witnessing to the universal inclusion that it proclaims. Davis observes that black Catholics are neither “rebels” nor a “loyal opposition.” Instead, they are a prophetic challenge to their fellow believers to live up to authentic Catholic belief and morality.

In this present crisis, because our faith proclaims that all are created in God’s image, we know that all lives matter to God. Therefore, black lives must matter to us as well.

As we observe Black History Month, then, we celebrate how the Catholic Church in the United States, by God’s grace, has become a microcosm of the world’s peoples and embraces believers of every hue and color. We also remind ourselves that Catholic faith demands an active commitment to racial justice if we are faithful to the example of Jesus, who offered his life for the redemption of all.