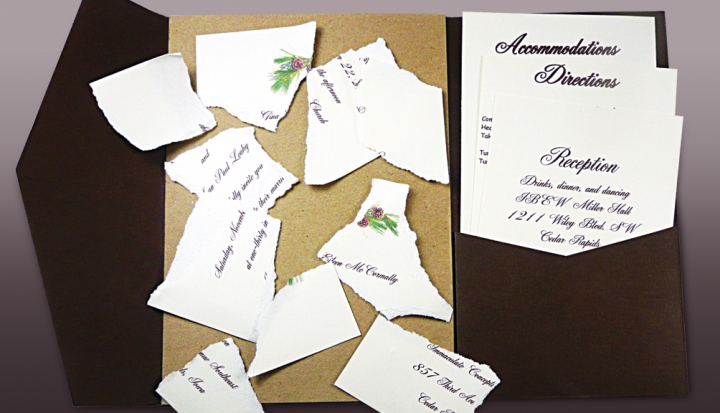 Millennials are hesitant to pass judgment on the importance of marriage, but that doesn’t mean they don’t believe in saying “I do.”

The closing scene of the Fox sitcom New Girl’s season premiere this fall struck a chord in me. Main character Jess and her roommates, Schmidt, Winston, Coach, and Nick, and her best friend Cece, dance around their L.A. loft’s kitchen removing the scores of wedding invitations fully covering the front of the refrigerator. (At the beginning of the episode, Jess is unable to even open the door, and sighs upon failing, “But I’m so hungry.”)

“Kevin and Rebecca request the honor of your presence,” Jess reads aloud in a mock sweet tone before quickly shifting to biting sarcasm. “How about the honor of my garbage can?” The gang cheers as Jess throws the invite into the trash with purpose.

For the characters who’d spent their summer weekends attending 11 weddings, the scene portrayed a moment of catharsis. They’ve decided to quit attending them. One by one, invitations are torn into pieces and tossed into the air.

The writers of New Girl certainly have their fingers on the pulse of millennials, if the writing staff doesn’t have a few millennials itself. This past summer, Pew Research Center released the results of a survey that showed the number of unmarried American adults is at a record high, while the value they put on the importance of marriage is on the decline.

Researchers Wendy Wang and Kim Parker point to several reasons: The rising median age of marriage (27 for women and 29 for men, compared to 20 and 23 for women and men, respectively, in 1960), and a rising trend of cohabiting and raising children without first marrying. “In addition, shifting public attitudes, hard economic times, and changing demographic patterns may all be contributing to the rising share of never-married adults,” Wang and Parker write.

“Spouse-hunting” and “baby-making” is how Emma Green refers to marriage and children in an Atlantic blog post about the data. “People clearly aren’t buying the argument conservative sociologists from Robert Putnam to Brad Wilcox have been making for years, that marriage is essential for thriving communities,” Green writes. “Society, people seem to think, will be just fine without it.” I can’t help but find her tone flippant if not entirely dismissive of anyone who’d choose to “spouse hunt” or “make babies” or think that such things would benefit society.

Author and demographer Neil Howe, in an opinion piece on Forbes.com, reassures readers that “marriage as an ideal is still intact.” He cites data from Monitoring the Future, an organization that studies American secondary school students, college students, and young adults. Seventy-eight percent of female high school seniors and 70 percent of their male counterparts say “having a good marriage and family life is ‘extremely important’ to them.” And those numbers have changed little in 40-plus years, according to Monitoring the Future.

Howe finds, however, the “ideal” of marriage is simply not equally attainable across economic classes. In fact, several studies show a correlation between marriage rates and education levels. Some sociologists and commentators say opting out of marriage, especially for women, is a luxury afforded only to the high-earning and highly educated.

There are a zillion ways to analyze the data regarding marriage rates and attitudes. The generation can be described in terms of their highly individualistic nature. They have astounding faith in themselves and their abilities—perhaps a reason why they seem to reject social institutions like church and marriage. They’re also often defined by their altruism and high rates of volunteerism.

Speaking from my experience in the trenches, somewhere between the older end of the millennials and the younger end of the generation X spectrum, it’s the attitude of “tolerance” my friends and peers espouse that I think has something to do with the change in attitudes. Green’s flippancy and use of the term “judge-y” in her Atlantic post on the marriage survey results perfectly encapsulate this for me.

Green’s writing betrays that value of tolerance, the interpretation of which is often summarized by millennials with the phrase “You do you,” above all else. (Older generations might recognize this as “To each his own.”) The Pew survey asks nothing about the passing of judgment in this particular survey but simply whether making marriage and family a priority is important for society.

I think my peers, and especially those still in their 20s, feel that making any sort of sweeping commentary on what is “good” or “important” for society is considered judgmental. In other words, I wonder if more millennials do think marriage and family are important but are unwilling to admit so because it is such a clear violation of “You do you.” Who am I to say what others’ priorities should be?

So this marriage thing may have less to do with what we think about marriage and more to do with the conundrum of living in an incredibly diverse society where we are increasingly aware of our differences. We might just be responding to the challenges of diversity by becoming more individualistic, afraid to step on any toes by espousing values and priorities we think anyone other than ourselves ought to consider. Maybe marriage isn’t actually in trouble at all and the shifting attitudes around it are merely a symptom of the larger reality of individualism writ extra large.