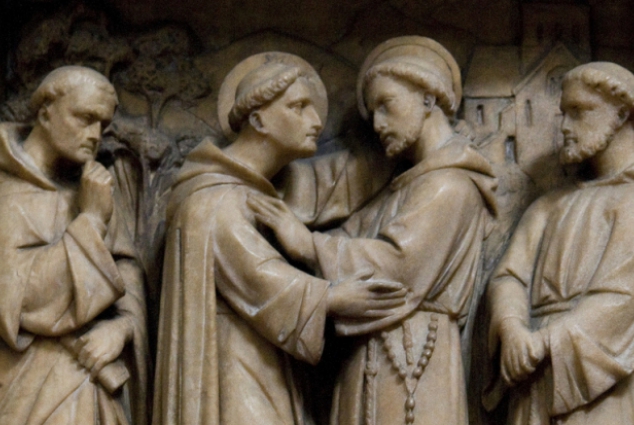 Borrowing from the Letter to the Hebrews and from theologian and Sister of St. Joseph Elizabeth Johnson, we can imagine the communion of saints as a giant stadium of people, all of whom have run, or are running, a great race. As each of us takes our turn at the starting line, we are lifted up by the love and encouragement of all those who know well the challenges ahead of us and who have stayed to accompany us and cheer us on. “It is a matter of being inspired by the whole lot of them, this cloud of witnesses to the living God,” writes Johnson, quoting Hebrews: “Therefore, since we are surrounded by so great a cloud of witnesses, let us also lay aside every weight and the sin that clings so closely, and let us run with perseverance the race that is set before us” (12:1-2).

References to the communion of saints in Catholic belief can be found as far back as the fourth century. The term appears in the Apostles’ Creed, thought to have been written in the fifth century. In Eastern churches it meant primarily a communion of “holy things”—our sharing in one baptism and especially in the Eucharist, which both represents and brings about our unity as one body of Christ.

In the West, the communion of saints more commonly means a communion of “holy ones,” both the living and the dead. Remember that in the New Testament, “saints” means not canonized saints (a much later development), but rather all the people of God. Paul began one of his letters, “To all the saints in Christ Jesus who are in Philippi” (Phil. 1:1).

The communion of saints encompasses not only all believers in Christ, but, according to many scholars, all those of truth and love, in whom the Spirit is at work. This includes those on earth, those still journeying to God in the purification process Catholics call purgatory, and those who now abide in God. The old terminology for these three states was “the church militant” on earth, “the church suffering” in purgatory, and “the church triumphant” in heaven. Together we all make up the church, the body of Christ.

The best thing about the communion of saints is that it connects us all—because we are one body. When we celebrate the Eucharist, we pray with all those who have gone before us. We living can pray for the dead, “the souls in purgatory,” who need prayers on their journey to God. The multitude in heaven pray for the rest of us, inspire us by their example, and remain present to us in ways of which we know not. “I will spend my heaven doing good on earth,” said St. Thérèse of Lisieux before her death.

So we are bound, in some marvelous, inexplicable way, to those who’ve gone before us. Boston College’s Father Michael Himes has written that being part of a long tradition frees us from being merely people of our own age—we can converse with our ancestors, with Mozart and Teresa of Àvila, Dante and Madame Curie, Euclid and Jane Austen. “In the Catholic tradition,” he says, “we call this the communion of saints.”