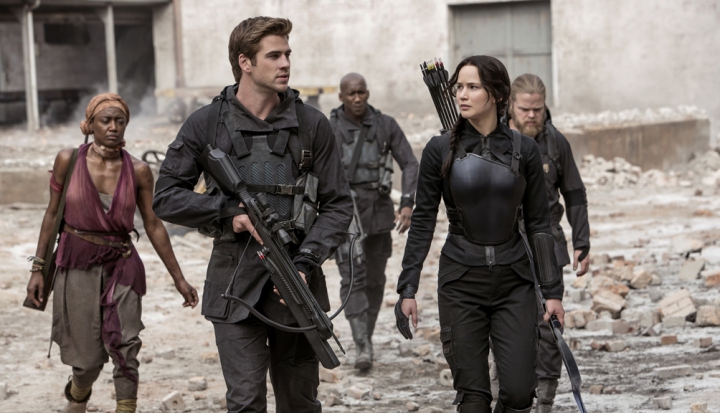 The third film in the The Hunger Games dystopian franchise, Mockingjay—Part 1, opens on a nation, Panem, at the brink of civil war. Ruled by the technologically advanced city, the Capitol, and the oppressive President Snow (Donald Sutherland), the residents of the surrounding 12 districts are subjected to poverty, brutality, starvation, and near slave-like working conditions while the Captiol luxuriates in wealth and excess. Based on the popular books by Suzanne Collins, the world of Panem is a dark and volatile place which we discover through the eyes of the movie’s protagonist, Katniss Everdeen (Jennifer Lawrence).

Our first glimpse of Katniss in The Hunger Games, the 16-year-old volunteers to enter an arena and fight to the death on live television to prevent her younger sister from suffering the same fate. Surviving that ordeal is not without a cost, and in Catching Fire we see the toll it has taken on both Katniss and her co-victor, Peeta (Josh Hutcherson), as they show signs of post-traumatic stress disorder (PTSD). Just as the two begin to find emotional stability, they learn they will once again be forced to enter the arena and fight.

Mockingjay-Part 1 picks up where Catching Fire ends, with Katniss’ rescue from the arena and her realization that not only was Peeta left behind, but in retaliation for the rescue—which she had no advance knowledge of—The Capitol has bombed and destroyed her home, District 12. Katniss has unintentionally become the lightning rod that jump-starts the rebellion. Katniss must now choose to be the face of the rebellion and unify the remaining 11 districts to overthrow the Capitol.

Overall, the move is a solid sequel. It doesn’t quite stand on its own, so don’t walk into the theater without having watched the previous movies or read the books. There is little attempt to bring the audience up to speed. Nor does it strictly follow the source material; you’ll find there are some small but significant edits made to the film adaption. Overall the filmmakers sparingly altered the storyline and succeeded in making the first half of the book feel like a complete movie while still building the foundation for the yet-to-be released fourth and final installment, Mockingjay-Part 2.

More than anything, Mockingjay-Part 1 is a war movie full of “moves and countermoves” as President Snow ominously says as he contemplates how to best use his political prisoner Peeta. As such, it is a decidedly different tone than the previous two installations, and the young adult series takes yet another step toward adulthood as their actions and consequences have real and lasting effects.

Katniss—still suffering from crippling PTSD—is not in control of herself nor of the rebellion fighting behind her. But she keeps fighting. And that is why we keep watching.

This is a web-only review.

Angela Cox is the design and production editor of U.S. Catholic.