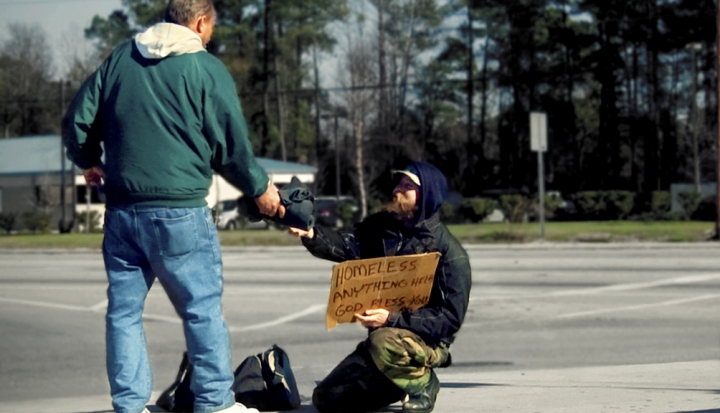 Creating a culture of encounter requires more than just organizing drives. It might even mean learning a name or two.

About 10 years ago, during a college Christmas break, I spent a couple of days with a group of classmates at a Franciscan community of priests and brothers in the South Bronx. One night we packed a van with sandwiches and a tank of hot chocolate, and a friar named Brother Giuseppe drove us down to Lower Manhattan. We parked and unloaded at a street corner where the Franciscans spend time with the homeless all year round.

Within a few minutes, people began to gather. We handed out sandwiches and chatted. A middle-aged man came up to me, smiled, and reached out his hand. “Jian,” he said.

Jian, who was originally from Asia, couldn’t speak English, and I am distinctly monolingual, so we just stood there, smiling at each other. Five minutes passed, then 10. I thought about saying good night and looking for someone else to give a sandwich to. But Jian wasn’t going anywhere. I didn’t know what to do. Thirty minutes went by. Forty-five. An hour.

The rest of the group was milling around and pouring hot chocolate. I nervously shifted back and forth. What if Brother Giuseppe or one of the students noticed me standing there not doing anything?

Finally, after two hours of this, Brother Giuseppe said it was time to go. I pointed to the van and shrugged. Jian offered his hand again and his grin widened. Utterly perplexed, I climbed into the front passenger seat, next to Brother Giuseppe. “Um, I’m not sure if you saw that,” I said, “but I just stood with someone named Jian for two hours without saying a word. We just smiled at each other.”

“Well, if he was out here tonight, he must be having a pretty rough go of it. How many people do you think walk past him every day without even making eye contact or asking his name?” Brother Giuseppe said. “Maybe it’s better to look someone in the eye and learn their name than it is to hand over a $5 bill and turn away.” This was not the answer I was hoping for. There was no solution in it, and I love to fix things. I wanted Brother Giuseppe to tell me how I could’ve solved Jian’s problems. Just tell me what to do and I’ll do it.

I have been thinking about this story a lot recently. The city where I work is stuck in a vicious cycle of poverty and violence. My office is next to the Catholic cathedral, and the parish has a ministry that provides food and other basics to hundreds of people every day, many of whom are living with addiction or mental illness. Each morning, on the 30-second walk from the parking lot to my building, I pass people who remind me of Jian. And usually, I am just as uncomfortable as I was that night in New York, because the suffering is ugly and smells bad and I still have no solutions.

After some of the most gut-wrenching morning walks, I’ve tried to search Brother Giuseppe’s message for some practical advice. Perhaps his point was that there is no good practical advice. In his own gentle way, Brother Giuseppe was telling me that my default approach is out of whack. Instead of starting with solutions to injustices, we should start with relationships.

I suspect this idea is challenging for many of us. Given, say, our nation’s love of advice columns, home makeover shows, and fad diets, it’s fair to assume most Americans share my preference for the quick fix. When we apply this disposition to social problems, what happens? Usually, we end up organizing a whole lot of drives: food drives, clothing drives, fund drives, Christmas gift drives, and so on.

Drives seem to be clear-cut, convenient solutions that have the added benefit of helping us feel good about ourselves. We don’t have to confront any suffering or ask difficult questions about the world. We can bag up our extra stuff and drop it off at church. Someone else will bring it to the poor on our behalf.

But if we want to be disciples following Christ by loving God and neighbor, drives are not enough. After all, Jesus doesn’t organize a single drive in scripture. Instead, on page after page of the gospels, he offers the gift of himself. Jesus gives his undivided attention to every sort of outsider you could find in first-century Palestine: lepers, tax collectors, sinners and condemned criminals, women, Samaritans, the disabled, the materially poor.

If we have any hope of alleviating the world’s pains, we must begin by going to those people who have been pushed aside and spending time with them. “You can’t fight poverty if you don’t know any poor people,” a missionary priest friend of mine likes to say. This echoes the words of the Dominican theologian Father Gustavo Gutiérrez: “So you say you love the poor. Name them.” Generosity is great, but we are not following Christ’s example of walking with the poor and vulnerable by donating to a drive.

Pope Francis has stressed this theme throughout his papacy. He talks about a “throwaway culture” in which people who are seen as burdensome or useless are cast aside. Victims of this culture comprise a modern group of Jesus’ closest friends in scripture: single mothers, death row inmates, homeless senior citizens, and more.

Our faith-filled response, Pope Francis suggests, must be to build a “culture of encounter,” centered on getting to know people who are usually forgotten. “Lord, teach us to step outside ourselves,” he tweeted last August. “Teach us to go out into the streets and manifest your love.”

The Holy Father lives this prayer all the time, perhaps most poignantly when he stopped to embrace Vinicio, a man covered with tumors, at a general audience in St. Peter’s Square. “I felt I was returning home 10 years younger, as if a load had been lifted,” Vinicio said a few weeks later. As images of the meeting swept over the Internet, what struck me most was the look on Pope Francis’ face—a mixture of gentleness and pain. It was an outward expression of an interior change. Pope Francis’ heart was broken open as Vinicio experienced healing.

This mutual transformation represents a key aspect of a culture of encounter, but it is absent in the culture of the food drive, which presupposes a fortunate person who gives and a less fortunate person who receives. Encounter does not include the fixed roles of giver and receiver. It is about the two-way growth of kinship between people across the barriers that divide us. When we spend time and energy developing these relationships, we live our belief that every single person is precious because each person is created in the image and likeness of God. Here are three steps you can take this month to work on building a culture of encounter that begins in your own faith community and reaches outward:

1. Plan a trip for a small group of parishioners to spend time with the poor and vulnerable. Find an organization that facilitates relationships across socioeconomic lines, where your group can sit down with those who are marginalized and get to know them. Two key points here: Get off the parish property and partner with an agency. Organizations that are doing this work every day (soup kitchens, homeless shelters, nursing homes, etc.) know what’s safe and what’s needed. Contact your diocesan Catholic Charities agency or parish social action office for help finding a good partner. Personally invite other parishioners to join you.

2. After the experience, reflect on it. Ask big questions: What was the encounter like? Who did you meet? What stories did you hear? Why do you think the people we met are in the situation they’re in? Did you see God at work? In the words of Mother Teresa, did you meet Christ “in his most distressing disguise”? This reflection is essential, as it helps change people in a big way. When “the poor” or “the homeless” stop being groups of statistical data points and become real people with real stories, those of us from more privileged backgrounds can experience a significant reorientation of values and priorities.

3. Repeat steps 1 and 2. Building kinship on the margins is not a one-shot deal. Once you’ve found a good community partner, plan a monthly trip there, and keep inviting new people to join you.

This work of encounter is challenging because it takes time, it doesn’t “fix” anything, and it can be unpleasant. But it is also an incredible opportunity to participate in the Lord’s work of love in the world. At the end of the Good Samaritan parable, Jesus tells his disciples—he tells us—to imitate the Samaritan’s self-giving work of mercy. “Go and do likewise,” he says. What an honor to have been invited!

All I did that night a decade ago was learn Jian’s name and stand there with him, but I think it was a small step in the right direction. How will you respond to Christ’s invitation to build kinship with those living on society’s margins? Whose name will you learn?

1. I can honestly say I know a person by name who is living in poverty.

2. Personally knowing poor people is not as important as working to fix policies that create so many poor people in the first place.

Representative of “other”:
“Putting a face and name to the poor can motivate change and inform policy.”

3. The best way to serve the poor is:

1% – Through charitable organizations that provide material assistance to those in need.
1% – Through efforts to create systemic change that prevents people from falling into poverty in the first place.
8% – Through personal one-on-one encounters that build relationships.
90% – Some combination of all of the above.

4. I encounter people in poverty on a regular basis as part of my daily routine.

5. My efforts to help the poor include:

80% – Writing a check to charitable organizations.
90% – Dropping off items like food or clothing at donation centers.
62% – Volunteering at organizations that serve the poor directly, like soup kitchens or shelters.
39% – Meeting people out on the street and helping them individually.
20% – Other

Representative of “other”:
“I work in a public institution that serves people in poverty on a regular basis.”

6. I sometimes find myself making distinctions in my mind about which poor people truly deserve to be helped.

7. I would be afraid to visit some of the neighborhoods in my town where poor people live.

8. I don’t think it really makes a difference whether or not I know someone living in poverty.

Results are based on survey responses from 224 USCatholic.org visitors.

Michael Jordan Laskey is the director of Life and Justice Ministries for the Diocese of Camden, New Jersey.