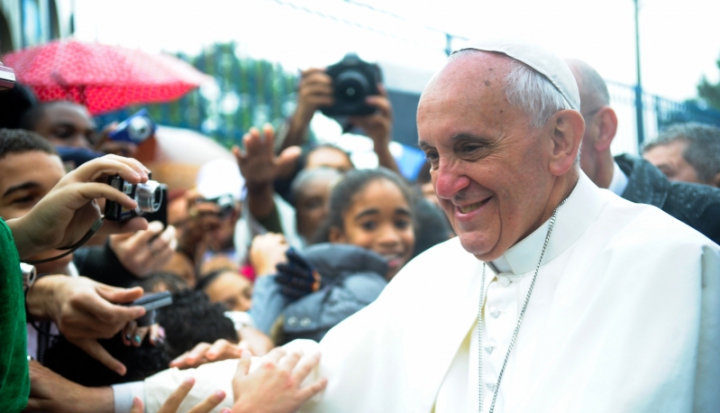 Francis has conservatives talking schism. But a split is easier said than done.

(RNS) Many conservative Catholics have long viewed Pope Francis with suspicion thanks to his effort to shift the church’s focus away from a culture war agenda and toward a more welcoming approach and a greater emphasis on serving the poor. But last month’s controversial Vatican summit on the modern family, with the push by Francis and his allies to translate that inclusive view into concrete policies on gays and divorced and remarried Catholics, for example, seems to have marked a tipping point, with some raising the specter of a schism—a formal split that is viewed as the “nuclear option” for dissenters.

New York Times columnist Ross Douthat, a Catholic, crystallized the peril in an October 25 column warning the pope not to “break the church” to promote his goals, saying that if Francis continues to alienate conservative Catholics it could lead to “a real schism.” Douthat had raised the possibility of “an outright schism” earlier this year, as well, and his warnings have been echoed by a number of other church leaders and commentators. The anxiety has also drawn increasing media speculation about the possibility of some Catholics splintering off.

So is a schism, with its echoes of medieval debates and heretics burning at the stake, a realistic possibility? And can an independent Catholic church be successful in the modern world?

In today’s church, the track record indicates that breaking away is much easier said than done. The Catholic Church is a hierarchical institution organized around a pope who consecrates bishops who ordain priests who celebrate the sacraments in parish churches. That’s a lot of infrastructure to create, and pay for; it’s not like a zealous Baptist who can start a new congregation with a Bible, a river, and maybe a tent.

Then there is the psychological factor: “There is a huge priority on unity” in Roman Catholicism, said Julie Byrne, a religion professor at Hofstra University and author of The Other Catholics, a book due out next year that looks at groups that have split from Rome over the years. “To do something differently you have to make a huge psychic jump to where independent Catholics are—saying that visible unity is not important and invisible unity is already there,” she said.

Kathleen Sprows Cummings, director of the Cushwa Center for the Study of American Catholicism at the University of Notre Dame, noted that to reach a critical mass “you need ordinary people in the pews to get concerned and engaged.” Cummings doubted the issues being debated in Rome and among Catholic intellectuals would resonate with most parishioners. “There are a lot of people who disagree with the church on a range of issues,” she said. “But leaving, actually severing the connection, is a different thing.”

Yet over the years there have been a surprisingly large number of attempts to set up an independent Catholic church, with varying degrees of success: Byrne has counted as many as 250 independent Catholic bodies in the United States—with at least one bishop and several priests—and between 500,000 and a million followers, a figure she said is a “very loose estimate.”

Just trying to keep an accurate tally is hard, she said, because the vast majority of schismatics start and end as single congregations, renting space from another church or meeting in homes. They also go in and out of existence all the time, like fauna in the Amazon. If they last 50 years, Byrne said, that is “completely amazing.”

Most breakaway Catholic churches tend to define themselves by standard Catholic characteristics: an apostolic succession—meaning a bishop as overseer—and priests and the sacraments. They also cling loyally to the word “Catholic.”

Beyond that, there seem to be as many reasons for splitting as there are schisms, and they range across the spectrum from liberal groups that want women priests to Latin Mass traditionalists who want an old-style liturgy. (The actor Mel Gibson, a devotee of the old Latin rite, built his own church near his home in Malibu, California).

Back in 1946, for example, a former seminarian in Atlanta, George Hyde, was so upset that the church denied communion to gay Catholics that he set up a gay-friendly Catholic church.

Racial and ethnic tensions have often been the source of schisms. In 1990, an African-American priest in Washington, Father George Stallings, split with the archdiocese and set up his own church—the Imani Temple African-American Catholic Congregation, which recently moved to the Maryland suburbs—to minister to black Catholics in particular.

A century earlier, Polish immigrants started the Polish National Catholic Church (PNCC) because they were upset that there were so few Polish priests for their parishes and hardly any Polish bishops in a U.S. hierarchy they saw as deaf to their needs. The PNCC continues to thrive; it has some 25,000 adherents in five dioceses and its parishes are reportedly in the black. The PNCC is affiliated with another, older independent denomination, the so-called “Old Catholics” who broke with Rome in the 19th century over issues of papal infallibility.

Ethnicity and local control,  which, like liturgical disputes, are the chief driver of church splits, remain powerful forces, as seen by the successful effort of a Polish parish in St. Louis, St. Stanislaus Kostka Church, to split with the archdiocese in 2013 in a fight over control of the church’s assets.

While there are as many stories as there are schisms, a common motivator in the splits is authority—as in too much authority exerted by the bishops and the popes. As the Catholic Church has centralized authority in the Vatican and in the person of the pope, many Catholics have chafed as they want to maintain customs not in keeping with the Vatican’s wishes.

Francis has in fact said he wants to decentralize authority and increase collegiality, and he met last week (October 30) with leaders of the Old Catholics and told them that there have been “grave sins and human faults” on both sides. The pope added that “change is inevitable” as they move to restore unity. The paradox is that even if Francis is successful in downsizing the pope’s central role and in healing a schism like the one with the Old Catholics, the steps he would need to take to accomplish those goals might wind up alienating another set of Catholics.