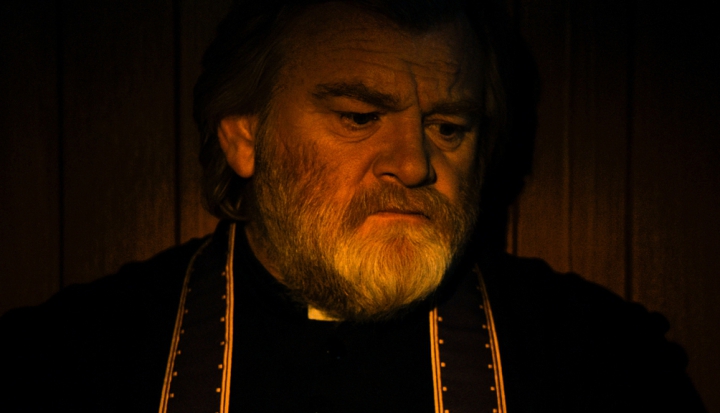 The fate of the thieves crucified with Christ, from the Gospel of Luke, was also in Samuel Beckett’s Waiting for Godot. “It’s a reasonable percentage,” observes Vladimir.

The odds don’t seem that good in Calvary, where a gruff, grace-filled priest, Father James Lavelle (Brendan Gleeson), does his best to minister to parishioners who mock him for the sins of the church and who stubbornly, triumphantly persist in their own sins. Ireland, even beautiful Sligo, on Eire’s green, windswept west coast, is post-Catholic here. The authority of the Church is little more than a bitter memory and no one is more aware of this than Father James.

In the film’s first scene, we’re introduced to Father James’s rumpled face as he listens to a man’s confession. The unseen parishioner on the other side of the grill tells him that a priest raped him for years beginning when he was seven years old. The speaker can’t take revenge on that deceased priest, no point in killing a bad priest anyway, he says. But killing a good priest? “They wouldn't know what to make of that …. I'm going to kill you, Father…. I’m going to kill you because you're innocent.”

The film’s dark outer mystery revolves around which parishioner this is who plans to kill Father James in a week’s time on the beach. Father James thinks he knows, but we, the audience, don’t.

Calvary’s inner mysteries deal with life’s meaning and forgiveness, and our desire to believe our sins are ours alone, not hurting anyone else.

During what is perhaps his last week, Father James reconnects with his daughter, Fiona (Kelly Reilly). He became a priest as a widower, and Fiona has come from rehab to stay with him. She’s recovering from a suicide attempt and tells him he emotionally abandoned her for the church after the mother died. “When I needed you most.”

As father and daughter try to mend their relationship, the priest also deals with parishioners. There’s a nihilist doctor who stubs out his cigarette in what looks like a human heart; a jailed serial murderer who jokes about his crimes but then plaintively asks didn’t God create him too; a lonely young man who feels he’s “exhausted all the possibilities of pornography” and so is considering either suicide or joining the Army; a butcher who may have punched his adulterous wife but insists he’s actually glad she’s gone: “I can't make any sense out of her. I think she's bipolar. Or lactose intolerant. One of the two.” The wife’s lover dismissively flicks his cigarette ash at Father James when the priest tells him not to beat her again. “Run along now, Father. Your sermon is finished.”

Just how far the church has fallen is brutally illustrated in a wrenching scene where Father James chats with a middle-school-age girl as they walk near the beach. A car screeches to a stop, blocking their way. The girl’s father leaps out, panicked at seeing her speaking to a priest, and orders her into the car. “What were you saying to her?” he demands of Father James.

Calvary is an intelligent, redemptive, sorrow-filled, and laugh-out-loud film to share with others, for if you’re like me it will leave you wanting to talk about it for days afterwards. It’s meaningful even for those who don’t know what Calvary means. Father James’s journey brings Christ’s story of sacrifice and redemption into our own age. Metaphorically, it hits all the right notes in multiple layers of meaning, and Gleeson’s performance soars. There’s also fodder for criticism, for me especially in Father James’s choices. (What about abandoning that daughter? And how about “lead me not into temptation”?) That’s part of what makes Calvary so thought provoking and worthy of discussion.

This is a web-only review.