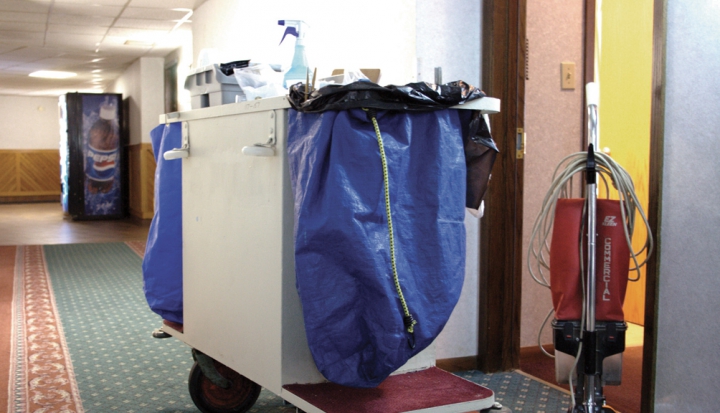 Want to see “the other America”? Just keep your eyes peeled the next time you stay in a hotel.

Marta cleaned my hotel room when I attended a recent conference. Rather than leave when she arrived, I invited her to work while I continued to hone a presentation for later that day. I was distracted by her presence, though—partly out of embarrassment over the TV program that provided mindless background noise, The Real Housewives of New York. Yet also because I felt a kinship with her.

Years ago I worked in the hotel industry as a front desk manager. As part of my orientation, I spent a week cleaning rooms. The job was much more difficult than I would have imagined: scrubbing, vacuuming, lifting, eradicating all kinds of messiness, not to mention pushing a heavy cart, with a quota of 13 rooms for my eight-hour shift.

Remembering how exhausted I had felt after a day’s work, I asked how long she had been doing this. “For about 10 years,” she answered, in heavily accented English. As we talked I learned that she was engaged to the father of her two children and that her mother cared for them while she and her fiancé were at work.

She finished the room; I completed my presentation and rushed to find a taxi. Then I saw Marta again, boarding a shuttle bus with other hotel employees. The doorman told me the bus conveyed workers between the city’s center, where they lived, and their jobs at outlying hotels. Most of the hotel’s staff could not afford cars, and public transportation did not extend to this suburban location. Marta was being bused to a world far different from the one in which she worked—nothing like the manufactured reality of the supposedly “real housewives.”

A 1968 observation by Martin Luther King Jr. haunted me. In a speech called “The Other America,” King noted how two distinct nations coexist within our country. In one, people had “food and material necessities for their bodies, culture and education for their minds, [and] freedom and dignity for their spirits.” But the “other America” was a harsher place, where millions live in inadequate housing and young people attend schools “so devoid of quality . . .  that the best in these minds can never come out.”

King’s address seems even more chillingly accurate today. More than 15 percent of us now live in poverty, while another 33 percent scrape by as low income—these near-poor earn less than twice the federal poverty line, set artificially low at $23,850 for a family of four and thus an injustice unto itself. If King were here today, he would add that our “Americas” are more and more isolated. Relatively comfortable citizens increasingly have little contact with what life is really like for those who live in the “other America.”

This growing isolation between social classes imperils the possibility of a shared public life. Isolation fuels ignorance, indifference, and fear.

Thus the challenge that underlies current conversations about income inequality and wealth disparity is this: Beneath the statistics documenting the yawning chasm between the richest and poorest is a more disturbing reality of severe isolation from and indifference toward people like Marta.

Such isolation has moved Pope Francis to call for creating a “culture of encounter” with the poor among Christians. He says in last year’s apostolic exhortation, Evangelii Gaudium (The Joy of the Gospel), “The gospel tells us constantly to run the risk of a face-to-face encounter with others, with their physical presence which challenges us, with their pain and their pleas, with their joy which infects us . . . .” By “encounter,” Francis means sustained relationships with those hidden from our public notice. Only then will we be moved to compassion for the real housewives and families that inhabit our nation.

Of course, encounter with people like Marta will not eradicate the conditions that King described. It can, however, foster the empathy needed to muster the political will to ensure living wages, just working conditions, and quality education for all. Encounter is not enough, but it is a necessary beginning.