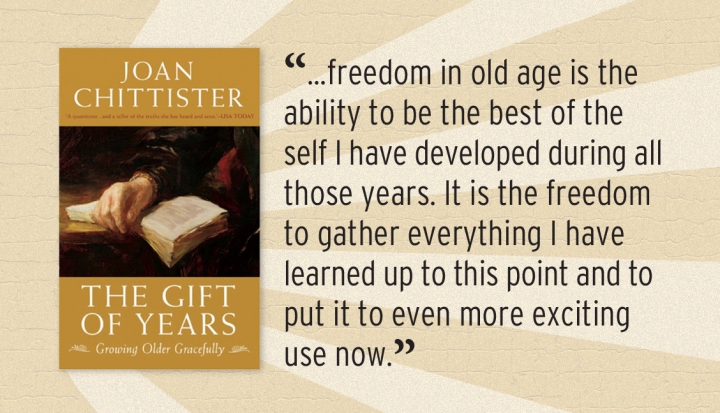 As we grow older, we no longer need to “fit in” but are free to be ourselves and explore new ideas.

It is a very comforting feeling to know that age does not change us. On the contrary. In some ways, we are all just getting to be more of who and what we have always been. Which means, of course, that we can decide right now what we intend to be like when we’re eighty: approachable and lovable, or tyrannous and fractious. We don’t, by nature, sour as we get older. The fact is that we have always been sour, but now we take the liberty of doing it with impunity. We don’t get softer as we get older. We simply get to be more unabashedly loving every day of our lovable old lives. We only get to be more of what we have always wanted to be. We are free now to choose the way we live in the world, the way we relate to the world around us, the attitudes we take to life, the meaning we get out of it, the gifts we put into it. And all of them can change.

In the 1970s, when she was in her mid-thirties, Sara was part of the early group of married American women “returning to graduate school.” She had two small children, a husband now professionally employed, and a farmhouse just beyond the boundary of the Big Ten university town that seethed with a new kind of energy on the other side of the mountain. She raised goats and did her own family garden, ate organic vegetables and pickled her own cucumbers. It was quite standard for the time, except that she wanted more.

She also wanted a master’s degree and, eventually, a doctorate, and by the time it was over she got both. But not for any discernible academic motives.

Instead, she was more than content to teach a few undergraduate courses and then leave academia to go back to what she called “the real world.” Once there, she settled down to writing columns for the small-town newspaper that served the general public in the area.

Eventually Sara moved down south to another small town where, to all appearances, she simply replicated the life she’d had before. Her daughters moved out of the area, her husband died, and she went on working for a rural newspaper, writing columns and publishing cookbooks.

It might all classify quite neatly under “Women: standard”— except for one thing. She retired from the paper at sixty-five and went to Thailand. There, she began to teach English as a second language to young women in Bangkok as part of an international volunteer program in developing countries. Sara, “free” for the first time in her life, had tied herself down again.

To some, the situation was at best troublesome—if not downright disturbing. Why would anyone do something like this? In that place? At her age?

It takes a while to figure it out, perhaps; but it’s not really all that difficult to understand. Sara didn’t want to be “free.” Sara wanted what she had always wanted. She wanted to be Sara. The rest of the world—the types who hype old age as some kind of adult playland—had simply misunderstood what “freedom” means.

The tendency to talk down to older people comes from stereotypes of incompetence that have been so much the caricatures we’ve drawn of older people once they have left the work force. Instead of honoring the wisdom and experience of the generations before us—as did the Greeks and the Romans and the American Indians, for instance—industrial/technological society infantilizes anyone whose life is no longer caught up in the skills and languages of that world. Once people can no longer talk about advertising plans or departmental goals or the job, the experience they garnered over the years is no longer a premium in the very society that produced it all. Instead, people grow useless by the end of the next quarterly report. Their so-called experience counts for nothing. They don’t know the system anymore. They don’t know the people. They don’t even know the manager, who has also been rotated out of the organization, just as they have been. All ties are cut. All connections have expired. All experience has gone to dust.

Instead, they are “free” to be useless, the window-dressing on the society, the people left behind after the system doesn’t need them anymore.

Sara did not want that kind of false freedom. Sara wanted to be Sara. She wanted to go on being more of what she had always been: productive, creative, engaged, necessary. So she went to Thailand to teach where no one would ask her age, and no one cared what it was. They simply knew that she was important to them.

She had found the secret of aging well. She redefined freedom for all the world to see.

Freedom, in childhood, may be the right to be totally self-centered. In adolescence, I am engaged in the fine art of concentrating on myself, until I know who I am and what I am capable of being. In midlife I am free to become skilled, to become prepared, to become expert, to become independent. But freedom in old age is the ability to be the best of the self I have developed during all those years. It is the freedom to gather everything I have learned up to this point and to put it to even more exciting use now. It is the freedom to give myself away to those who really need me, in ways I have never had the chance of doing before. I am free to be important to people with real needs. And with that new role in life, I become one of those rare people who know what it takes to go through life, survive its dislocations, outlive its expectations, and negotiate its shoals. Now I am free to do it not simply for my own sake— but for the sake of the world at large.

Freedom in later years is the exemption from having to live a standard-brand life. I no longer need to “fit in” to all the conventional wisdom, to the company policies and politics and political positions. I can take any position I want. I can be a socialist in a Republican club. I can be a feminist at a meeting of the pastoral planning commission. I can be an environmentalist at the oil company’s stockholders meeting. I can take all the pieces of my life, weigh them carefully, and then speak the words my world needs to hear—before it’s too late.

When I realize that freedom really is the right to be me, rather than someone else—perhaps for the first time in my life—the liberation of the soul begins. And with it the unshackling of the mind. I can become something new, as well as simply more of the old. Because whatever path it was that got me here is not the only path I have ever considered, ever been fascinated by, ever wanted to explore. So, why not now, when the exploration is boundaried by both common sense and a lifetime of experience?

I have the right now to explore new ideas, to think new thoughts. The ones I did not learn at home, the ones I have never dared to admit to in public. I can begin to think about God for myself, for instance. My answers will surely be as correct as anyone else’s—and a great deal closer to my heart.

Finally, I am now free to become involved in life in ways I never did before when all the directions were clear and all the expectations binding and all the responsibilities defined.

Now is the time to think it all through again. Everything. God, life, work, relationships, behaviors, goals. I am free now to measure all of them against my experience, to reshape them out of my new knowledge, to try things wherever my new spiritual energy leads me, to add new ideas to the old ideas that have controlled my life for so long.

A burden of these years is to allow all the stereotypes of old age to hold me back, to hold me down, to stop the flow of life in me.

A blessing of these years is that they give me the chance to break the bounds of a past life, and to create for myself a life more suited to what I now want to be.

This excerpt is from The Gift of Years: Growing Older Gracefully, by Joan Chittister, published by BlueBridge, an imprint of United Tribes Media Inc. Used by permission.

Heloise: Following her head and her heart