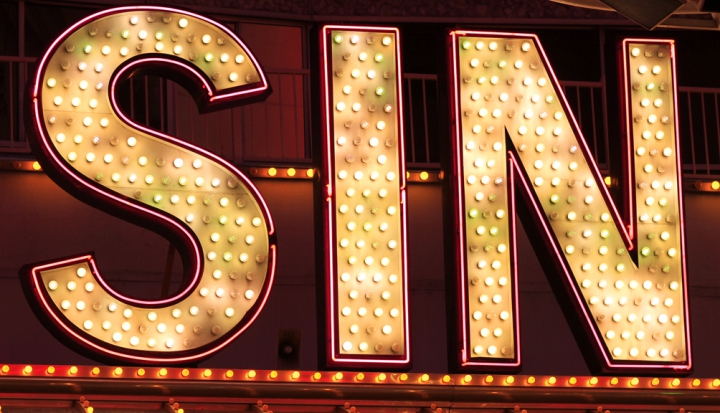 U.S. Catholic readers confess that sin isn’t what it used to be, but they still commit themselves to a virtuous lifestyle.

In his letter to the Romans, St. Paul reminds us that “all have sinned and fall short of the glory of God.” That Paul always was a bit of a downer. For a long time, the people in the pews had a fairly solid understanding of sin and what it meant to “fall short.” But good ol’ Paul lived a long time ago, and the times, they are a-changin’. These days, the first association that many people have with the seven deadly sins is Brad Pitt in the movie Seven. Sin, it seems, may have fallen out of favor, at least among the more than 300 people who took our U.S. Catholic reader survey.

“It’s time to update our theology of sin,” says Kathleen Gibbons Schuck from Blue Bell, Pennsylvania. She says that, in lieu of a language of condemnation, we should be using language that people can resonate with, such as “separation and breaking down of relationship.” Paul Schlachter of Miami, Florida agrees. To him, the seven deadly sins are “arbitrary and reflective of the mores of the times,” he says. “They focus excessively on individual cause and effect, leaving untouched the social consequences that pass unperceived.”

Many U.S. Catholic readers seem to agree with that sentiment—or at least agree that many Catholics think that way. Seventy-two percent of survey participants think that Catholics do not take sin as seriously as they used to. They offer myriad explanations for this. Madeline Gough of Laguna Woods, California believes that this is thanks to poor catechesis. “[Young people] are not being taught by parents and educators such as priests and schools about their faith,” she says.

Some people think that it is not poor catechesis, but rather the church’s lack of credibility that is contributing to a lackadaisical attitude. William Bagley of Madison, Connecticut thinks that many church leaders have become “pharisees” who are “more concerned with rules than with the care of people who struggle with their lives.” Cynthia (who requested that her last name not be used) from Erlanger, Kentucky has some personal experience with that kind of priest. “I went to confession in Mississippi one time,” she says, “and the priest was yelling at me because I couldn’t remember the last time I had gone to confession. I should have walked out of the confessional!”

Other people think that the concept of sin as a particular set of rules just doesn’t make sense anymore, knowing what we now know about psychology and mental health. Patt McCabe of Wicklow, Ireland points out, “Some sins are mental health issues, such as substance abuse or gambling.” Margaret Glose from Chippewa Falls, Wisconsin claims that we are more self-aware than we used to be, reducing the need for prescribed sins. She writes, “We are just developing our own awareness of what to feel guilty about instead of feeling guilty because someone else has told us we should.”

Of course, some of the participants in the survey had yet another take on why it is that Catholics are not darkening the doors of confessionals all that frequently: They still take sin seriously, but they also recognize that not every sin requires a visit to your local confessor. Margot VanEtten of Rochester, New York explains, “I remember a priest describing what it was like to hear weekly confessions back in the day when you had to do that if you wanted to go to communion. He said, ‘It was like being stoned to death with popcorn.’ People were confessing to things that weren’t really sins, or trying to dredge up something to confess so they could receive communion.”

Not everyone is down on sin, however. Seventy-four percent of those responding to the survey report that they think the seven deadly sins remain a helpful guide for how to live our lives and how to treat others. Many people think that talking about sin does retain value, mostly because it gives us a way to examine our consciences. Jennifer Warden of Salem, Oregon says, “I think we tend to minimize sin. I think people today are very susceptible to the spirit of the age. We’re very relativistic and permissive. We don’t want to examine ourselves or judge others.”

Geraldine O’Mahoney of Stuart, Florida thinks that regardless of why people are not going to confession, they still need to. “Human nature does not change,” she says. “And God’s moral law certainly doesn’t change—therefore neither does the objective sinfulness of certain actions, nor our need for sacramental confession.”

Although about 30 percent of survey respondents claim that they can’t remember the last time they went to confession, many still think there is a need for the sacrament. Mitch Finley of Spokane, Washington agrees that going to confession is important, but he would like to see the church get a little more creative in how they handle it. “The fact is that there is a need for several options for celebrating the sacrament of reconciliation, one of which would be confession in private to a priest,” he says. “We need a communal reconciliation ritual, and if we had one, I think that it would be well attended.”

Dennis Winkelsas of Norfolk, Virginia agrees. “The church should go back to general or communal penance services,” he says. “I firmly believe that these services promoted a greater sense of sin, and a greater resolve of turning away from sin.”

If people are conflicted about the significance of sin in general, they are equally conflicted about what specifically counts as sin. In Greeley, Colorado, Elaine Hicks says that the sin she takes most seriously is “wrath, because it oftentimes is the result of feeling greed, envy, pride, and lust toward another.” Mary Branson of Mokpo, South Korea says that for her, “being judgmental” is her most serious sin.

One thing that most people seem to agree on, however, is that some aspects of the world have shifted rather significantly, and that affects the way that we relate to sin. Ariel Downing of Sheridan, Wyoming says, “We are so well connected—it is easier to hurt other people by our actions. The Internet, social media, and e-mail make it easier to hurt someone because there is no face-to-face contact.”

Silvio Darco of Tucson, Arizona notes that our modern sin landscape includes not just social media, but also “failing to understand the relationship between God and creation.” Robert Irwin of Berkeley, California agrees, stating that “our sinfulness is leading us to a triple catastrophe: environmental, political, and economic.”

Similarly, Richard Placone of Palo Alto, California recognizes that in our modern world, sin manifests itself in a uniquely global fashion. If he could make one addition to the classic seven deadly sins, he writes, it would be “global marginalization of the poor through unfair economics and perpetual warfare.”

Likewise, Robert Sammon of Tarrytown, New York writes that the most serious sins facing the faithful these days are all sins that we might not have even recognized as sins 50 or 100 years ago: “capital punishment, human trafficking, and economic injustice.”

With all of the negatives floating around, you might think that people are all caught up in the bad, even if they don’t want to call it sin. But the folks responding to the survey came back again and again to the virtues that help us to counteract sin. Helene K. Langan of Schoharie, New York writes, “I think that at this time the virtue of justice should be promoted because there is such a huge need for it in the world. There are too many who are hungry, poor, and jobless. The inequality between the rich and the poor is too great.”

Catherine Sims of Mundelein, Illinois thinks that the greatest virtue that we can rely on is humility: “Having a true sense of who we are before God and in relationship to the community of humanity. We forget so easily that we are creatures of God; not like God.”

Of course for all of the attention we pay to the seven deadly sins, they cannot hold a candle to the three great virtues. Michael Nagle of Edgartown, Massachusetts says that the path away from sin and toward virtue is paved with faith. “Live in the presence of God,” he says. “If you fall, rely on the mercy of God to pick you up and heal you.”

Sally Marshall of Lake Havasu, Arizona highlights the virtue of hope, saying, “I became a Catholic for the hope it offered me and a way to still live and go on.” And then there is John Chuchman of Central Lake, Michigan, who writes of the “greatest of these”: “God is love. When I live in love, I live in God and God in me.”

Valerie DaSilva of Kingston, New York sums it up as many have before her: “Love God and love neighbor.” The rest will work itself out.

1. I’ve heard a homily about the seven deadly sins in the past year.

2. Of the seven new deadly sins that the Vatican proposed in 2008, the ones that I think should become “official” deadly sins include:

15% – Using birth control and other “bioethical violations.”
19% – Stem cell research and similar “morally dubious” experiments.
28% – Drug abuse.
53% – Polluting the environment.
58% – Contributing to the divide between the rich and the poor.
26% – Being excessively wealthy.
70% – Creating poverty.

3. I will abstain from receiving communion if I know I have committed a serious sin and haven’t yet been to confession.

Representative of “other”:
“Receiving communion makes you spiritually stronger and more aware to obtain forgiveness through confession. God is there for sinners and knows we are weak.”

5. The seven deadly sins are still a helpful guide on how to live our lives and how to treat others.

6. The seven deadly sins are outdated and in need of a rewrite by the church.

Representative of “other”:
“Maybe not a rewrite, but they should certainly be addressed from the pulpit in light of modern technology.”

7. Catholics don’t really take the idea of sin as seriously as they used to.

Representative of “other”:
“Our language about sin has changed—as it should—but we need to go further, into talking, listening, and explaining.”

Results are based on survey responses from 306 USCatholic.org visitors.