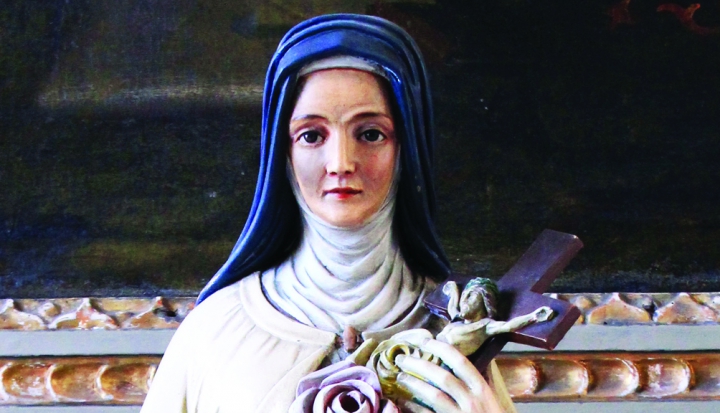 Ten years ago, when I was a 14-year-old high school student, my religion teacher arranged for me to interview Father Patrick Ahearn, a leading expert on St. Thérèse of Lisieux who happened to reside just blocks away from our school at St. Thomas More Church on the Upper East Side of Manhattan. What at the time seemed like frustrating extra work now stands out in my mind as one of the most memorable and meaningful experiences of my adolescence.

Rather than answering my questions, Father Ahearn amusingly interviewed me about life as a teenager and made no reference to St. Thérèse, except to give me a copy of her autobiography, Story of a Soul. Reflecting back 10 years later, I realize what Ahearn was really getting at and what his gift to me truly was: a saint I could grow up with.

St. Thérèse of Lisieux of the Child Jesus, also known as the Little Flower, was born in Alençon, France in 1873. She is one of the Catholic Church’s most beloved and popular saints and claims Dorothy Day, Edith Piaf, numerous popes, and other world leaders among her devotees. St. John Paul II declared her to be a doctor of the church in 1997 for her unique approach to Catholic spirituality. A basilica built in her honor is the second most visited pilgrimage site in France.

I knew these facts going into my interview with Ahearn, but after reading Story of a Soul, I realized what I had grossly underestimated and what Father Ahearn was subtly emphasizing to me: her youth. St. Thérèse of Lisieux was only 15 years old when she entered the Carmelite convent, 22 when she wrote her autobiography, and just 24 when she tragically died of tuberculosis. Although Story of a Soul is considered a great theological masterpiece, it is also just the diary of a young girl struggling with many of the same issues that trouble adolescents today, such as deciding what path to follow, encountering bullies, and experiencing suffering for the first time.

For example, Thérèse wanted to make an impact but was not sure where to begin. She felt frustrated by her circumstances, a sentiment echoed by many millennials today in our less-than-favorable economic climate.

“I should like to accomplish the most heroic deeds… I would travel to every land to preach thy name,” wrote the then 22-year-old, living in a time when many nuns did not leave the convent and medicine could not address her fatal illness. “I have always felt, in comparing myself with the saints, that I am as far removed from them as the grain of sand.”

Thérèse also wanted to be spiritual outside of formal rituals, a sentiment also echoed by millennials. She wrote that she felt that some religious traditions were too complicated for her. “I have not the courage to look through books for beautiful prayers. I only get a headache because of their number.” She even encountered bullies in the convent. “Another time I was working in the laundry, and the sister opposite, while washing handkerchiefs, repeatedly splashed me with dirty water,” writes Thérèse in Story of a Soul. “My first impulse was to draw back and wipe my face, to show the offender I should be glad if she would behave more quietly,” she writes.

To face these struggles, Thérèse wrote that anyone—no matter how powerless or small—could have a lasting effect on the world. By acting out of love and kindness in everyday deeds as Christ did, Thérèse found that anyone could be great. “Heaven was not filled with saints and Homeric figures alone,” but also with everyday people who love. She used this mantra to offer up everything as a gift to God, to turn mean girls into opportunities to turn the other cheek, to turn doubt surrounding her choice of profession into opportunities to trust in God, and even to turn her own suffering from tuberculosis into an opportunity to demonstrate her love for God.

While many millennials worry about making an impact, paying off student loans, and getting ahead in today’s economy—our generation reportedly has the highest stress and depression rates—I have found tremendous comfort in Thérèse’s idea of the “little way,” that “getting ahead” starts with everyday acts of love and kindness.

The world has grown more complicated since I was 14. As a 25-year-old woman living in Washington, in the age of social media and 24-hour work days, I find St. Thérèse’s emphasis on simplicity all the more important. It is easy to concentrate on to-do lists and to forget to pray, which also makes me turn to St. Thérèse, who wrote: “For me, prayer is a surge of the heart; it is a simple look turned toward heaven, it is a cry of recognition and of love, embracing both trial and joy.”

Although I am now an age that St. Thérèse never lived to write about, I know that Story of a Soul will still play an important role in my life for years to come. Rather than being a sort of manual for Catholicism and modern adolescence, St. Thérèse’s words will, I hope, serve as a reminder for me to retain throughout my life some part of childhood, the childlike joy and simplicity that Thérèse describes as “those early days, when pleasures were so keen, that my heart seemed too small to contain them.”

Mary Anne McElroy is a law student living in Washington.