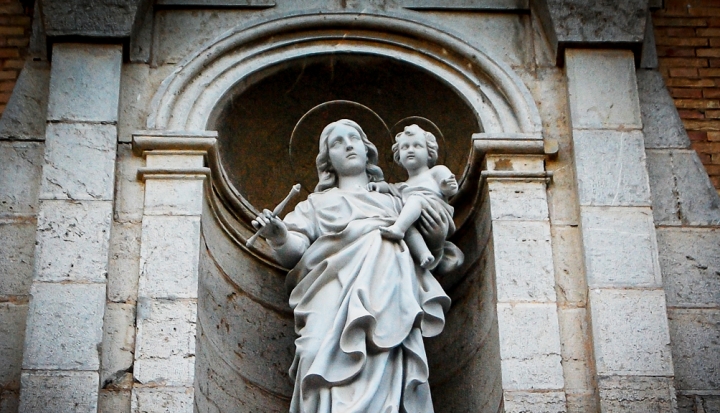 In 2005 in Chicago, a young woman was driving home from work and looked at the wall of an underpass where she saw an image of the Virgin Mary. For a short while, “Our Lady of the Underpass” became national news and a local pilgrimage site. Where some saw a miraculous image, however, others saw a mere salt stain.

Although the excitement has died down, there are still those who ensure that the underpass remains adorned with candles, flowers, and a makeshift altar. There are thousands of stories like this. Some Marian shrines become permanent pilgrimage sites, such as Lourdes and Medjugorje. Others simply fade away.

The veneration and adoration of Mary is as old as the church itself. The earliest record of Mary’s veneration probably comes from the Third Ecumenical Council at Ephesus in A.D. 431. There church fathers affirmed Mary as the Theotokos, or God-bearer. The title stuck, and today we refer to her as the “Mother of God.”

This designation of Mary as the mother of God is really at the root of Roman Catholic veneration. Mary is the link between our broken humanity and the boundless divinity present in the triune God. Mary is redeemed, as she is human, but she is also considered to have a special and unique relationship with God, as she shares DNA with Christ. Mother Teresa once remarked, “She gave Jesus his body, and his body is what saved us.”

In the many years since 431, Mary has come to occupy a powerful place in Roman Catholic spirituality. She has many faces and innumerable names, among them Our Lady of Guadalupe, She Who Ripens the Wheat, Queen of Angels, and the Light Cloud of Heavenly Rain. She is said to appear on occasion, mostly to children or others who are weak, disempowered, or on the margins of society. She is said, in some cases, to procure miracles. Some have even said that in the last days, Mary will lead the army of angels in the final battle against evil.

So when we pray the rosary, or bow our heads during the creed, we are honoring our mother, and the mother of our Lord. Although she is not God, she has earned our respect and devotion.