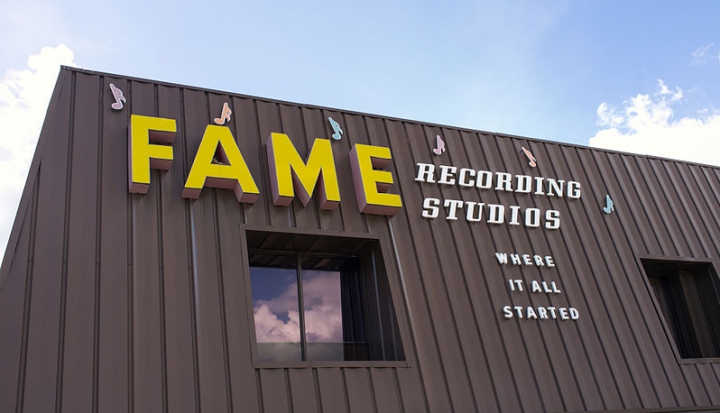 Some of America’s best-known musicians have come from its least-known places.

“I Never Loved a Man (The Way That I Love You)” by Aretha Franklin. “Land of 1,000 Dances” by Wilson Pickett. “Brown Sugar” by the Rolling Stones. “I’ll Take You There” by the Staples Singers. “Love Me Like a Rock” by Paul Simon. What do these songs all have in common? Well, they’ve all got a good beat and you can dance to them, and they were all recorded between 1965 and 1973 in the tiny Tennessee River town of Muscle Shoals, Alabama.

The mystery of how so much greatness could emerge from such an obscure location is the subject of director Greg “Freddy” Camalier’s debut documentary, Muscle Shoals, which began showing on the PBS series Independent Lens in late April.

America has always had its great urban districts where artists and intellectuals collide. But it could be argued that our Greenwich Village or North Beach were only pale imitations of their European counterparts. In fact, much of our greatest and most uniquely American art has come from the hinterland, and much of that has been made by people who seemed to have been dropped into their provincial backwaters from outer space. Think of Mark Twain in Hannibal, Missouri; Sinclair Lewis’ Sauk Centre, Minnesota; William Faulkner’s Oxford, Mississippi; Flannery O’Connor’s Milledgeville, Georgia; or Woody Guthrie in Okemah, Oklahoma.

In the 1960s and ’70s this wild American lightning struck Muscle Shoals and made that town of 8,000 into an international recording center that produced some of the greatest and most influential popular music in American history. And not only were big hits coming from this small town, but those hits were mostly the result of Southern white and African American artists working together at a time when they couldn’t dine together in a public place.

Actually, lightning struck the Muscle Shoals area twice. Sam Phillips was born there but went to Memphis, where he founded Sun Studios and worked with Howlin’ Wolf, Ike Turner, and Elvis Presley to produce the records that invented rock and roll. Then, in 1960, Rick Hall came along to start the Florence Alabama Music Enterprise (FAME) recording studio, first across the river in Florence, then later in Muscle Shoals itself.

At FAME, he assembled the core band that would play on almost all of the records named at the beginning of this column, and many more. They’ve come to be called the Swampers, a name given to them in the Lynyrd Skynyrd song “Sweet Home Alabama,” and every one of those sublimely soulful musicians was a white Alabaman. In 1969, the Swampers left FAME and started their own studio, Muscle Shoals Sound. But Hall just assembled another bunch of players (this time a bi-racial group), and tiny Muscle Shoals became home to two major hit-making operations.

The rift between Hall and his original band provides a narrative arc for Camalier’s film. Each of the players in the conflict is interviewed individually, and all the old grievances are aired until finally, at the end, the Swampers are back in the studio, with Rick Hall at the board, cutting a session with Alicia Keys that becomes a ceremony of healing.

In addition to the session men and producers at the Muscle Shoals studios, Camalier interviews many of the artists who came there to record. These include Aretha Franklin, Clarence Carter, Jimmy Cliff, Wilson Pickett (before his death in 2006), Mick Jagger, and Keith Richards. Greg Allman is in the film, standing in for his late brother, Duane, who was a Muscle Shoals session man pre-Allman Brothers Band. And there’s lots of thrilling period footage of Muscle Shoals-identified artists in performance, including a clip of the Rolling Stones at work in the Muscle Shoals Sound studio in 1969.

These talking and singing heads are interspersed with long, loving shots of the Tennessee River and the surrounding hills and forests. In fact, Camalier presents a sort of neo-animistic theory about the relationship between Muscle Shoals’ sound and its landscape that is derived from the local native people’s name for the Tennessee River. To them it was “the singing river,” and they believed it to be inhabited by a female spirit that brought music to the land. When you consider what happened at Muscle Shoals in the ’60s, this explanation is as likely as any.

Of course, the Tennessee River wasn’t singing very much by the time Rick Hall came along. President Roosevelt’s Tennessee Valley Authority dammed the river to produce electricity and economic development for the rural mid-South. Today it is a wide, slow-moving body of water that periodically broadens out into man-made lakes. But it is still the source of North Alabama’s livelihood and spirit.

Muscle Shoals tells an essential American story because it is part of the great American story about race that lies at the heart of our identity and our deepest contradictions. The musicians of Muscle Shoals were not crusaders; they were just musicians. But, by simply following their muse as artists, they blew past 300 years of bad history and helped to create the future. In fact, in 2014, we’re still trying to become a multiracial nation worthy of our Muscle Shoals sound.