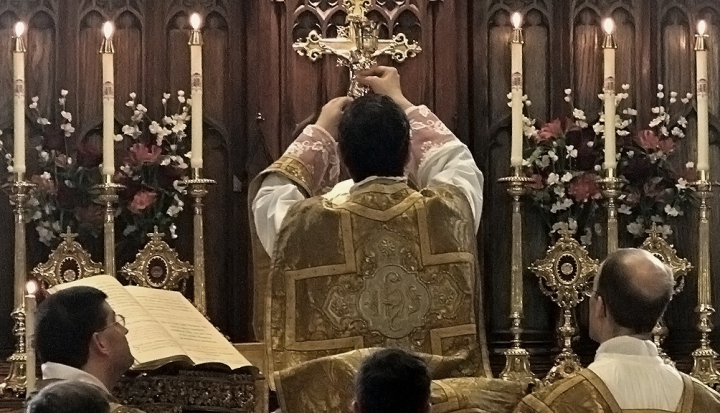 Rather than handing down bishops from on high, the church should listen to those on the ground when choosing its leaders.

Pope Francis says that he wants a special kind of bishop for our church—he wants “shepherds who smell of their sheep.” Let us take our Holy Father at his word: Who knows how the sheep smell better than the sheep themselves? No one. So then why not let the sheep make a modest proposal and ask that we laypeople have a significant say in the choice of our bishops?

This proposal is not as radical as it may seem at first glance. Once the office of bishop was clearly established in the early church, that office was filled by the choice of the local people and priests, and ratified by the neighboring bishops as a sign of the unity of the church. Even unbaptized persons were eligible to be chosen for bishop, as we know from the story of St. Ambrose, who was acclaimed by the clergy and people as bishop of Milan while he was still a catechumen. And the very first bishop in the United States, John Carroll, was elected by the priests of Maryland and confirmed by the pope.

Today we are so used to the pope choosing our bishops for us without any input from those whom the bishop will serve that we forget it was not always that way. In fact the right of the pope to choose bishops was only finally settled by the 1917 Code of Canon Law, which clearly allocated that power to the holder of the papal office.

The way bishops are chosen today arguably does have some limited lay input. When a priest is being considered for appointment as bishop, the apostolic nuncio—the pope’s representative to the United States—sends out what are called apostolic letters. These letters go to select laypeople from the diocese, asking their knowledge of the candidate’s position on some very specific issues, such as birth control, abortion, married priests, female priests, the remarriage of divorced Catholics, and same-sex marriage.

These questions reveal the slant of the Vatican that has given us so many “culture warrior” bishops, although perhaps the questions will change under Pope Francis. Maybe the apostolic letters will begin to ask new questions: Does this man have a concern for the poor? Does he dress in the best clothes, drive a fancy car, and enjoy fine food and drink? Does he spend more time with rich people than with poor people? Even better, the letters might possibly go to different people. Right now, the only folks who get those letters tend to be wealthy donors; the poor people of a diocese never get apostolic letters from the papal nuncio. Besides the limited input of such apostolic letters, however, there really is no lay participation regarding which men are chosen to be our bishops.

So then how do bishops come to be chosen today? Dioceses in the United States are divided into what are known as “ecclesiastical provinces.” For example, every diocese in the state of Illinois is in the province of Chicago, every diocese in the state of Pennsylvania is in the province of Philadelphia, and so on. Each of these provinces has a list of potential candidates for bishop, compiled from suggestions of priests favored by the bishops of that province, which they update every so often. No laypeople are given the chance to contribute any names to that list.

Supposedly, when there is a need for a diocesan bishop in the province, the papal nuncio begins the hunt by looking at the candidates on that list. And even more importantly, the papal nuncio is not bound by the list; it is only a starting point. He may place other names of priests from around the country on the list of candidates that he prepares.

The nuncio narrows the candidates down to a final list of three names which is sent to the Congregation for Bishops in Rome. The list is vetted, perhaps rewritten with different names, and then sent on to the pope. The pope can pick any name from the list of three that the Congregation for Bishops gives him, or he can go off-list and pick someone completely different. John Paul II, who was well-traveled both before and after becoming pope, supposedly went off-list a number of times to name as diocesan bishops men whom he knew personally.

This current system can result in bishops being parachuted into dioceses by headquarters in Rome, without any knowledge of the diocese, its priests, or its people. Sometimes that works out, sometimes it doesn’t. Some bishops from outside are quick studies and genuinely get to know their priests and people before they begin making major decisions. Others arrive thinking that they already know all they need to know and proceed from one disastrous decision to another. Usually this system gives us bishops whose only loyalty is upward—to their patrons in Rome or to the national hierarchy who campaigned for them—and not to their own priests and people.

I think that this one fact alone—the way they were chosen as bishops to begin with—helps to explain a lot about the way the American bishops mishandled the clergy child sexual abuse crisis. Recall that the national bishops conference dithered for years, looking for a solution from Rome. Being afraid to act without one, they did nothing while the situation deteriorated in the United States. Bishops who were more accountable to their people would not have acted this way.

What would it look like if laypeople had a real role in the choice of our bishops? In the normal course of events, before a diocese is about to fall vacant—and this is not a surprise date since bishops must retire when they turn 75, which is right after the year they turn 74—the papal nuncio or someone from his staff should actually travel to the diocese and talk to the laypeople directly. In any given year, there are fewer than a dozen dioceses that become open, so this would not require a lot of travel. The nuncio’s staff should visit parishes and ask people to stay after Mass to talk about potential bishop candidates; that way you would get those Catholics who actually participate in the life of the church (anywhere from 27 to 35 percent in most dioceses) to give their opinion.

The nuncio or his staff should then hold a convocation in the diocese where folks chosen by the people of each parish, not by the pastor, would be asked to attend and discuss suitable candidates. The people know who the good priests are. They are the men who Pope Francis described in his recent talk to the episcopal conferences of Latin America (CELAM) as “pastors, close to people, fathers and brothers, and gentle, patient, and merciful.” They must be simple men, devoted to poverty, and not driven by ambition. They must be “men who do not think and behave like princes,” Francis said, but “men capable of watching over the flock entrusted to them and protecting everything that keeps it together: guarding their people out of concern for the dangers which could threaten them, but above all instilling hope: so that light will shine in people’s hearts. Men capable of supporting with love and patience God’s dealings with his people.”

Let the people tell the nuncio or his staff in a convocation who these kinds of priests are. They know. And having heard the people of the diocese, the nuncio can then compose his list for Rome, which should be a public list so that the people will know whether they were heard or not.

Some will say this leaves the episcopal office open to campaigning among the laity, and priests should not be able to campaign to be bishop—it is unseemly. Reality alert: Priests already do campaign to become bishops; the laity just do not know about it. Priests campaign with their bishop friends to get on the provincial list. They campaign with the papal nuncio to get on the list of three names sent to Rome, usually with the help of affluent donors who have direct access to the nuncio. There are even stories of the head of a wealthy Catholic fraternal organization carrying the names of priest friends to Rome for advancement.

And it does not stop there. Cardinal Bernardin Gantin, the head of the Congregation for Bishops from 1984–1998, said after leaving office that he was amazed at the bishops who, having just been named to a diocese, would travel to Rome to lobby him for a bigger diocese. This practice gave rise to the phrase “starter diocese” among certain circles in Rome.

So campaigning for the office of bishop by priests does occur. Wouldn’t it better if this were all out in the open—if laypeople knew about it and participated in the process? Indeed, the laity seeing a priest desperate to become a bishop might just consider such ambition, as would Pope Francis, a disqualifying factor. But the sheep do know who the right men are for the job, and the church would be better off with the bishops we get if we were consulted in the process.

1. The pope and other church leaders are in a position to know more about the pros and cons of potential candidates for bishop than the average layperson.

Representative of “other”:
“They are both essential. The hierarchy must evaluate from their vantage point, but to get the full appreciation they need to see how these individuals are perceived on the ground.“

2. Reasons that should disqualify a priest from bishop consideration are:

Representative of “other”:
“Lack of a servant attitude. A bishop is to serve his people, not just rule them.”

3. I think if bishops were chosen with more input from laypeople, they would be more responsive to the concerns of laypeople in their diocese.

4. Because a bishop must sometimes take unpopular or countercultural stances in favor of church teachings or positions, anything like an “election” would tend to weed out the most prophetic.

Representative of “other”:
“Maybe, but hopefully the discernment for leadership will be taken with all sincerity and an authentic listening to the Spirit.”

5. Experiences that I would consider essential for a candidate for bishop include:

91% – Serving as a full- time parish priest and/or pastor.
81% – Direct service to the poor.
42% – Having served on committees or councils at the local, state, or national level.
28% – Being an administrator at the diocesan level.
14% – Involvement in pro-life activities.
4% – Having spent a significant amount of time working or studying in Rome.

6. A bishop should never be named to head a diocese that he hasn’t spent at least some time ministering in.