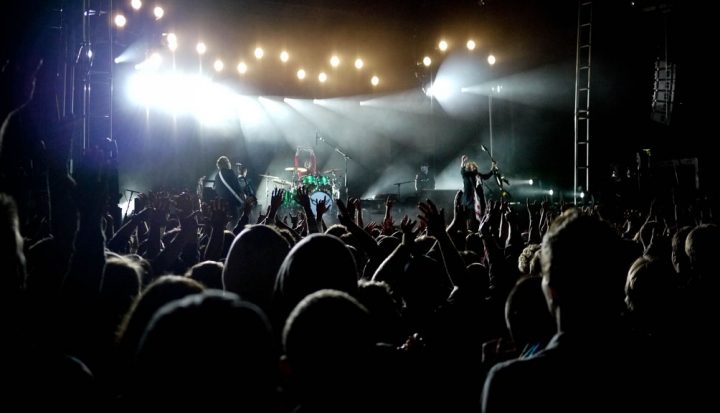 Can you enjoy a song or movie without supporting the person who created it? Let your conscience be your guide.

Last summer I found myself in a Twitter debate with the well-respected music critic and writer Jessica Hopper. The Pitchfork Music Festival in Chicago had just ended, with Chicago native and R&B legend R. Kelly closing the Sunday lineup, essentially headlining the entire three-day festival. It was a controversial appearance given Kelly’s alleged history of sexually predatory behavior and the close proximity of the festival to the homes of many of his accusers. To his critics, it seemed as if Pitchfork’s organizers and attendees that night were not only approving of Kelly, but doing so in mere walking distance from where several of his accusers live.

Hopper covers artists who might not fit mainstream sensibilities, and when her subject is a Taylor Swift or Lorde, she examines not just whether the music is appealing but how the acts can or can’t speak to and for teens and young women.

I was shocked then when I saw a tweet from Hopper that referenced her feminist perspective, emphasized how much she “LOVED” the performance, as well as claimed she hasn’t financially supported Kelly since he was accused of sex with minors. Without thinking, I immediately tweeted back, “Your word is support. What r u saying to the young women who look up to you? No to rape culture unless rapist puts on a good show?”

I use the term “rape culture” because Hopper herself often uses the expression in her writing to reference the cultural climate which not only tends to listen more attentively to the side of accused rapists and abusers over the victims of sexual assault and rape, but also often implies that women somehow invite predatory sexual attention, because “boys will be boys.” I thought it was disingenuous for a woman with a fairly large Twitter following, especially of girls around the same age of Kelly’s accusers, to emphasize publicly how much she enjoyed the show.

Our back and forth conversation—limited to 140 characters per tweet—stalled at the question of whether or not it’s necessary to separate the consumption of art from knowledge of the artist’s personal character and behavior. Hopper tweeted that being a feminist and music lover is complicated, and occasionally you have to draw a truce between the art and artist. For me, given the nature of Kelly’s art (his songs are about sex, which numerous witness statements claim is even part of the making of his albums), this wasn’t a complicated case. I can’t draw such a truce.

Whether or not we ought to consider the artist when consuming art is a question that another journalist, former Chicago Sun-Times music critic Jim DeRogatis—who has been covering the allegations and legal proceedings against Kelly for 14 years—asked repeatedly in a series of interviews and articles called the Kelly Diaries for WBEZ radio in Chicago, which came out in the weeks leading up to Pitchfork. (In the interest of full disclosure, my husband worked with DeRogatis on the series.) Unfortunately, DeRogatis’ work was largely ignored, even after a recent change in attitudes among the music community, Hopper included, toward Kelly after Hopper interviewed DeRogatis for the Village Voice.

Citing a private conversation with DeRogatis about the victims he’d gotten to know and the realization of her role model status for young women, Hopper decided that it was important she join DeRogatis in publicly taking a stand against Kelly. Following her lead, many other pop culture critics and commentators also changed their perspective, several of whom wrote essays about why they weren’t going to listen to Kelly anymore.

When Woody Allen received the Cecil B. DeMille Award at the Golden Globes in January for lifetime achievement, the question “Should we consume art made by bad people?” rose again. Allen’s daughter with Mia Farrow, Dylan, accused Allen of sexual abuse when she was 7 years old, a scandal most fans had either forgotten about or never even knew of until Mia Farrow and her son tweeted their disgust during the awards show this year.

Since then, the conversation has largely focused on Allen’s guilt or innocence and whether or not society should presume that the accuser or accused is telling the truth. That’s an important question, one that eventually should lead Allen’s fans to ponder what it means to enjoy his films given the cloud that surrounds them. Like Kelly, Allen has only been accused, but never convicted, of sex crimes and likely never will be. The fixation on his innocence or guilt may ultimately be futile, but not the consideration of how or if we can ever enjoy Manhattan again, or see this year’s Oscar-nominated Blue Jasmine.

The list of artists whose work is under similar clouds is unfortunately long. Off the top of my head, I can name at least four more: James Brown, Roman Polanski, Chris Brown, and Michael Jackson. I’d be lying if I said I didn’t enjoy the work of each, and the decision whether or not to consume or support, whether financially or in my writing, is not easy. Of course, it’s easier to boycott and just ignore the art made by sexual predators. What about when an artist is said to be connected to causes we find morally repugnant, such as composer Richard Wagner with Nazism or author Rudyard Kipling with anti-Irish sentiment?

Art is enjoyable, and having to consult my values every time I consume can be exhausting. Indeed, getting overly moralistic about consumption of anything can be downright paralyzing. But as Catholics, we are asked to consider the impact of our choices in matters of food, where we live, and what clothes we buy, so why not art as well?

As DeRogatis wrote in the Village Voice earlier this year: “Why? Because art matters. Because criticism and context matter. Because crimes against women and children matter. And because the conversation matters. It’s about time we had it.”