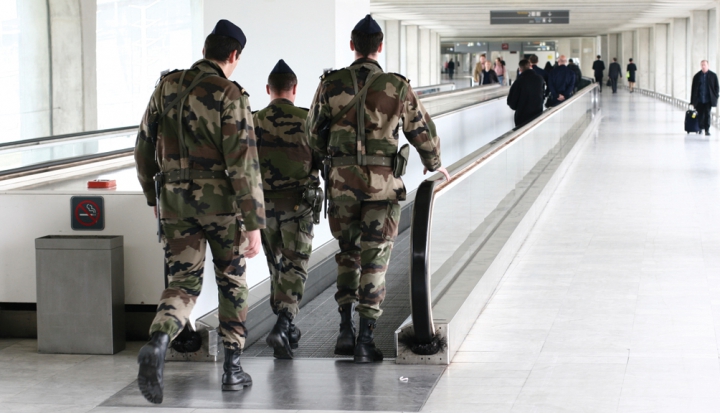 Peace activist John Dear’s departure from the Jesuits calls to mind our need for modern prophets.

On a recent trip from Chicago to Charlotte, North Carolina, I was intrigued to discover in that Southern airport a curious opportunity: While at the newsstand I was invited to “buy a snack for our troops.” The “snack,” a selection of candy and chips (and even earphones), was promised to be delivered to “our heroes” if I purchased one. I chalked it up to another sign of the militarization of our culture, of which I’m reminded every time I see military-style camouflage on infant clothing at the local Target.

I soon remembered that on this short trip, I’d seen ranks of young men and women in both airports in uniform, some carrying military-issue camouflage duffel bags. When I see them, I am always reminded of the peace activist John Dear, until recently a Jesuit priest, who lamented in an interview with U.S. Catholic some years ago that one of the few options for advancement that our culture provides to poor young people is military service.

Dear’s dismissal (at his request) from the Society of Jesus in January coincided with my trip, so perhaps I was a little more sensitive to the way our country’s defensive infrastructure invades our daily lives. It also wasn’t lost on me that at the same time Congress was passing a bill that restored sequester cuts to the Pentagon budget—earmarking $30 billion more for the military than for “domestic programs”—while it failed to extend unemployment benefits and made major cuts to food stamps as well, a sure sign of our nation’s priorities.

Dear, long an ardent critic of our nation’s preferential option for war, found himself outside the Society of Jesus primarily, as he tells it, because of his peace work. In an article in the National Catholic Reporter, he claims that his Jesuit superior told him the Society “no longer advocates for justice or works for justice.” In turn, Religion News Service’s David Gibson quotes church sources saying that the Jesuits had tried to find ways to allow Dear to continue his peace ministry and had spent years urging him to “fulfill the communal responsibilities expected of all Jesuits.” Several Jesuits also told Gibson that the charge that the Jesuits had abandoned their work for justice was unfounded, pointing to the order’s many social justice efforts—think of the Jesuit Volunteer Corps or Jesuit Refugee Service, for example.

As in any divorce, it is hard for outsiders to discern the whole story, nor do we need to know it. It is nevertheless unfortunate that a voice for peacemaking such as Dear’s now speaks outside the religious community that once supported it. Many religious communities have had to prioritize their ministries due to declining numbers, and while we don’t really know if that is a factor in Dear’s case, it’s too bad that Dear and the Society couldn’t hammer out a way for him to stay a Jesuit and also work for peace.

Like any prophet, Dear saw his cause as a black-and-white issue, and his with-me-or-against-me rhetoric made no room for compromise. That no doubt alienated many Catholics in the military and got Dear removed from ministry in the Archdiocese of Santa Fe, New Mexico, where he railed against the nuclear facility in Los Alamos. Yet, in a culture that glorifies war not only in military air shows and budget-busting weapons systems but also less obviously in video games and merchandising, the church and the world need his witness.

There was a time when religious communities could afford a “tithe” of some of their members for prophetic work; I remember being impressed by the Sisters of Notre Dame de Namur, who subsidized a ministry with men experiencing homelessness created by one of their members. Sister Therese’s work brought in no salary to care for the sisters’ aging membership, but it did promote in a prophetic way the mission of the gospel.

In Dear’s case, this arrangement is regrettably no longer an option, but perhaps it will serve as further encouragement to the rest of us baptized to take up his work of nonviolent peacemaking in our own way.