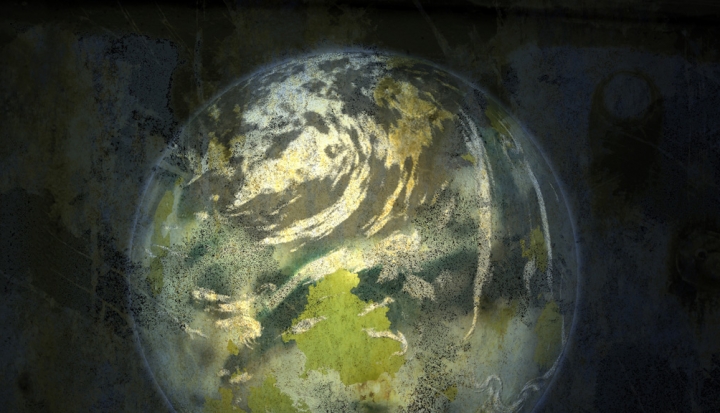 Movies can help us find perspective on our own existence by taking us to infinity and beyond.

Hollywood and the film industry have been called many things, including the “dream factory.” Hollywood’s constructed dreams are there for us to see and hear, and for better or for worse they engage our inner world of the imagination. Just as films make invisible realities visible, they give flesh to a person’s subconscious and conscious hopes and desires. If they are effective, narrative fictional films, as well as documentaries, tell stories that engage the human imagination on so many levels: moral, ethical, scientific, spiritual, Catholic, and more. What you bring to the movie—your age, interests, beliefs, life experience, values, and expectations—largely determines what the movie will mean to you.

Science fiction provides a huge landscape for filmmakers to image other worlds, to go where no one has gone before, to escape an undesirable reality for another for reasons beyond curiosity. In 1902 French filmmaker Georges Méliès made the first science fiction film Le Voyage Dans La Lune, or A Trip to the Moon. Méliès didn’t go very far from earth, as contemporary cinema often does. His story is told in the 2011 Oscar-winning film Hugo (based on the Brian Selznick’s award-winning novel The Invention of Hugo Cabret), where we learn that early theatergoers did not appreciate Méliès’ imagining of what a voyage to the moon, never mind the solar system, would be like. They preferred realism.

Georges Méliès’ film, which can be found on YouTube, was a flight of sheer fancy, sequence after sequence of cause and effect with a happy ending for the voyagers. But as I watch the panorama of films about other worlds that appear in theaters today, the moon is not enough, and fantasy films have taken on an aura of gloomy reality.

Beginning with the surprisingly dark animated film WALL-E from Disney/Pixar in 2008, Hollywood began leaving earth behind. In Wall-E, humans had trashed the planet, and corporations had violated the environment with toxic chemicals and used up Earth’s resources. Humans didn’t bother with finding another planet to exploit; they just hopped on a gigantic spaceship to cruise in comfort for who knew how long. Well, until a cute little robot found something green.

In Upside Down (2012), a French-Canadian film directed by Juan Diego Solanas, Adam (Jim Sturgess) and Eden (Kirsten Dunst) live in the future, on worlds that are twinned; Eden lives above and Adam below. They had met as children and became friends even as gravity pulls them apart. The only connection between the worlds is an office building/pipeline for a company that extracts oil from the impoverished and wrecked world below to make the world above flourish.

Upside Down is a love story and social commentary that highlights friendship, community, environment, and economy. Against the romance of hope, it is about the corporation usurping the role of government and the dominance of oil in the economy of one world just as it sucks the life out of another.

This summer, Elysium (2013) saw Matt Damon as Max, an ex-con who was raised in a Catholic orphanage. A nun once told him that he had an important purpose in life, but in the over-populated, diseased, and decayed ruins of Los Angeles in 2154, he is not yet a hero. When Max is zapped with radiation, the only place he can find healing is on a luxury space station that orbits the earth and continues to extract its resources to maintain the privileged lifestyle of the wealthy. Neill Blomkamp, who also gave us District 9, the bold science fiction thriller about racism, speculates here about the alien class created by unfettered wealth. The oppressed, stuck in a world ever more hostile, want the world the rich have created for themselves, as a Christ figure paves the way.

Tucked in among more serious films about the consequences for humanity of neglecting the environment, cleverly masquerading as entertainment, was the small 2011 film Another Earth. It is not about the neglect of the earth, but rather the soul and suffering of the human spirit. Almost like a conscience, a world mirroring our own is visible from Earth. It is a special place, almost like heaven, where the dream of  “What if I could do it over?” can come true. A young woman (Brit Marling) is devastated by guilt for causing the deaths of a mother and child, and after years in prison she finds a way for the father to be reunited with them. Of all the films imagining other worlds, this one touched me the most.

Hollywood dreams are becoming nightmares in these alternative realities imagined by filmmakers. These other worlds, and the inner and outer worlds of human life and experience, can make for powerful storytelling that imagines consequences of human activity on the only world that we have. These films can engage the imagination if we are willing to suspend disbelief long enough to discern the truths they reveal—truths that often continue to be inconvenient.

A writer friend of mine, John Wallbank, speculated about why filmmakers feel the need to imagine other worlds: “It’s like Jesus’ parables. Those who are receptive can understand them, and their implications are vast in both implication and application. Those who are not ready to accept the deeper meaning are still entertained with an interesting story.”