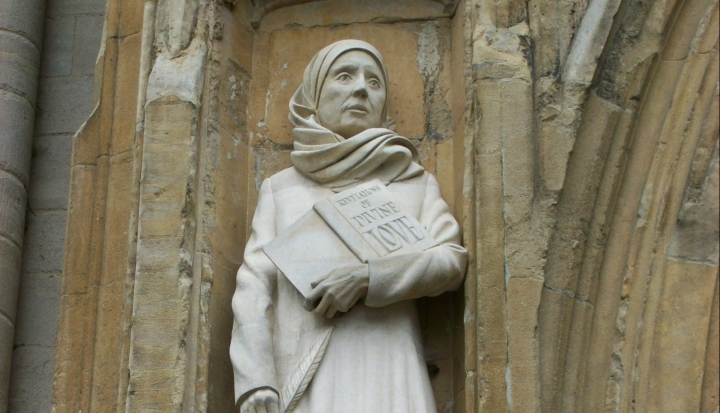 After spending 20 years meditating on a number of visions, Julian of Norwich developed a deep understanding of God and produced her famous work, Revelations of Divine Love. Through her words, one can see the fruits of contemplative meditation.

While interviewing Father William Meninger on the topic of contemplative meditation for our November 2013 issue, we asked him what else we might learn from this 14th-century woman’s writings.

Two of your latest books are about Julian of Norwich. Could you tell us about her?

Julian of Norwich was one of the most remarkable mystics ever to grace the English church. She lived in the 14th century during a time of incredible turmoil. She was a hermit or a recluse, living in a cell abutting the church of St. Julian in Norwich. In a period of one day she had a series of 16 visions which she meditated on for 20 years and then finally wrote a finished account of them called Revelations of Divine Love.

During those 20 years she went from being Julian the visionary to Julian the theologian. Her contemplative theological reflections represent the cutting edge of the advanced understanding of God and humans that the Holy Spirit is working in the church. I would say she belongs in the 22nd century. I was recently very much surprised to discovera talk that Pope Benedict gave about Julian in a December 2010 general audience. He speaks of her with the highest praise and without any reservations for what some would consider her avant garde theological reflections. She has never been canonized by the Catholic Church, for whatever reasons. The Anglican church does acknowledge her as a saint, which the pope mentions with seeming approval.

Anyway, Julian’s manuscript was sort of lost. It wasn’t completely lost–there were some who knew of it, and, as a matter of fact, one of the great things for which she’s known in England is that she’s the first woman who was published by the printing press, in the early 1500s, after she had died. The manuscript was rediscovered in the British Museum about 100 years ago. It was written in Middle English, around the same time and in the same language as The Cloud of Unknowing.

Then Julian’s manuscript started to grow in popularity, much of it through the Anglican church. I always tell Anglicans, “Look, Julian was a religious. She was a nun from the 14th century, so she was a holy Roman Catholic. Let’s get this straight.” They’d be looking at me. Then I’d say, “But after she died, she became an Episcopalian.” But the Anglicans really are the ones who have brought Julian to the world. I think it’s wonderful that they’ve done that.

How can she be a spiritual guide for people today?

Julian is the most remarkable human being who has ever lived. The time that she lived was the pits. She lived through three attacks of the bubonic plague–she saw nearly half of Norwich die from the plague. Before she was 20, a king was assassinated. The Archbishop of Canterbury was assassinated. There were three popes fighting each other for the papal throne during her lifetime. England had its first heresy. Her bishop was a vicious persecutor of the Lollard heresy who tortured people to death.

This was all going on in her lifetime. She doesn’t mention a word of it in her writing. But if you know this, you can see the influence of it between the lines.

Julian was not a Pollyanna. She was very conscious of suffering, because she had experienced it in her life. She had to have had family members who died in the plague. And yet all she could see was the love of God in those 16 visions that she had. Jesus said to Julian: “Julian, all shall be well. Everything will be well. You will see for yourself that all manner of things will be well.” Julian insists that she was not the person Jesus was taking to. She says, “He was talking to you,” meaning what she calls her “even Christians,” or her fellow Christians.

Doesn’t Julian have some interesting images of God as feminine?

Julian was not a feminist. She would be horrified at the word. But Julian sees the maternal qualities of God. Naturally, any woman should. She speaks of Jesus as a “she.” Not the Father as the Mother, not the Holy Spirit, which early church saw as “she.” But Jesus as “she,” because he evidences the maternal qualities of giving birth—he does that in baptism. Of nourishing, which he does in the Eucharist. Of teaching, instructing, guiding. These are all the qualities of a woman.

God manifests feminine qualities. It wasn’t unheard of in the church to mention this—Julian was not the first, but no one did it as masterfully as Julian. She’s just amazing.

What other insights does Julian offer?

There’s her understanding of the Trinity. I remember, in the seminary, taking a six-month course on the Trinity. I got an A‑plus. If you had asked me what I had learned, which nobody bothered to do, I would have said, “It gave me a glimpse of what God looked like behind the curtain when he’s taking a shower. That’s the Trinity.” What does that mean? Absolutely nothing.

But Julian taught me what it really meant. She ends her book Revelations of Divine Love with the fact that Christ dwells within. But she says that we are the city in which God dwells. Where Christ is, there is the Father and the Holy Spirit. At the same time, Christ is the word. So Christ brings me into the heart of the Trinity. The Trinity dwells in me, and I dwell in the Trinity. Everything is Trinitarian, all of life is. She’s wonderful for that.

Then there’s her idea of God. She says, “The greater your sins, the more honor you will have in heaven.” Some bishops would hold it today to be heretical, but it’s not, because God is not a punisher. God is not a judge. She evinces people like St. Peter, and so forth, those who have sinned greatly but who have loved even more greatly. There will be more joy in heaven over one sinner who repents than over 99 who have no need of it. She’s very scriptural, very positive. We don’t bring these things up enough.

Julian sees these things in such a beautiful, marvelous way. She is such a loving human being and a lover of human beings. Julian doesn’t teach contemplative meditation; that’s not her purpose in writing. But she teaches the fruits of it in one’s life. You can see it in her book: Everything is a grace. That’s really Julian’s teaching, too.

This is a web-only sidebar that accompanies the article, “Sit down and be quiet: How to practice contemplative meditation,” that appeared in the November 2013 issue of U.S. Catholic (Vol. 78, No. 11, pages 18-22).