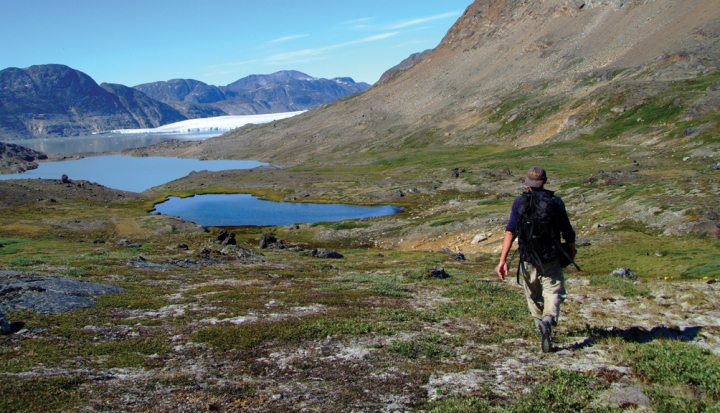 There’s something appropriate about turning 40 in a place where you might get eaten by a grizzly.

The mountains don’t care about you,” says the forest ranger, having just finished his bear-safety talk for probably the third time that day. In case you don’t already know: Hang your food at night; only prepare meals in designated areas; and whatever you do, do not run from a bear (it activates the chasing instinct). These are rules to live by in the wilds of backcountry Montana, where one should also be on the lookout for mountain lions—far less predictable than grizzly bears.

It is said that the Italian St. Bruno converted a particularly cantankerous bear and that St. Francis tamed a child-snatching wolf—heroic sanctity to which I have never aspired, and certainly not as I begin my fifth decade in the precincts of those mountain carnivores. Given that my last 10 years have found me twice in the hospital with life-threatening illnesses and two other times for knee repairs, I find myself treading cautiously past my 40th birthday, definitely showing a little wear and tear.

Yet the backcountry beckons, daring me to take my chances with Mother Nature and her other children, if only for a week or so. The mountains of Glacier National Park may not care about me, but we share the same maker, who cares about us both, if the biblical story can be believed. “Fearfully and wonderfully made,” Psalm 139 calls us—though given the wild, hungry things in these mountains it’s hard to tell whether fear or wonder will win out. Regardless, it seems too early to give up on adventure.

Then again, maybe there is something to the fear of being eaten—or maybe getting older makes the idea a little less fearful. We are all eventually going to be “eaten” anyway, digested back into the earth from which we were made. We may be children of God, but our atoms were all forged in stellar furnaces, belched in supernovae, and deposited in this rocky clump of a planet. Here we inhabit a fragile ecosystem that could blow away on the next solar wind.

I once thought that getting older was about getting bigger; my mother tells me that on my fifth birthday I ran to the bathroom mirror to see what “5” looked like. I’m beginning to wonder, though, if getting older isn’t more about growing smaller, discovering just how delicate and fragile life is—and me within it—before the staggering power and grandeur of the universe. Given the cosmic explosion that started it all, it’s a wonder there is anything so delicate as a mountain wildflower or as astonishingly complex as a human being.

“Aslan, you’re bigger,” says Lucy in another mountain forest, this one fictional, in C. S. Lewis’ Prince Caspian, a childhood favorite of mine. “That is because you are older, little one,” answers Lewis’ leonine stand-in for the divine. “Not because you are?” Lucy asks. “I am not,” says Aslan. “But every year you grow, you will find me bigger.” At age 8 I’m not sure I quite understood what that exchange was all about; to my 40-year-old eyes, though, God seems bigger than ever.

I once thought Lewis’ invitation to “come further up and further in” in the last of his Chronicles of Narnia, The Last Battle, had something to do with the afterlife, coming as it did after the destruction of Narnia. Now I suspect it is more about the present life, or maybe both. I suppose I could ask my paternal grandfather, who turned 100 this past April, or my maternal grandmother, who became a centenarian in July. They were both already 60 years on their way “up and in” when I was born. Now they are both much diminished by long years, much “smaller,” and yet they seem no less wondrous to me than the mountains that surround me.

As my feet carefully walk the backcountry trails, I will remember those of my grandmother, which carry her ever so gingerly from her chair to her bed, and of my grandfather, which still hike a daily lap around his retirement home. Each of us, and all of us, are climbing further up and further in, as the mystery gets bigger and bigger before us.