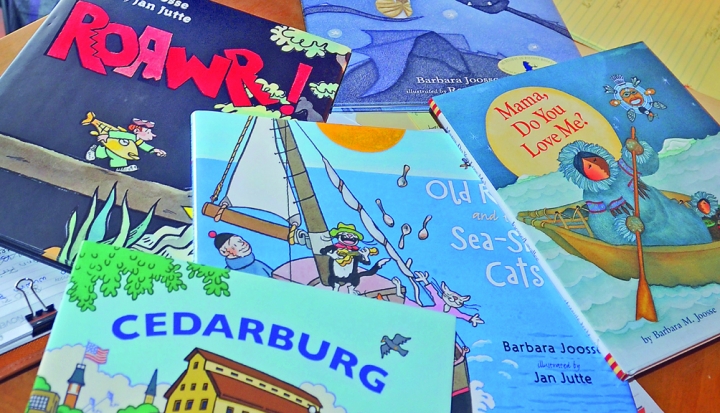 Author Barbara Joosse sees the world through the eyes of a child.

As a precocious and active youth in a small Wisconsin town, Barbara Joosse often spent her summers writing and staging dramatic productions for her younger siblings and playmates. She didn’t have many books of her own as a child, so Joosse was content to tap into what she now calls a “rich territory within myself,” using her imagination to craft her own stories, often with herself as the star. “I was so bossy,” she laughs.

Today Joosse, a 64-year-old mother of three and grandmother of three, still spends much of her time immersed in a child’s point of view. The renowned author has written 44 picture books for children, including the best-selling Mama, Do You Love Me? (Chronicle), the story of an Inuit child from the Arctic who questions her mother’s love in a variety of circumstances. A companion book, Papa, Do You Love Me? (Chronicle), is set among the Maasai people in Africa. Other books transport readers to many different places around the globe, always providing a steady pulse of reassurance from parents, grandparents, pets, and the natural world.

Despite her creative childhood endeavors, Joosse had not planned on becoming a children’s book author. She had considered becoming a nurse, and at age 7 she wanted to be a nun—even acting out the part by draping a towel around her head and shoulders and calling herself “Sister Holiness.” After college she briefly went to work in advertising, which she now says was excellent preparation for writing children’s books because it taught her to think visually.

Following the loss of her first child, born prematurely, Joosse quit her job and stayed home to focus on raising a family. She began writing and told herself she wouldn’t quit for two years. In that time she published her first book, The Thinking Place (Random House), inspired by her eldest daughter.

Writing for children seemed like a natural direction. “I knew I was very good at writing,” says Joosse. “And I was more comfortable in a kid’s world than anywhere.”

While her writing career flourished, Joosse faced a deep depression as her first marriage began to fall apart. Years earlier she had become disconnected from the Catholic Church after a priest advised her to lie to her
non-Catholic husband about using birth control pills, encouraging her to flush them down the toilet instead. To Joosse, lying to her spouse was just as serious a matter as using birth control, and she couldn’t reconcile the conflict.

Faith had always been a serious matter to Joosse, who recognized within herself an “inner stillness” since childhood that she attributes to God’s grace—a stillness she now sees in her granddaughter Lucia. Joosse describes it as a state of well-being, one that wasn’t dependent on the things the church stressed as being important to one’s spiritual health, such as how many Our Fathers or Hail Marys she said.

Joosse recalls thinking as a child that adults around her often had “silly rules,” especially in the church. Only one rule really mattered, Joosse believed: being kind to others.

Her memories of attending Mass at St. Joseph Parish in Grafton, Wisconsin in the 1950s illustrate what she considers to be the nonsensical way many children experienced the church in those days. Overheated in winter clothing, weak with hunger from fasting before communion, and sickened by the cloying haze of incense, Joosse would often keel over. “I was a fainter,” she says. “Other kids were pukers.”

The baptism of her niece brought Joosse back inside a Catholic church for the first time in many years. While sitting in the pews she was overcome with the feeling that God was reaching out to her and had never left her throughout her struggle.

“I believe I had internalized the beauty of the church so deeply that it could not be separated from me, even when I had separated from the church,” she says. “Because I’m an intuitive person, I believe I was always receptive to God’s nudging. I just couldn’t trust his warmth, not until the moment I gave up fighting him off.”

Joosse began meeting with her local parish priest to start the process of reconnecting with the church. Though her first marriage ended, she eventually remarried and has settled down in a small town cottage filled with light and art, surrounded by her large garden. Avoiding negativity in her environment and nurturing the life around her are key components of being able to craft children’s stories, she says.

Joosse points to her rekindled faith as a turning point in her writing, as weaving a message of God’s love through others into her writing has produced some of her most successful works. “This was no longer a personal mission, but a faith mission,” she says.

“My books are more confident and courageous after that moment,” says Joosse of her return to the church. “I am God’s soldier, and the enemy I battle is complacency and meanness.”

TagsBooks and literature In Person