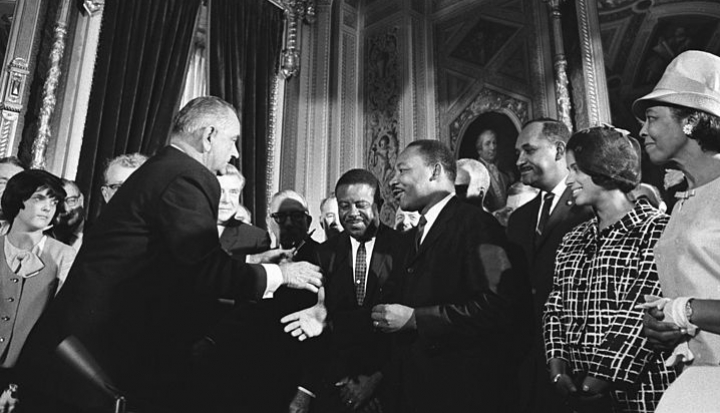 1865–The 13th Amendment formally and officially abolished slavery. The Emancipation Proclamation, while commonly understood to mark the end of slavery, did not actually make the practice illegal. Instead, the Emancipation Proclamation freed the slaves in the 10 states that were in rebellion. The 13th Amendment made certain that the abolition of slavery extended to all states and granted minimal citizenship to former slaves.

1866–The Civil Rights Act of 1866 granted “citizenship to all persons born in the United States, if they are not subject to foreign power.” This law overturned the infamous Dred Scott decision (1857), in which the Supreme Court ruled that African Americans were not citizens of the United States.

1868–The ratification of the 14th Amendment guaranteed equal protection to all persons under the law.  The amendment uses very similar language to the Civil Rights Act of 1866, but Congress wanted to assure that law could not be judged unconstitutional in the Supreme Court, and that the law could not be overturned by a simple majority vote.

1870–The 15th Amendment, which guarantees the rights of all (male) U.S. citizens to vote and states that such rights “shall not be denied or abridged by the United States or by any State on account of race, color, or previous condition of servitude,” was ratified. The amendment also gave Congress the authority to enforce those rights and to regulate the voting process.

However, the 14th and 15th Amendments were not very strictly enforced. After the Civil War, the Southern states started ushering in Jim Crow laws, which worked to segregate the population. These laws sometimes required literacy tests, poll taxes, and the so-called “grandfather clauses” that would allow those whose grandfathers voted to be able to vote—all of which effectively excluded African Americans from voting. In 1908, 10 Southern states rewrote their constitutions to include the Jim Crow provisions.

1964 – President Lyndon B. Johnson called upon Congress to enact a strong voting rights bill that would enforce the 14th and 15th Amendments.

1965 – The Voting Rights Act (VRA) was passed by Congress on August 5, 1965 and signed into law by President Johnson the next day. The VRA outlawed literacy tests and directed the Attorney General to challenge the use of poll taxes, which had already been outlawed, in elections. As to enforcement, the VRA set up a system of federal oversight that required specific states, cities, and individual counties with a history of discrimination (determined by a formula outlined in the law) to obtain “preclearance” in order to implement any voting changes. This means that prior to making any changes in voting procedure, a state, city, or county covered under Section 5 would need to get approval from a panel of judges or from the U.S. Attorney General.

The VRA was immediately effective. By the end of 1965, 250,000 new African American voters had been registered. By 1966, most of the states that required preclearance  saw more than 50 percent of their African American population  become registered voters.

However, because the VRA included unprecedented levels of federal oversight it was challenged immediately. Between 1965 and 1969, the Supreme Court heard a number of challenges to the VRA and issued decisions that consistently upheld its constitutionality.

2009 – Section 5 of the VRA was challenged again in Northwest Austin Municipal Utility District No. 1 vs. Holder, and Chief Justice John Roberts said, “Things have changed in the South.” At the time, the Supreme Court did not rule on the constitutionality of Section 5 but their decision reflected concern about the outdated data used to require preclearance.

Shelby County furthermore makes the argument that the protections offered by Section 5 are actually covered elsewhere in the law; Section 5 is simply the method of oversight.

Meanwhile, lawyers for the federal government cite the extensive hearings that Congress held prior to reauthorizing Section 5 in 2006. While the criteria for coverage in Section 5 have not been updated for quite some time, the lawyers argue that there is a process by which jurisdictions can apply for a  “bail out.” Many jurisdictions, in fact, have successfully gained this  “bail out” status and are no longer required to get preclearance prior to instituting changes in their voting procedures.

The federal government also claims that the protection offered by Section 5 is actually not the same as protections offered elsewhere. Under Section 5, the burden is always on the state to remain non-discriminatory. Under other sections of the law, individuals and groups may sue the jurisdiction if they institute discriminatory practices. However, that process takes time, as we have seen with the Voter ID laws and purging of voter rolls. That means that the burden shifts to disenfranchised voters.

The Supreme Court’s decision has not yet been released, but many pundits and analysts are predicting that the court is unlikely to uphold Section 5 in its current format. They may strike it down altogether or they may require Congress to rewrite the requirements for coverage under Section 5 using more up-to-date criteria. We can expect that a decision will be released by the end of June.

For more information, visit these websites: