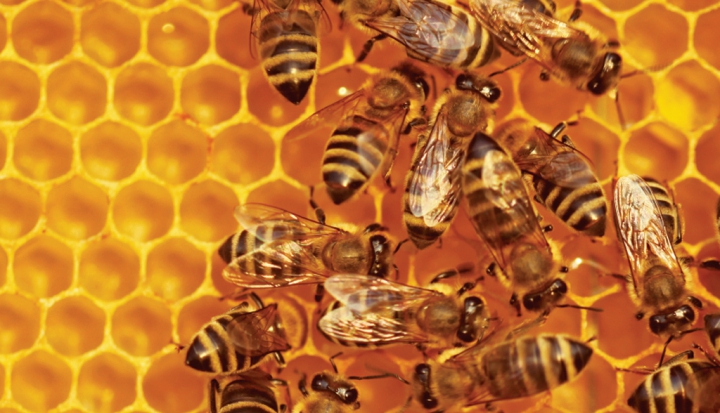 Unlike today’s humans, bees rock at living in harmony with creation.

There has been a death in my family—two actually, or 60,000, depending on how you count. To be specific, neither of my two beehives survived the winter of 2013, a particularly grim and gray affair this year. When I checked on the two royal dominions as autumn was descending, everything seemed well: There was plenty of honey for the winter and healthy populations of workers and larvae (baby bees). But when the hives were opened on the first spring day, nothing but a few dead bees and a winter’s worth of honey, completely untouched, remained.

Bees, of course, aren’t pets, so my grief wasn’t as severe as when my two beloved Siamese cats died some years ago. But my relationship with the bees was of a sort I’ve never had with another “animal”; it seems odd to say, but each hive had a personality of its own. I always felt like I was interacting with a single organism every time I opened the box to check on the queen and her astonishing court of honeycomb, stored pollen, busy workers, and developing larvae. I often found our encounters almost magical and was delighted to hear from a retired neighbor how much pleasure he got from watching the bees return home every day around 3 p.m., after they had completed their daily scavenging.

That is not to say our relationship was all honeyed sweetness; one encounter resulted in a trip to the emergency room because I had been sloppy in my preparation for that day’s work—and had failed to listen to the intensifying buzz warning me that the queen wasn’t receiving visitors that day. Those seven bee stings were a stark reminder that the human-bee relationship requires proper respect and preparation—not unlike the human relationship with creation in general.

The hives and I were partners to one another, each receiving something from the exchange. In return for a secure home with access to water and sunlight (but not too much), within range of flowering plants, the hive would provide me free honey.

It turns out there is more similarity in the bee-human relationship than we might think—and it’s not just that we humans rely on their and other creatures’ pollinating work to provide about a third of our food supply. As evolutionary biologist E. O. Wilson points out in his recent book The Social Conquest of Earth (Liveright), humans and bees (along with other queen-ruled insects such as ants and termites) are the only fully “eusocial” species, who create complex societies of divided labor that allow us to transform our ecosystems for our benefit. While insects have managed to live for 120 million years in harmony with their habitats, however, we human beings, 3 million years in, are on the verge of completely destroying ours.

It turns out that my bees were victims of the varroa mite, a bee parasite that feeds both on bee “blood” and on bee larvae. Varroa mites come from Southeast Asia (where the bees have adapted to their predation); they are an invasive species introduced by human carelessness. Like most parasites, varroa mites live only until they have wiped out their target—then they die, too.

My bees, even in death, remind me of the precarious path we are now walking with the rest of God’s creation; indeed, the epidemic of honeybee “colony collapse,” which we now know is a direct result of poisoning by a synthetic pesticide, should be a warning to us all. We can either take a page from the insects that for eons have filled a vital niche in creation, or we can, like the varroa mites, eat ourselves out of creation’s house and home.

The ancient bishop St. Basil the Great counseled: “Imitate the character of the bee, because it constructs its honeycomb without injuring anyone or destroying another’s fruit.” Having enjoyed the sweetness that a mutually beneficial partnership with my bees can provide, I hope to work on being a better companion animal to the rest of earth’s inhabitants. Perhaps in this growing season we all might pledge to do the same.