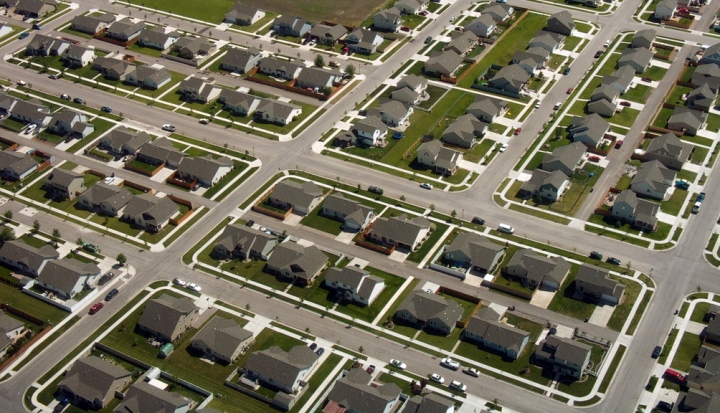 The church should push back to halt the long reach of urban sprawl.

I went to high school in a small town northeast of San Antonio. Our school district was made up of three towns just like mine, none big enough to support its own school. But even in our tiny town I couldn’t walk or ride my bike to school despite the fact that it was a mere mile from my house. The dirt farm road leading to my neighborhood had been covered in asphalt at least a decade prior, literally paving the way for subdivisions to branch off.

The city planners had chosen to leave out sidewalks, and with the speed limit set at 40 mph (which meant people drove at least 50), biking just wouldn’t have been safe. Still, even though my family lived in one of those brand-new housing developments, we could occasionally hear a cow bellow a long “moooooooo” from our front porch. Our street ended next to a farm.

While visiting Texas last year, I drove from San Antonio to Austin and passed by my old town. But as I headed north, I recognized nothing. The interstate was littered on both sides with billboard after billboard alerting me to a Bed Bath & Beyond, Home Depot, Walmart, Sam’s Club, or Costco. We’d had a McDonald’s and a local barbecue chain 15 years ago. Now there was a Chili’s, an Applebee’s, a Chipotle, and a Macaroni Grill.

I was surrounded not by the farmland that had once draped the gently rolling Texas Hill Country, but by cars—some on the road, most baking in the sea of parking lots that flanked both sides of the interstate for miles.

Austin Bramwell of The American Conservative rightly identifies sprawl as “an umbrella term for the pattern of development seen virtually everywhere in the United States.” It’s likely that you, too, watched your hometown transform over the past 20 years into row after row of chain restaurants and stores that meander aimlessly. Your roads probably also seem to be widened every year in order to add subdivisions and turn lanes into shopping centers. And traversing a big box parking lot or trying to get back on the main road from one takes skills they don’t teach you in driver’s ed.

A failure to measure successful growth and development in long-term sustainability can have detrimental effects not just on the environment but on public health, our sense of community, and the poor. Sprawl is such a, well, sprawling problem; its negative effects reach far and wide. And those negative effects are found in many of the social justice issues that the Catholic Church is already working to address, making sprawl a political issue that we cannot afford to ignore.

It’s a complex problem that will take a long time and a lot of people to solve. Yes, it is an issue directly impacted by government policies, but that doesn’t mean individual Catholics—and the church as a whole—can’t do their part.

Of course, urban development can be a good thing. It can increase a city’s revenue and create much needed jobs. But measuring growth in terms of short-term economics has not always served us well. “Some growth brings more costs than benefits,” says Donella H. Meadows, director of the Sustainability Institute in Hartland, Vermont. “That kind of growth makes us poorer, not richer. It shouldn’t be welcomed or subsidized or managed or accommodated; it should be stopped.”

Good growth is carefully planned and takes into consideration more than just the desire of businesses to make a profit and cities to increase tax revenue sources. In fact, laser focus on the immediate economics of growth can end up costing a city more money. For example, when a Walmart built on former farmland starts drawing more car traffic, it will eventually need a wider road, not to mention a traffic light or two. Then there is the parking lot and all of the polluted runoff it will inevitably create. And what about the costs associated with getting city power and water to the outskirts of town? Who will pay for these added expenses? Not Walmart.

During the 2012 presidential election, more Americans became familiar with the term subsidiarity—an important principle of Catholic social teaching—thanks to vice presidential candidate and Wisconsin Rep. Paul Ryan. Because urban sprawl varies in its forms and causes from city to city, subsidiarity is a principle better applied to the response to unplanned, unsustainable development than to meeting the immediate needs of those experiencing poverty.

In Pacific Northwest cities like Portland, Oregon, where care for the environment is increasingly important to residents, “green belts,” boundaries where urban growth is prohibited, are being enforced. Such designated areas aren’t likely to work in regions that don’t enjoy the type of landscape that prevents developers from leapfrogging these green belts to develop just beyond them. What may work better—or in conjunction with green belts—are incentives that attract developers to more centralized areas, making it less expensive or more profitable in the long-term to open a business in the center of town, rather than build one just on the outskirts. In Boulder, Colorado a limit on building heights allows residents to maintain their views of the mountains. In the Midwest building up prevents building out.

How do individuals do their part if government policy seems to be the best way to attack the problem? It’s one thing to recognize that the most effective way to slow sprawl is through better government policies and regulations. It’s another to excuse yourself from any and all responsibility. No one likes to be told what to do, especially when it comes to the choices that affect our everyday lives, but part of the gospel message is to examine our day-to-day actions and consider whether they reflect God’s call to promote justice and community.

If you’re fortunate enough to be in the market for a new home, try to think beyond your family’s immediate wants and needs. When my husband told his brother that we were in the process of buying a condo in Chicago, his brother was surprised. “Don’t you want kids? Where will they play if they don’t have their own backyard?”

Personal outdoor space is a luxury, especially in cities with high population density. Fortunately, our new home is within walking distance of several public parks, one of which is even on Lake Michigan. It may not be as convenient as playing in our own backyard, but the trade-off is that we’ll have more opportunities to encounter our neighbors, who are economically, ethnically, and religiously diverse. Plus, we’d never be able to afford a swing set as cool as the one at the park four blocks away.

Maybe your parents, or even you, are aging and looking to downsize. A move to a more populated area with services like public transportation could make sense. There’s no required eyesight test for a bus pass. When seniors can no longer (or simply don’t want to) drive, public transit options can be the difference between making it to church on Sundays—and being part of a parish community—and simply watching Mass on EWTN.

When it comes to making big changes, local government really is where the rubber meets the road. It’s the place where individual voices count most. Sure, voting in presidential elections is important, but the way to really have a positive effect on your community is by staying informed on local issues and attending city council and neighborhood meetings. Churches are important voices in the community, and politicians, from presidents to members of the city council, are known to listen. There’s something to be said about strength in numbers, and churches have a long history as spaces for grassroots movements to emerge.

While a parish is an excellent place to join forces with other members of your community, parishes also must be shining examples of the kinds of decisions they want local businesses and government to make. For example, paving over a grass lot may be a cheap and easy way to combat the parking lot fiasco that takes place after each Mass on Sunday, but will the problem just return in a few years? Lobbying the city council for a crosswalk and a traffic light might encourage more people to walk to church—a more sustainable alternative.

Solving the complicated and vast problems of urban sprawl will not take a single initiative or simple solution. But that’s not an excuse to throw our hands up and do nothing. Slowing sprawl, an umbrella term, will take the umbrella church, with its diversity of voices, locations, experiences, and ideas.

1. Urban sprawl is something:

2. Businesses made accessible by sprawl are good for the community because they provide jobs and stimulate the economy.

Representative of “other”:
“They are a mixed blessing.”

3. I’d rather have local stores in my community that I can walk to than major chain stores along large highways.

4. The potential benefits of urban development far outweigh any costs that we might incur along the way.

Representative of “other”:
“Benefits and costs have to be weighed and are unique to every area.”

5. Sprawl doesn’t diminish our sense of community, it just makes the community larger.

6. One sustainable measure I wish my city would take is to:

7. If I were buying a new home for my family, I’d take into account:

Representative of “other”:
“Safety and walkability, including access to local stores, parks, and services.”

Results are based on survey responses from 98 USCatholic.org visitors.