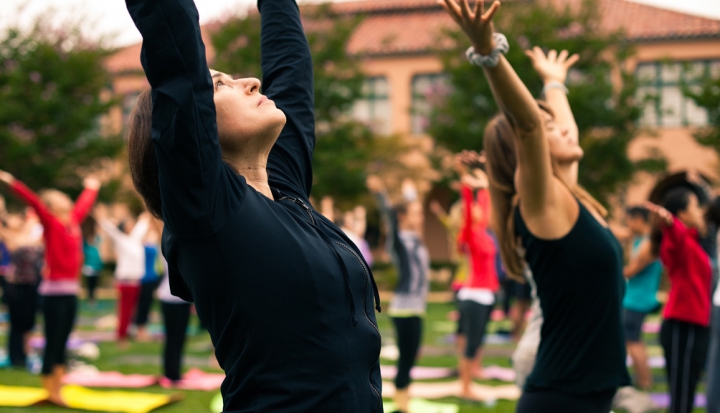 Ten ways to determine if a practice is compatible with your Catholic faith.

Just because a spiritual practice comes from outside the Christian tradition doesn’t automatically mean it conflicts with church teaching—nor does it automatically mean the opposite. If you’re not so sure about your son’s meditation practice, your friend’s devotion to reiki, or if you can, in good faith, take that yoga class, your goal should be to wisely discern the answer.

The term “New Age” is a bit of a catch-all in this document; it lumps together practices such as acupuncture, Zen meditation, yoga, homeopathy, transpersonal psychology, transcendental meditation, Feng Shui, crystal healing, and astrology. “The mere use of the term ‘New Age’ in itself means little, if anything,” the authors write. “The relationship of the person, group, practice, or commodity to the central tenets of Christianity is what counts.”

Here are 10 questions the document presents to help Catholics evaluate whether a particular spiritual practice is acceptable.

1. Is God a being with whom we have a relationship or something to be used or a force to be harnessed?

“The New Age god is an impersonal energy, really a particular extension or component of the cosmos…. the Christian understanding of God … is in himself personal, the Father, Son, and Holy Spirit.”

2. Is there just one Jesus Christ, or are there thousands of Christs?

“Jesus Christ is often presented in New Age literature as one among many wise men, or initiates, or avatars, whereas in Christian tradition he is the Son of God.”

3. The human being: Is there one universal being or are there many individuals?

“New Age is thinking based on totalitarian unity…. the Christian approach grows out of scriptural teachings about human nature; men and women are created in God’s image and likeness.”

4. Do we save ourselves or is salvation a free gift from God?

“In New Age thinking, key words are self-fulfillment and self-realization, self-redemption…. [For Christians] the way to salvation is not found simply in a self-induced transformation of consciousness, but in a liberation from sin and its consequences….It necessarily moves us toward loving solidarity with our neighbor in need.”

5. Do we invent truth or do we embrace it?

“New Age truth is a matter of finding one’s own truth in accordance with the feel-good factor. Evaluating religion and ethical questions is obviously relative to one’s own feelings and experiences.”

6. Prayer and meditation: Are we talking to ourselves or to God?

In New Age teaching “techniques for going deeper into one’s own soul are ultimately an appeal to one’s own ability to reach the divine, or even to become the divine.” Christian prayer, however, has a “double orientation which involves introspection but is essentially also a meeting with God … Christian mysticism is essentially a dialogue which ‘implies an attitude of conversion, a flight from the “self” to the “you” of God.’ ”

7. Are we tempted to deny the reality of sin or do we accept that there is such a thing?

“In New Age there is no real concept of sin, but rather one of imperfect knowledge….

[The Catechism of the Catholic Church says] ‘Sin is an abuse of freedom that God gives to created persons so that they are capable of loving him and loving one another…. It is a failure in genuine love for God and neighbor caused by a perverse attachment to certain goods…. Sin is thus ‘love of oneself even to contempt of God.”’”

8. Are we encouraged to reject or accept suffering and death?

“Some New Age writers view suffering as self-imposed, or as bad karma, or at least as a failure to harness one’s own resources. Others concentrate on methods of achieving success and wealth…. Christians know that [in the words of John Paul II] ‘In bringing about the redemption through suffering, Christ has also raised human suffering to the level of redemption.’”

9. Is social commitment something shirked or positively sought after?

“The fusion of individuals into the cosmic self, the relativisation or abolition of difference and opposition in a cosmic harmony, is unacceptable to Christianity…. A genuine Christian searches for unity in the capacity and freedom of the other to say ‘yes’ or ‘no’ to the gift of love.”

10. Is our future in the stars or do we help to construct it?

Christians “are ready for the last days when Christ will come again; their New Age began 2,000 years ago, with Christ.”

This article is a web-only feature that accompanies “Spiritual exercises: Can other religious practices strengthen your Catholic core?” which appeared in the May 2013 issue of U.S. Catholic (Vol. 78, No. 5, pages 12-17).