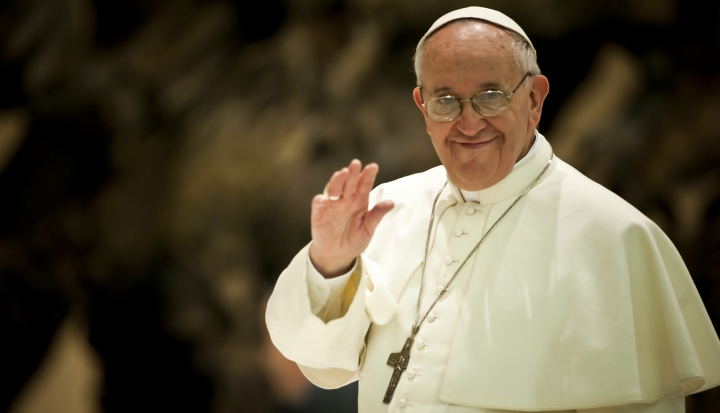 Claretian Father Gustavo Larrazábal, an old friend of Pope Francis, talks about the pope’s past in Argentina and what it means for the future of the church.

How did you meet the new pope?

The then-Cardinal Jorge Bergoglio gave homilies and spoke about various interests close to his heart, such as civic involvement and education. He came to Claretian Publications in Argentina, where I was the director at the time, and asked if we were interested in publishing them. With the exception of his biography and conversations with a rabbi, which were published by Vergara, we published everything he brought us.

And I was the one to meet with the cardinal. We would chat and exchange ideas. Throughout the years, we built a strong relationship. He valued the publishing house and never wanted to receive royalty payments. He said the money should go into our apostolic works. He even wanted us to sign a document saying that, if anything happened to him, he did not want anyone to go and claim anything from the Claretians. I was a little embarrassed by this, and I sort of resisted. The truth is the paper was never signed and that is my fault.

Is Pope Francis a good writer?

Yes, he is a very good writer. He did not have time to edit. He would show up to my office with a bundle of papers in his arms and say, “Here is all this. Manage it as best as you can.” We, the editors, and particularly myself, would edit, revise, and send the finished work to him for his approval. He would make his own comments, but the truth is that we were quite free.

Our only arguments were over covers. The cover is very important for me, because it is what sells the book. On two occasions, I put his picture on the cover and he was mad. But I said to him, “Without a good cover, the book will not sell. So, you can get mad, but the cover will stay.”

Is he as humble as he seems?

Definitely. In 1998, upon the death of his predecessor Cardinal Guarracino, he became the Archbishop of Buenos Aires. He immediately decided to leave the episcopal residence, which was a mansion in a residential area where the president and his family also lived. He rented out the mansion to a religious congregation and took a simple room on the third floor of the chancery.

He also had a very austere office on the second floor. As he was in downtown Buenos Aires, it was evident that he did not need a car or a driver. He moved by walking, subway, or bus, or, if in a hurry, he would take a taxi. I often asked him to go to some place to celebrate Mass or to bless a bookstore, offering to drive him, but he always said, “No, no. Don´t worry, I will take my time. You must take care of the people.”

He did not have a secretary or monsignors hovering over him, even though the archdiocese is quite vast and there are six auxiliary bishops. But when people wanted to see him, they were always surprised to find out how easy it was to get an appointment. Sometimes he even opened the door himself because many afternoons he was by himself in the building. If you knew how to go in, you simply went up to the second floor. Otherwise, he would go down to open the door. Even from Rome, he personally informed his newspaper provider that he would not need daily delivery any longer. He is very warm, very personal, and very compassionate.

When I turned 50, I invited Cardinal Bergoglio to celebrate the Eucharist and to join the party. He came, but he refused to preside. He said that it was my place to preside, and that he would concelebrate with my Claretian brothers and other priests present. Later, contrary to his custom, since he does not normally go to parties and is very careful about what he eats because of his health, he stayed, greeted my mom and other members of the family and everyone present, and stayed for quite a while. When he was leaving, someone accompanied him to the street corner to hail a cab, since he refused to have someone leave the party in order to take him home.

Will all that change in Rome? Will he be able to change Rome?

When you are 76, you don´t change easily. He has demonstrated that in his first days at the Vatican. He does not want to live in the residence. But it’s not just his age. He has transported his Buenos Aires style to the Vatican. There are things he has totally integrated in his person.

Pope Francis is a master of signs and gestures. He knows the power gestures can have. He does not do it as a show but out of conviction and deep faith. What’s especially interesting is that past few days he has not called himself pope but bishop of Rome. That’s an expression of a particular understanding of the papacy.

So Cardinal Bergoglio is clearly a shepherd. Is he also a theologian?

He is, above all, a shepherd, which is not to say that he is not a theologian. But his interest is very pastoral. For example, for all his attention to social issues and to the poor, he has never supported liberation theology, but he does not put brakes on it either. He says, speaking about catechesis, “As a shepherd, I allow things to happen. I prefer that there not be a single catechesis, because that makes for a richer situation. I allow for things to flow, provided things are within the scope of the doctrine of the church, and do not fall into heresy or absurd ideas.” I think this applies to his approach to liberation theology. He did not reject it nor advocate for it.

When things get out of line with the positions of the church, he has to confront them. That has earned him the hostility of the government on certain occasions. Because, although several departments of the Argentinian government—particularly those of social issues and education—really benefit and support the development and education projects of the church and have greatly helped us, when it comes to issues of morality and social doctrine, he has needed to speak up. That was the case with the famous issue of gay marriage, which is the banner of liberalism and gender equality. Cardinal Bergoglio was trying to negotiate a solution that would not recognize marriage, but would allow for a provision for legal unions that would protect partners. His efforts were derailed by other forces, and in the end, the government legalized same-sex marriage. He wanted to dialogue and negotiate–always maintaining, of course, the position of the church.

Some have accused him of not having confronted the Videla dictatorship.

I myself asked Cardinal Bergoglio what happened, particularly with the famous case of the two Jesuits who were arrested when he was provincial. The truth is that the situation of Argentina at the time was very complex. There was terrorism, state terrorism, oppression, and violence, and the military did not know how to handle the situation. At that time, Jorge Bergoglio, Jesuit provincial, was 36 years old. He told me, “I swear Gustavo, that I did what I could and what was within my reach. I was totally inexperienced and certainly made many mistakes as a provincial. But I did what I knew how to do and what I could.”

The reality is that, while it would have been great to have a more courageous church in Argentina–as it was in Chile, where the church saved many lives through its work of advocacy and negotiations–Bergoglio did personally save many lives by hiding people, negotiating for their liberation, and on one occasion even giving his own passport to someone. The truth is also that the two Jesuits who had been arrested were liberated precisely because of Bergoglio’s negotiation.

What are the issues today for the church in Argentina?

The most important issues are really global and not exclusive to the Argentinian church. What is important for us is revitalizing our evangelizing efforts and ministering to families. There is the very urgent topic of people who do not get married, not because they cannot but because they simply do not want to. We must also deal with divorced and remarried couples and the issue of priestly celibacy.

After the euphoria over the election of an Argentinian pope has calmed, the challenge facing the church is to see how all this will be used for a revitalization of the faith. We will have to see what concrete gestures the church engages in, and how it channels all this energy. I believe that, deep down, people will start to reflect on the significance of the election more seriously and deeply.

Are there concerns that Pope Francis is an outsider in the Vatican? How that might affect his ministry and his effectiveness?

I believe—and this is a very personal opinion—that he is very clear on what he has to do. In just a few days, he has set a very definite pace. He knows well many people of the Roman curia. Of course, we will also have to see who is going to come into the curia. The topic of episcopal appointments is very delicate and there are very sensitive and difficult issues in the situation of the church that need a lot of tactfulness. But I believe Pope Francis sees clearly the changes that need to be made, and he is keenly aware that he has to act quickly, because at his age, he does not have much time.

My only fear is for his health. He is very methodical, but the pace of life at the Vatican will be much more hectic than what he had before. In Buenos Aires, to a certain extent, he could control his time. But now, as a head of state, there will be protocol issues and he will not have as much control. For his part, though, he knows exactly what he needs to do.