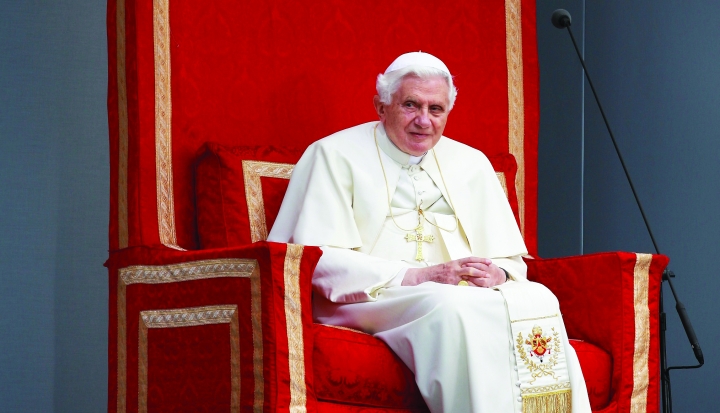 Pope Benedict’s final act may be one of his best gifts to the church.

So were you shocked, just shocked, when Pope Benedict XVI resigned back in February? “Shock,” or at least some form of it—“Pope’s sudden resignation sends shock waves through church,” claimed Reuters—appeared in nearly every headline covering the pope’s precipitous exit from Peter’s chair.

I’m actually a bit shocked—that anyone is shocked. He practically signaled when he got the job that he didn’t necessarily intend to die in office. On the contrary, Benedict spoke openly, both during the waning years of Pope John Paul II’s papacy and after his own election, of the possibility of a pope resigning.

After all, the pope is a bishop, and bishops, according to canon law, are required to submit their resignations on their 75th birthdays. Benedict—elected at 78—always foresaw the possibility of stepping down, especially since he was elected three years after that mandatory retirement age.

Papal surprise aside, to my mind Benedict’s action is a healthy and maybe deliberate diminishment of the person of the pope—the man who actually exercises the ministry. The pope has, especially since the declaration of papal infallibility at the First Vatican Council, acquired a quasi-inspired status, as if he had a direct line to the Holy One. That aura grew to a new level of unhealthiness under Pope John Paul II, whose papacy centered in so many ways on his particular personality.

Benedict, on the other hand, has reminded us that the pope, like any bishop, merely holds an office in the church—albeit an extremely important one. But he is also a regular human being, a fact Benedict put with breathtaking humility and simplicity in the announcement of his resignation: “I have come to the certainty that my strengths, due to an advanced age, are no longer suited to an adequate exercise of the Petrine ministry.”

Pope Benedict’s resignation tells me that he knows his role, both as bishop of Rome and as successor to Pope John Paul II. Joseph Ratzinger was elected as a short-term caretaker pope, and nearly eight years is a sufficient amount of time to let the echo of Pope John Paul II’s perhaps too-long papacy fade. While I think Pope John Paul II saw himself as personally called by God to live out the end of his papacy as he did—and there was indeed something beautiful about his death and how he was cared for by the crowds outside his window—Benedict, on the other hand, leaned into the job with the mind of a professor: The work he set for himself to do is done; now it
is time for someone else.

Benedict may have given one of his best gifts to the church now, at the end of his time as pope, by demystifying the office of the papacy. He wasn’t “abandoning the flock,” as one Italian parliamentarian put it in the Reuters story. On the contrary, his resignation is an act of pastoral care and concern, both for the church as a whole and for himself. Indeed, I hope it will become a new papal “tradition,” especially given the long lives contemporary popes can expect to have and the ever-shifting needs of the church.

Questions now turn on how the pope emeritus will influence his successor—or worse, whether he will be a new center of power in the Vatican. (The New York Times even asked the ludicrous question of whether Benedict would still be infallible, as if papal infallibility is a personal attribute.)

The two-pope worry is actually nothing to worry about because, simply put, as Benedict demonstrated, there is only one papal office. Besides, I imagine that he wants to be left alone with his books and his time for prayer, even as he lives just a stone’s throw away in a Vatican convent.

However we judge Benedict’s service to the church, it was always offered in integrity and charity—even if some of the results were not always to our liking. At any rate, his last act has been among his best, for which I for one am grateful.