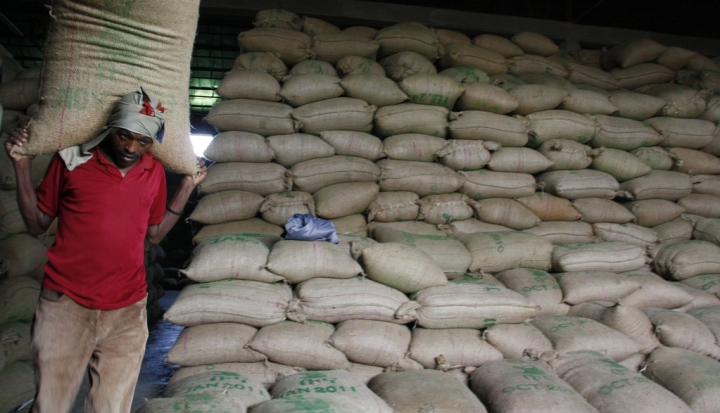 Editors' note: Sounding Board is one person’s take on a many-sided subject and does not necessarily reflect the opinions of U.S. Catholic, its editors, or the Claretians.

We should all be willing to chip in so the poor in our global economy don’t get short-changed.

At a Catholic school retreat, my coworkers and I led fifth graders in a team-building game. Four groups, each with a Hula Hoop, had to get all of their classmates’ shoes into their own hoop. They could carry only two shoes at a time, and they could not prevent anyone from carrying shoes away from their hoop. Ten minutes into running, falling, and laughing, they began to notice that nobody was making any progress. Soon kids were shouting, “This will never work! No one is going to win this way!”

There was never any rule about the Hula Hoops being immobile, we announced. Hula Hoops were soon moved to new spots, but the goal remained elusive. Eventually two teams put their Hula Hoops together and worked as a combined team to gather shoes. Finally, all the teams stacked their Hula Hoops on top of each other and all the shoes were gathered into one pile. In the end they realized the importance of working together, and that no one wins until everyone wins.

Social responsibility follows the same understanding. It is a call to live in relationship with God, and by extension, with God’s people and creation. The Compendium of the Social Doctrine of the Church says, “Humanity is coming to understand ever more clearly that it is linked by one sole destiny that requires joint acceptance of responsibility, a responsibility inspired by an integral and shared humanism.” God’s call is not only for our individual salvation but also for the world’s redemption. We all must do our part.

For example, the most traded commodity around the world is coffee. In the 1980s, when a new method of growing coffee—in the sun rather than shade—produced a cheaper but lower quality product, coffee prices around the globe plummeted. In order to yield any profit, coffee growers must now commit all of their land to growing coffee, meaning they can’t use any land to grow their own food. Imported food is expensive, though, so the poor get poorer.

Meanwhile stockholders of coffee companies, or any public company, continue to expect increased profits. The companies, seeking to reduce costs, often move manufacturing plants to poorer countries for ever lower wages. People are laid off, left behind, and, in the scramble to survive, they purchase the cheapest products they can find, including coffee. We are running around and falling, but no one is laughing. Unlike in the Hula Hoop game, very few have realized that “no one is going to win this way.”

If “winning” is sustaining life and doing so comfortably, can we win when a select few are able to do so and most others are not? For Christians, winning is loving our neighbors as ourselves. If we see food, shelter, clothing, clean water, education, health care, and employment as fundamental goals for ourselves and our families, then it is more difficult to love others as ourselves when we support a system that denies these basic rights to our neighbors. We must recognize that we all experience the same call to actively love our neighbors.

This call speaks specifically to a country like the United States, where it is easy to be misled by our sense of “winning.” “Few are guilty, but all are responsible,” Abraham Heschel wrote, reminding us that we have a role in that never-ending Hula Hoop game and awakening us from our lull of complacency toward social justice.

The first step in responding to the call to social responsibility is to educate oneself and others through experience, contemporary reflection, and mission trips. Start by learning, for example, about the plight of the coffee growers in developing nations. Consider traveling to meet those who are suffering because of the desire for cheaper coffee. If you can’t meet them in person, visit websites like JustHaiti.org to read more about how consumer choices impact real people.

After listening to the coffee growers, I now understand that loving God and neighbor includes more than giving to charity—it includes buying fair trade coffee, where roasters and sellers provide respectable wages and purchase beans from growers at a fair price. As Pope Benedict XVI wrote in Caritas in Veritate, “Purchasing becomes a moral—and not simply economic—issue.”

The second step is to advocate through action. Purchase fair trade products as much as possible, for yourself and as gifts for others. Ask your grocer to stock fair trade products. Be counted in meetings, in community organizing, and in protests.

As an American descended from Italian immigrants, I am sometimes a complacent citizen. I can vote and speak out. However, undocumented immigrants cannot. So I attend rallies and write to representatives on their behalf, calling for reform of our broken immigration system and an end to the separation of families.

The third step is to denounce unjust social structures and systems. The phrase “live simply so that others can simply live” is attributed to St. Elizabeth Ann Seton. If we take this to heart, we must reject the practices that cause the running-around-shoe-grabbing. We must realize the rules never said we can’t pool our resources. Move those Hula Hoops!

When investments by the company Fidelity included organizations that financially supported the regime responsible for genocide in Darfur, the group Save Darfur called for investors to close their Fidelity accounts. You can also denounce the goal of profit over people by moving your stocks to “socially balanced” investment portfolios.

Denouncing injustice doesn’t mean doing away with systems. Social responsibility doesn’t oppose market capitalism. Instead, it calls for accountability and responsibility in the economic market.

We can have a free market without hoarding excesses beyond our needs. Executive salaries do not have to be at the expense of sufficient wages that sustain the family lives of average workers. Consumers can take into account the negative impacts of a lower-priced, lower-quality product such as coffee and see every purchase and investment as a moral—not just economic—decision.

Being socially responsible means asking: How much do we really own in God’s eyes? Is it God’s intention that some humans acquire a hundredfold of what many others need? Living in union with God, we know the answer is no. If God’s intention is that all are fed and sustained by the earth, and our human systems prevent that, then we have not been agents of God’s love. We have not loved our neighbors—be they coffee growers, factory workers, immigrants, or countless other low-paid service personnel—as ourselves.

We cannot live solely as individuals. How we live impacts others, and we must be socially responsible to respond to God’s trust in us. In all that we do we should ask ourselves, “How will this affect others?” and “Is this the best way to respond to God’s love?” We must learn to pool our resources, work together, and stack our Hula Hoops on top of one another. Because no one wins until everyone wins.

1. I would gladly spend a little more money on coffee to help coffee growers earn a just, livable wage.

2. My responsibility is first and foremost to myself and my family, not to making sure people I’ve never met are taken care of.

Representative of “other”:
“Both are equally important.”

3. When shopping, I look for items that are:

4. I work hard for my money, so I should be able to spend it however I want—even if that means buying cheaper coffee.

5. It’s completely unrealistic to expect people to pay more money for fair trade or other such products even if they do help workers in another country.

6. I don’t believe we can ever convince enough people to live a socially responsible lifestyle for it to make a significant difference.

7. To be more socially responsible, I have:

79% – Paid higher prices for fair trade products.
77% – Boycotted products and companies that contribute to unfair treatment of workers and unjust policies.
76% – Cut down on some of my own unneeded excess so that I have more resources to give to charity.
67% – Educated others about ways that they can be more socially responsible.
43% – Participated in protests and rallies against injustice.
42% – Made investment decisions based on social concerns, not maximizing profits.
1% – None of the above

Kathy McGourty is a youth minister in Bloomingdale, Illinois.