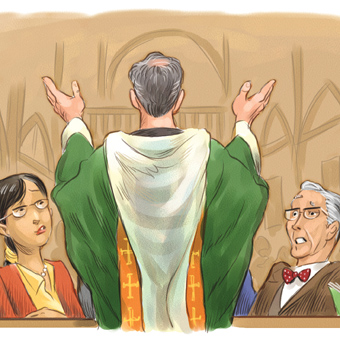 Reporting straight from the pews after a year of the new translations, U.S. Catholic readers say they are still stumbling through the prayers.

Stilted, awkward, unnatural, strange, choppy, clumsy, obtuse. If you read these words in a movie review, would you head for the ticket line or run in the opposite direction? What about wooden, tortured, terrible, ridiculous, inaccessible, or abominable? Are you at least intrigued by what could warrant such description? Would you want to check it out once a week?

These words weren’t in a review of a movie, play, or book. Unfortunately, they’re how the majority of USCatholic.org visitors describe the new Mass translations after experiencing them for a full year. Repeatedly assured they would like them once they got used to them, nearly half of the readers who took the U.S. Catholic survey (49 percent) say their current attitude toward the revised wording remains negative and they’re unhappy that they’ll have to continue to use it. An additional 17 percent say they still don’t like the new wording, but that it’s not too big of a deal.

Those who continue to dislike the translations have three main complaints. Catholics feel betrayed by church leadership and treated like children thanks to the way the translations were implemented; they’re concerned about the theology implied in some of the new wording; and the new words themselves make it difficult to be prayerful because they don’t feel natural and are difficult to memorize.

“I have been disappointed from the outset that so little consultation has been organized between the church leaders and laypeople,” says Rosemary Keenan of Gwelup, Western Australia. “Women form the major part of the worshipers in the parish I attend, and we have again been overlooked, discounted, and generally seen as second-class citizens.”

Eric Brown of Louisville was heartbroken by what he says was an absence of dialogue around how to improve the translations. “The new translation was presented as an edict. The official catechesis looked suspiciously like political propaganda.”

Several readers used the phrases “rammed down our throats” and “foisted upon us” to describe how the new translations came about. Eugene Sheehan of Cork, Ireland thinks that it’s a sign of something deeper: “This whole process indicates the disconnect that has arisen between the institutional church and the church of the People of God.” Sheehan laments, “It has stolen my full participation in the Eucharist and reduced me to being an observer.”

Joseph Weber of Arlington Heights, Illinois echoes Sheehan. “The new translations have placed the laity further from the center of the eucharistic celebration. We have again become spectators to a ‘magic show,’ ” he says.

Many respondents are critical of wording that they feel doesn’t accurately express their relationship to God or what the Mass is about.

Frank Butler of Lansdale, Pennsylvania calls the new translations “antiquated and individualistic, rather than gospel-based and communal.” Christina Ross agrees. “The new words take away from the ‘we’ of celebrating the Eucharist communally to ‘I,’ she says. “If I wanted to pray alone, I’d stay at home.”

“I don’t like the words for the consecration,” says Joan Jennings of Baltimore. She emphatically insists, “Jesus did not use a chalice. It was a cup.” And Reyanna Rice holds nothing back in her criticism: “Listening to Mass in this translation is about as uncomfortable as listening to an hour of fingernails being dragged across a blackboard.”

Talib Huff is disappointed at what didn’t change. “There was an opportunity to replace gender-specific language with words that were neutral, and it was passed by,” he says.

Some people simply feel tripped up by the new words, either because they’re “stilted” or just unfamiliar.

Ginny Garza says she has difficulty “having to read along with words that are not my own or don’t make sense to me.” Jacob Lowry of San Diego says that after having had his whole life to reflect and pray with one translation, it’s been challenging “integrating spiritual sincerity to the new words.”

While most churches bought laminated cards for parishioners to use at Mass, Kay Miller in Katy, Texas says that many in her parish don’t participate in the responses because there aren’t enough sheets for everyone.

Not everyone is unhappy with the new Mass. Seventeen percent say they like the new translations even better, most of whom say that they are a return to the true meaning of Mass.

“It’s more like what I learned as a child. Mass is more respectful and prayerful. The new translations remind us where we are and why we are there,” says Cindy Criteser of Westland, Michigan. Frank Hartge of Reynoldsburg, Ohio agrees: “The words more fully communicate the church’s teaching.” Michael D. Ketter of Owasso, Oklahoma finds that he’s “learning more Catholic vocabulary and seeing that much of the vocabulary is the same as it once was decades ago.”

Katy Love in Spokane, Washington is frustrated with people she describes as “wayward Catholics causing a visible disunity in the church” in their persistent complaints about the new translations. She thinks that after a year, the new words should start to come easier. “If you’re still slipping up, you’re not paying attention or not fulfilling your weekly obligation consistently.”

The transition to the new translations a year ago ran the gamut from “absolutely nothing” to explanations in the weekly bulletin to practicing the responses in advance of the official change. Paul Zaccagnino says his priest apologized for them.

Reports of Catholics leaving for other churches over this issue are merely anecdotal at this point, but a full 25 percent claim to know someone who’s left to worship elsewhere because of the new prayers. A handful say that even worse is how they don’t see these translations speaking to young people, and they worry that they are a sign of further changes to come, such as mandating the use of Latin.

“I know a number of people who have talked about leaving, but none I know have left so far. However, attendance seems to have gone down,” says Robert York of Joppa, Maryland.

Anthony Juanillo of Dallas says, “Some of my bilingual friends started to attend Spanish services instead or they just stopped going. Some even left the Catholic Church and started attending Episcopal services instead.”

“It is difficult to hear my 17-year-old daughter, who is an active, faith-filled young person, say that she feels that the new translation has lofty, non-inclusive language that puts a greater distance between the people in the pews and the clergy,” says Mary Rademaker of Louisville. Vincent Couling in Pietermaritzburg, South Africa is frustrated “seeing my young niece and nephew have to emphasize the words ‘through my fault, through my fault, through my most grievous fault.’ ”

Asked what they’d do to improve the new translations, several suggested ditching troublesome words and phrases.

“Consubstantial!” exclaims Eileen Amatrudo of Downingtown, Pennsylvania. “Who talks like that?”

Lynn Gonzales in Pewaukee, Wisconsin recommends critiquing the translations in three years, making any necessary changes, and then critiquing again in another three years.

One thing Louis F. Pauzano Sr. of Philadelphia says he knows for sure is, “God in heaven isn’t saying ‘Ah, they finally got it right.’ ”

1. The following best describes my current attitude toward the new Mass translations:

I still dislike the new translations and am unhappy that I’ll have to put up with them for the foreseeable future. – 49%

I don’t particularly like the new translations, but I’ve come to accept them and they’re not that big of a deal to me. – 17%

I personally enjoy the new translations as much as, if not more than, the old version. – 17%

I was unsure about it at first, but I’ve grown accustomed to the new translations. – 6%

2. Sometimes I still slip up during Mass and accidentally use the old responses.

3. I intentionally continue to respond at Mass using the old translations.

4. The new translations have had a positive effect on my participation in and/or prayerfulness during Mass.

5. The hardest wording in the new translations for me to get used to has been:

Representative of “other”:
I miss the “protect us from all anxiety” in the priest’s words during the Our Father. I cannot connect with “keep us safe from distress” nearly as much.

6. I know people who have left to worship in other churches because of the changes in the Mass.

7. I wish we could just go back to using the old translations.