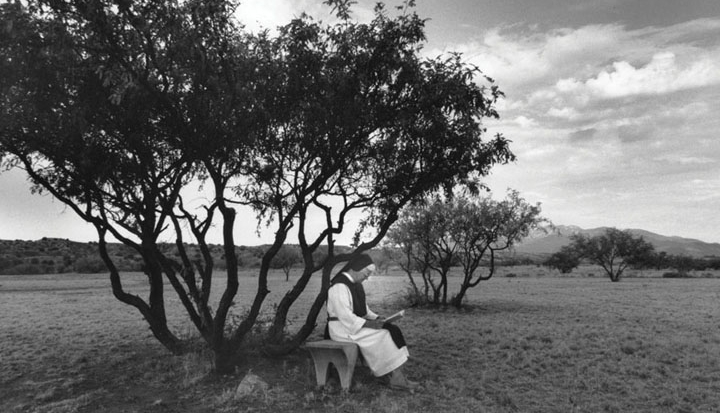 Some names were poor fits. One called Jerome preferred sheet music to Bibles. Her inner-city glee clubs were legendary, the yearly recipients of national titles. Another named Magdala was innocence personified.

These names were formally given to us the day we walked two by two down the long, marble aisle of the motherhouse. We were dressed as brides with veils over our eyes, no grooms in sight, and futures unknown. Oblivious to the majestic organ and the vast choir of nuns’ voices, we glided in a shimmering storm of white, sweeping past the pews, past our gasping families, past the life we had known.

The local bishop in his ceremonials indicated the beginning of our new lives by announcing our new names. We were called Athanasia, Laurentia, Alfred, Brigada, and Ancilla, meaning handmaid. Ecce ancilla Domini, we said. Behold the handmaid of the Lord. We were called Joan of Arc, who was burned at the stake by clerics one year and declared a saint the next.

Our mothers slept on the floor next to our sick beds lest the fever claim us. Our mothers were born to be mothers, hoping one day to be called Mammone, Grandma. They dreamed of those grandchildren their celibate daughters would not be giving them. Our mothers kept our pictures in bedroom shrines. Every day they looked at us in our religious habits, so beautiful, so holy. Our mothers figured they had a direct line to God.

When we entered the convent, we were each given a small white bed in a large white dormitory. At night we disrobed under white nightgown tents, our earthly garments falling in a pool at our feet. We lay in identical beds, each surrounded by thick white curtains to form a small white space called a cell. When the lights went out, black bats squealed, darted from hideouts, and swooped over the beds.

It was the same small, narrow bed in every convent we lived in, always provided by the pastor. The beds faced the red brick wall of the church. The beds faced gas stations, laundromats, and grocery stores. The beds were situated 100 yards from the railroad tracks. At night we watched travelers eating and drinking in well-lighted cars, a blur of hands lifting forks and wine glasses. Sometimes in our single beds we dreamed about the lives these bright people led, their beautiful homes, the laughing children leaping into their arms, the tall, smiling husbands.

One by one the convents closed. In no time they were converted into homes for battered women, retreat centers, catechetical schools, and libraries. The ghosts of the Sisters who died in the convents roamed in dismay from room to room. The convents we left were turned into soup kitchens, credit unions, and parking lots.

Undaunted, we carried the beds wherever we were needed. We slept in shotgun houses on migrant farms. We slept in low-income apartments for seniors. We slept above Chinese restaurants, drugstores, thrift shops, and saloons. We slept in trailers parked in remote rural areas and in the back rooms of the clinics we ran. We slept above funeral parlors and answered night calls. During the day we comforted the bereaved and prayed with them at the cemetery. When the rectories closed, we moved in, became church administrators, and slept in double beds.

All of the rooms we lived in were borrowed. In every house there was a small gold box where Christ lived, so that to recover the box was to hear intimate conversations.

In run-down neighborhoods we fell into sewers where we treaded water until help came, like our mothers had taught us. We fell off roofs at Habitat for Humanity buildings. We fell down dark stairs in religious ed centers and were left crippled. We fell from favor when we changed into secular dress. We fell from grace and helped each other to rise.

We ran in sweats with an Olympic torch held high and our veils blowing, and we did not fall. We ran marathons and held hands as we crossed the finish line. We ran from God, who dogged us down the labyrinthine ways of our own minds. We ran for public office and had to leave our communities. We ran across sunny beaches with our arms extended into the joy of the day. We ran with arms extended into the arms of the ones we would marry. We ran from a church we no longer believed. We said, “Life is an Olympic event.”

We said that our Olympic medals were the profession crucifixes we received the day we vowed poverty, chastity, and obedience. These crucifixes won us entry into sick rooms and jails, weddings and funerals, board rooms and huts.

We ran with them to South Africa to serve and discovered that Christ had got there before us. We stomped dirt floors with brightly clad women, their bare breasts bobbing to native beats, their babies strapped to their backs. Off in the distance, mountains of gold dust glistened in the scorching sun.

We ran to Central America, were captured and chained in small flotillas plowing swampy waters. We were seen on American television by our distraught communities. They saw us crouched low in the boats and heard the bullets flying over our heads.

At the finish line we held each other’s hands, kissed each other’s brow, and wept. We said, “Into your hands, O Lord, we commend her spirit.”

Early mornings the sun lights up the dewy grass so that it shimmers. Each blade of grass holds a tiny globe of light on its tip. We were those globes, divinely lit. Each new day we held our lights aloft. Together we moved over the fields, up the hills, down the valleys, and across the earth. Such a shine of gladness was in our hearts. We were called Sisters.