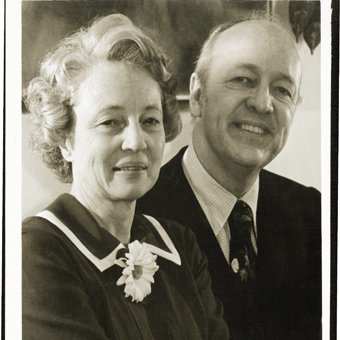 Pat and Patty Crowley will always be Pat-and-Patty to me—individuals but inseparable—even though I only came to know them through Patty alone. Pat died in 1974, shortly after my wife and I joined the Christian Family Movement. We didn’t know then the power of CFM and its straightforward approach.

More than two decades later my wife and I were among the couples who regularly met at Patty’s apartment to prepare for the CFM’s 50th anniversary conference in 1999.

I learned from these meetings that Patty probably did not have a long “to do” list. Every time some question came up, she would go to the phone and find out whatever it was we needed to know.

What I learned from Patty about faith and family and spirituality and social justice—both in and out of those meetings—was simple, untheoretical, and practical. I’m still trying to practice what she preached and what she lived: to observe, to judge, and to act, with the emphasis on acting. Things only happen because someone wants them to take place.

Father Edward Hamel, a CFM chaplain in the mid-1970s, said that the first covenant “was between God and Adam and Eve as a married couple.” Patty thought so, too, and acted on her conviction.

In 1943 Pat Crowley was part of a Catholic Action group. True to the times, the group was men only. Patty started meeting separately with the wives of the other group members. But then the Crowleys together invited a few of these couples to join them for a weekend. From that unprecedented step, the Christian Family Movement began.

By 1952 CFM was established in 97 U.S. cities and 21 foreign ones. These new groups were personally ignited for the most part by that attractive young couple from Chicago, Pat and Patty, and their growing family.

From the start the Crowleys insisted that the two essential elements of CFM would be membership of married couples, not separate groups for men and women, and they would use the “inquiry technique,” which Pat and Patty adapted from Cardinal Joseph Cardijn of Belgium.

Cardijn encouraged people to observe social conditions, judge them in the light of Christ’s teaching, and act to make things better. “Observe, Judge, Act” worked then and it works today, for CFM families and others, married and single alike.

In 1963 the Crowleys took this technique with them to the Papal Birth Control Commision, on which they were one of only a few married couples to serve. They surveyed CFM members and brought their concerns to the Vatican. They were surprised and deeply disappointed when the commission’s recommendations were overruled in the 1968 encyclical Humanae Vitae.

But they continued their powerful work of active family spirituality. CFM always encouraged families to get beyond works of charity and into social justice. “We became involved in how families were affected by what was going on in the community and the world,” Patty said in a 1991 interview in Salt. “This wasn’t a soft, mushy group. We had an action group.”

Scripture study was also a part of every meeting from the beginning. “The scripture that most affected our lives and the whole working of CFM was Matthew 25: ‘Feed the hungry, give drink to the thirsty,’ ” said Patty. “We all began to understand that marriage was more than just the love part, it was what we did together.”

What Pat and Patty did together culminated in 1974, when they organized and celebrated Familia ’74 in Tanzania. CFM influence had overflowed from the home to the neighborhood to the whole world.

“After my husband died, I realized the discrimination that existed in society against single women,” Patty observed. She judged. She acted. She started a shelter for women in Chicago and began to visit women in prison every Sunday—a practice she continued until her death last November.

Patty Crowley was buried next to her husband following her funeral in Chicago’s Holy Name Cathedral. It was the same place where Pat’s funeral had been celebrated three decades earlier and where Pat Crowley and Patricia Caron first met in 1934.

Her funeral was celebrated in the presence of their children, foster children, priests and bishops, criminals and homeless people, and many others grateful for the Crowleys’ work and life. A note was read there from Notre Dame’s Father Theodore Hesburgh. He hoped Pat and Patty would be the first modern married couple to be canonized.

Pat and Patty. They will always be Pat-and-Patty.