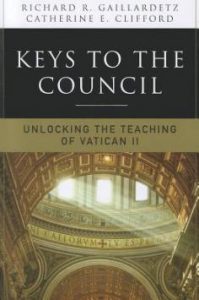 October 11 marks the 50th anniversary of the opening of the Second Vatican Council. While the church continues to be roiled by debates over the council’s meaning, an increasing number of Catholics have no personal memory of it. “What exactly was Vatican II?” they might reasonably ask.

Keys to the Council: Unlocking the Teaching of Vatican II provides the beginnings of a good answer. Written by theologians Richard Gaillardetz and Catherine Clifford, the book helps readers navigate the 16 documents and 12,000 lines of text produced by the council.

The authors’ approach is to highlight key passages from documents and use them as a window into one or more of its key themes. To introduce readers to Lumen Gentium (Dogmatic Constitution on the Church), for example, the authors begin with the ringing language of its first paragraph, which compares the church to a sacrament, “a sign and instrument . . . of communion with God and of the unity of the entire human race.”

One of the strengths of this approach is that it helps the reader understand that Vatican II did not emerge fully formed from the brow of Pope John XXIII. The book reveals the world behind the event, highlighting the people and movements that shaped the church in the decades prior to the council. At the same time, the authors’ interpretations are solidly grounded in the texts themselves, free from any vague appeals to the “spirit of Vatican II.”

If the book has a weakness, it may be a somewhat cursory treatment of debates over the interpretation of the texts. These, too, are important “keys to the council.” As the authors no doubt would agree, the meaning of a sacred text is found not only in the words themselves but also in its reception by the community that holds that text to be inspired.