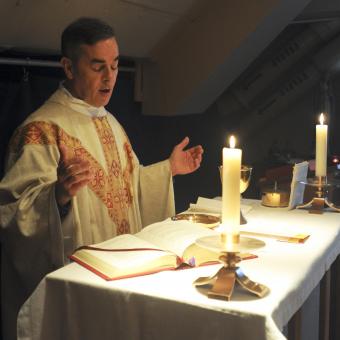 A few years ago the Vatican issued a revised version of the General Instruction of the Roman Missal, the “guidebook” for how to celebrate the Mass. The cover of the document’s American edition showed a part of Jan and Hubert Van Eyck’s magnificent 1432 altarpiece painting The Adoration of the Mystic Lamb.

In this great work the whole of the Christian world—the communion of saints, the apostles, the four evangelists, martyrs, prophets, and even the cardinal virtues—stream in from the four corners of the earth to worship before the fountain of the water of life and the paschal lamb, who stands serenely on an altar, a small stream of its blood spilling neatly into a waiting chalice. Little further symbolic statement was needed that “the holy sacrifice of the Mass” had not gone away, obscured in a haze of alleged post-Vatican II liturgical irreverence, but was in fact back, and with a vengeance.

The term “holy sacrifice of the Mass” can, however, have the unfortunate effect of implying that the entire Mass is mainly and even exclusively a sacrifice. That’s unfortunate because the Mass is many things. It’s an assembly of the faithful, the body of Christ made visible. It’s the celebration of a sacred meal and communion with the risen Lord and the church. It’s a prayer of thanksgiving. And, yes, it’s also a sacrifice.

The Mass is a sacrifice because it brings together two “sacrificial moments”: Jesus’ last meal with his disciples and his death on the cross. When Jesus called the bread and wine his body and blood he was joining the offering of the meal with his self-offering on the cross.

The Mass does the same thing in reverse order. It continues the sacrifice of the cross in the reenactment of the meal. The purpose comes directly from the mouth of Jesus: The “blood of the covenant . . . shed on behalf of many for the forgiveness of sins” (Matt. 26:28). Or, in the resounding words of the Council of Trent in 1562: “This sacrifice is truly propitiatory. . . . For by this oblation the Lord is appeased . . . and he pardons wrongdoing and sins. . . .”

The Mass, then, is a real sacrifice, Christ’s once-for-all offering of himself that nonetheless happens again and again for the benefit of the church. It is an opportunity for the assembled community to join itself to Christ’s gift of his life and imitate it in their own sacrificial love.