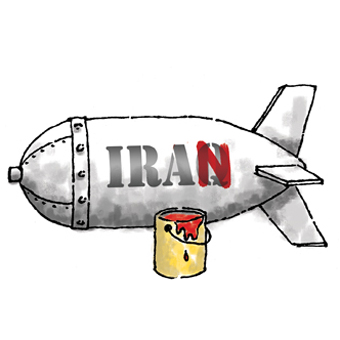 Arguments for U.S. military action in Iran feel like a case of deja vu all over again.

The dangers of war erupting this year with Iran are the greatest they’ve been since the hostage rescue misadventure in 1980 left eight soldiers dead in the Persian desert. Goaded by warhawks in Congress and Israel, and with emotions and political posturing unnaturally heightened by the presidential election season, the Obama administration is coming under fierce pressure to either resolve the Iranian “problem” or offer the Israelis a green light and U.S. assistance to take care of Iran on their own.

As tensions rise, Israel and Iran continue a covert war that could easily spiral beyond either nation’s intentions, while U.S. forces run dangerous navy patrols in the flashpoint of the Straits of Hormuz.

Having just emerged from nearly a decade of war in Iraq and still struggling to shake off what is beginning to look like a hopeless effort in Afghanistan, and with the economy still fragile and the entire region a tinderbox of political turmoil and resentment, the notion of yet another U.S. conflict in the Middle East seems absurd. Yet pundits and politicians, ably assisted by the powerful voices of the Israel lobby in Washington, are at it again, attempting to soften U.S. public opinion with fresh rationalizations for a new and, according to international laws, illegal elective war.

As costly and devastating as the Iraq adventure turned out to be, a conflict with Iran offers the potential to be a thousand times worse. A U.S.-Israeli strike against Iranian nuclear facilities seems certain to cause a wider regional war. Some on the Israeli right are openly proposing the use of tactical nuclear weapons. A preemptive assault would probably provoke an explosion of terrorism against U.S. targets around the nation and the world as well as attacks on Israel from Iranian surrogates Hezbollah and Hamas. It would also likely cause a crippling spike in worldwide oil prices and an environmental catastrophe of unprecedented proportions.

The risks seem grossly out of balance with the possible gains, especially as U.S. intelligence sources report that Iran has not committed its “research” to weapons production and remains open to a negotiated settlement and the return of nuclear inspectors. Ultimately even Israeli defense analysts allow that Iran would not be willing to come to body blows with Israel, an undeclared nuclear power.

The U.S. bishops have been distracted by a rhetorical war over religious liberty and contraception, sadly, because the clarity of their voice on this actual war with Iran is notable. In a March 2 letter from Bishop Richard E. Pates of Des Moines, Iowa, chair of the U.S. bishops’ Committee on International Justice and Peace, to U.S. Secretary of State Hillary Clinton, the bishops expressed their concern over “an alarming escalation in rhetoric and tensions.”

As they did before the beginning of the Iraq war in March 2003, the U.S. bishops repeated their misgivings about the concept of preemptive war. “In Catholic teaching, the use of force must always be a last resort,” Pates wrote. “Iran’s bellicose statements, its failure to be transparent about its nuclear program, and its possible acquisition of nuclear weapons are serious matters, but in themselves they do not justify military action. Discussing or promoting military options at this time is unwise and may be counterproductive. ”

Opinion polls in both the United States and Israel run strongly against an attack on Iran, but if this confrontation is to be avoided, the people of both nations need to speak up to their leaders—loudly—now. Before the Iraq war the U.S. bishops and the Vatican challenged the moral legitimacy of pre-emptive war-making, charging that the concept fails both the precepts of the just war tradition and, when the many risks and hazards of such an adventure are calculated, common sense.

That is a message that the bishops and the people of God must persist in taking to Washington until they are heard and this completely foreseeable disaster is prevented from occurring—again.­